"Give Up" These Outdated Stereotypes

Baltimore is full of anti-sex billboards that propogate the troubling notion that women are the only ones standing between themselves and pregnancy or HIV. 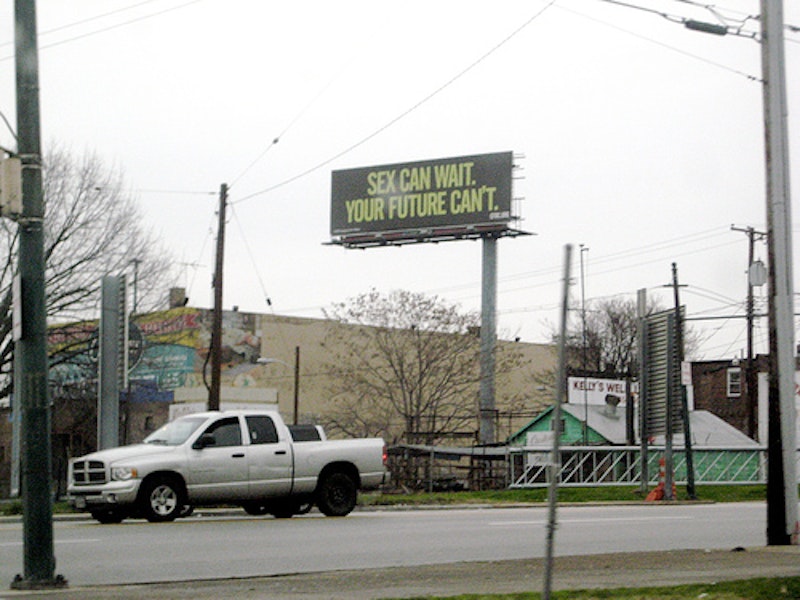 "I don't give it up, and I'm not giving in," read the billboard from the side of the overpass. As my Bolt Bus rolled into Maryland early last Saturday morning, its passengers were greeted by a host of billboards like this one, on which the large block writing was accompanied by the earnest face of a young Latina woman. Good morning Baltimore.

As the bus drove further into the city, I saw similar billboards ("Sex can wait; your future can't"), as well as more from the "I don't give it up" campaign. Each of these alternate versions featured the same message next to a different face, and by the time we reached Penn Station, I'd seen "I don't give it up" billboards representing a range of ethnicities. But across the board, one thing was consistent: the gender of those faces.

This campaign, which appears to be the work of a Baltimore non-profit organization called Campaign for Our Children, was no doubt designed with the best of intentions. Baltimore's AIDS diagnosis rate is the second highest in the nation, with 16, 000 city residents living with HIV or AIDS. In the past several years, Baltimore's teen birth rate has risen to almost double that of the rest of the state. Given this, efforts to prevent new HIV infections and teen pregnancy by delaying or preventing teen sexual activity are entirely necessary. But the "I don't give it up" campaign, which is aimed exclusively at young women, makes the common and potentially dangerous mistake of depicting women as sexual gatekeepers.

The idea of women as gatekeepers, capable of and responsible for keeping men's sexual impulses under control-by not dressing sexily or flirting too much or "giving in" as the billboard says-is far from new. It has its roots in the longstanding belief that women neither want nor particularly enjoy sex, that men are mindless sexual animals who will go to any lengths to get some. These concepts don't enjoy a great deal of basis in fact, of course, but that hasn't stopped them from shaping the way we think about gender and sex for centuries.

The gatekeeper model of sexuality positions women as the designated drivers of sex. Undistracted by lust, women are meant to be sensible and responsible enough to know when to draw the line, and to defend that line when men inevitably try to cross it. In this version of sexuality, women are taught that men will always want to have sex with us, and that they will do anything to get it. Our job as gatekeepers is to either "let" a man have sex with us, or to stop him from "going too far."

Of course, in the real world, women have sexual desires and men have self control. And in the real world, designating women as sexual gatekeepers can have dangerous consequences. Take, for example, the most common form of stranger-rape prevention, which is to warn women not to walk alone at night and to always go out drinking with a "buddy." Women are taught that as gatekeepers, it's our responsibility to ensure that we never put ourselves in the situation where a sexual assault might occur. We are taught that it's our responsibility to avoid those situations because men-those aggressive and sexually insatiable beasts-are unable to curb their desire for sex, even in the absence of consent. It rarely occurs to us that while it's crucial to teach women to be alert, aware and assertive about their personal safety, the only foolproof way to prevent sexual assault to teach men not to sexually assault people.

Similarly, the only effective and ethical way to delay teen sexual activity is to make both men and women responsible for their sexual actions. The language of the billboard plays right into the centuries-old idea of women as sexless creatures charged with keeping men in line. In this model of sexual interaction, sex is a transaction, something a woman gives to a man, rather than a mutually consensual and enjoyable exchange. And while some young women doubtlessly feel pressured to have sex that they don't enjoy, there's nothing in this model that allows for the possibility that women want and enjoy sex. Nor does this vision of sex allow for the possibility that men are capable of approaching sex sensibly and ethically. The result is that when young women choose to have sex, they feel a guilt and shame that young men aren't saddled with. If women are solely responsible for preventing or delaying sex, then having sex represents a failure on their part. But for men-those unthinking, unethical sexual aggressors-having sex simply represents their fulfillment of our very low expectations of them.

Campaigns like the "don't give it up" one are dangerously misguided. It's not acceptable to teach women to be sexual gatekeepers while accepting the inevitability that "boys will be boys." We need to equip all young people to take control of, and responsibility for, their own sexual actions. Young men need to learn to listen when a woman says "no," and young women need to know that, sometimes, there's nothing wrong with saying "yes." Most importantly, we need to teach young people that sex isn't a zero-sum transaction that one person gives to another, but rather something far more complex requiring consent and communication and cooperation.