Ooku, Vol. 4, the latest chapter in a ten-part work. 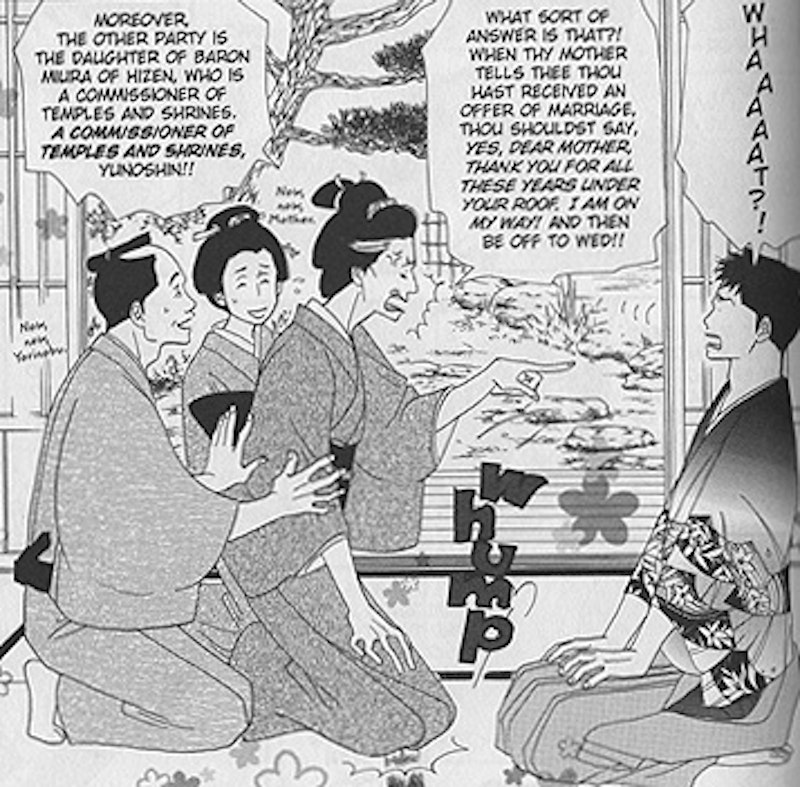 Adam Smith’s invisible hand is perhaps most effective when it’s giving you the finger. If capitalism doesn’t disappoint you, it’s not doing its job. The whole system is based on raising expectations and then dashing them, so desire is never fulfilled and money can continue to flow from your pocket down, down, down into that giant desperate hole in your psyche. The Platonic capitalist product is an intricate, wonderful something that breaks a week after the warranty expires.

For cultural goods, the analogue of planned obsolescence is called, as most everyone knows, “jumping the shark.” The phrase—which itself has jumped the shark—used to describe the moment when any serialized entertainment gratuitously abandons its dignity and begins to suck with an almighty suckage. Think of the episode of The Cosby Show where Cliff gives birth to a hoagie and a bottle of orange soda. Or don’t think of it. I’m trying not to.

I’d rather not think about the manga Ooku, vol. four either. The first three volumes in the series were among my favorite purchased cultural objects of the last couple of years. Written and drawn by Fumi Yoshinaga, Ooku is a costume drama set in an alternate past where most men in Japan have been killed by a plague. The story centers on the Ooku, a harem of men locked within the (female) shogun’s palace, where the hothouse atmosphere breeds romance, intrigue, rape, humiliation, gender-bending, and unrequited everything. Yoshinaga has a deft touch with characters and a fine sense of tragedy, and she managed to make me cry at least once in each of those first three books. Which is what I want from my melodrama.

And then…book four. On the surface, it looks more or less like its predecessors. A sequence involving the shogun Tsunayoshi, for example, is elaborately and intricately painful. The female ruler, bored with the men in the Ooku, goes to visit one of her old noble friends…and demands to sleep with the other woman’s husband. Eventually she grows tired of the husband and starts to demand to sleep with the (married) son. The shogun seems to actually love (in some sense) the old friend, and the husband, and the son, so that she grieves (not entirely hypocritically) when her twisted affection inevitably destroys all three. So there’s outsized emotion, unhealthy desires, tragedy, sex, cruelty and despair. Which seems like it should be the stuff.

And it is the stuff. If this story were what the book was about, it would’ve matched its predecessors.  Bu it doesn’t. Or rather, it’s only a small part of it. The whole episode rushes by in a fraction of the narrative—it takes up 30 pages or so out of 200. The rest of the book piles incident on incident; this young shogun falls in love with her mentor/father figure; that scheming interloper works his way up to a position of prestige in the Ooku, there’s a fire racing through Edo, the proportion of men in the country goes from one-fifth of the population to one-fourth, and on and on. There’s not enough space devoted to any of the characters for them to take on actual personalities or weight, and so it ends up reading more like a textbook than a story. You feel like Yoshinaga’s summarizing the history of the world in three paragraphs so you can take a test at the end of the chapter.

It’s fairly clear what’s happened. Early on in the series, Yoshinaga’s strengths are her characters, and her willingness to take the time to explore them. The first three volumes, therefore, move slowly; they focus on one or two individuals. In volume four, though, Yoshinaga apparently realized that if she maintained this pace, she wouldn’t have a chance to get to all the clever ins and outs of her alternate history. And so she starts to rush. And in her hurry she accidentally leaves behind her heart.

Perhaps, over the course of her projected 10 volumes, Yoshinaga will regain her perspective, slow down, and create more stories that feel like stories rather than like hurried outlines.

Still, there’s a certain painful symmetry to watching this volume turn its back on everything that made the series worthwhile. The first few volumes of Ooku were great precisely because they made you feel history not as a series of events, but as a vast iron weight, beneath which people and dreams and love were inexorably crushed. A plague pushes you this way, a shogun pushes you that way, and you end up with your family in tatters and everyone you love destroyed.

Maybe I was hasty in ascribing God’s middle finger to capitalism alone. Perhaps, as Buddhists would argue, desire eroding the soul over time has a broader application.  Stick around long enough and you’ll eventually be reincarnated as some leather-jacketed moron playing second fiddle to a bucketful of rubber carnivores. Or if you’re lucky you’ll just write a mediocre manga.