What’s So Wrong With Jersey Shore? 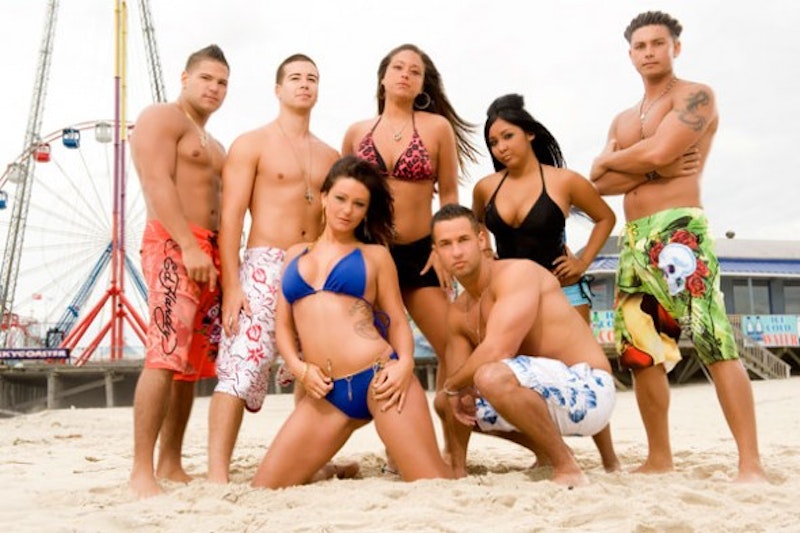 Okay, so the other day I poisoned my eyeballs and brain cells with an episode of MTV’s Jersey Shore. L-o-r-d Jesus! I didn’t know that white people, as the example race, could reach a hot mess of this level.

Jersey Shore is MTV’s trendy new reality television concoction that follows the lives of eight people trapped in a beach house on the New Jersey Shore. A recipe for disaster! But the show is so much funnier than the run-of-the-mill Real World-style reality show. We follow a group of self-described Italian-American “Guidos” and “Guidettes,” with names like “Snookie,” “JWOWW” and Mike “The Situation,” who totally rake in the ghetto points. So much that the Italian Mafia threatened to blow up MTV because they think Jersey Shore promotes bad stereotypes of Italian-Americans.

Harmful Stereotype Number One: All Guidos Have Crispy Hair. Of the four dudes on the show, I can barely distinguish between them because they all have the same “porcupine” Gotti-brothers hairstyle. I know you know the one I’m talking about. Hair so crispy when the wind blows it crunches like a Dorito. In the opening montage, we see the Guidos filling up an entire suitcase with hair gel!

Harmful Stereotype Number Two: All Guidettes Are Dirty Nasty Hos. These trollops walk around almost naked, junk n’ thangs just exposed. Ladies when you go out, I’m gonna need your skirts to be just a touch below the cooch. Not on top of it. Below it.
Harmful Stereotype Number Three: All Guidos/ettes Are Orange And, Hence, Unintelligent. Now look, if you want to be tan, by all means, knock yourselves out! But when you are on the verge of orangeness, it’s, like, time to stop. People with orange skin are my arch nemesis.

I don’t know about you, but these don’t seem like stereotypes, because the characters are totally stoked to serve up the Guido. “Hey, I’m proud to be a fuckin’ Guido!” says Mike “The Situation.” Especially if you live in New York, New Jersey—the headquarters for guidom—you’re all “OMG this is SO true!” I can’t tell you how many orange skinned crispy haired trollops I’ve seen hanging out in bodegas and outside strip clubs in Queens. The show amounts to a big ol’ joke, with the cast members and the producers being in on it.

The real issue, for me, is that Italian-Americans are royally pissed off about Jersey Shore, but black people have had to live with three seasons and countless replays of Flavor of Love. As far as I know, nobody threatened to blow up BET or VH1 every time Flava Flav pops up. I can’t stand Flava Flav’s ugly ass! And don’t get me started on that damn clock! I used to watch that show in amazement wondering how anybody would compete to date him.

Why is it that black people have dealt with—and even happily consume—stereotypes on television, from blaxploitation cinema to black comedy sketches? Just the other day my cousin and I watched Katt Williams’ newest DVD Pimpadelic; here comes Katt on stage in a head-to-toe gray chinchilla coat, pimped way out. But we didn’t cuss at the screen, or send an angry letter to the NAACP. We laughed because we know that that’s not us, but also because we know that some of the stuff he says is plain funny, whether or not it’s true.

But don’t you dare poke fun at Italian-Americans, or else you will get sniped the fuck out. What’s that double standard all about? Film scholars like Richard Dyer have suggested that to be white is to be invisible, under the radar, everywhere but not really noticed. White can only exist if there is something dark and negative (black!) to prop it up against. So that’s the real issue, if you ask me: that Italian-Americans can’t deal with the stereotypes, even if the characters are willingly portraying themselves as orange crispy haired Guidos, because it makes us focus on bad stereotypes.

Jersey Shore is a huge publicity stunt. But where do we draw the line between cash, comedy and blackface?