Moving past his "creative toy bootlegging."

You can find a Sucklord interview with Format Magazine here. 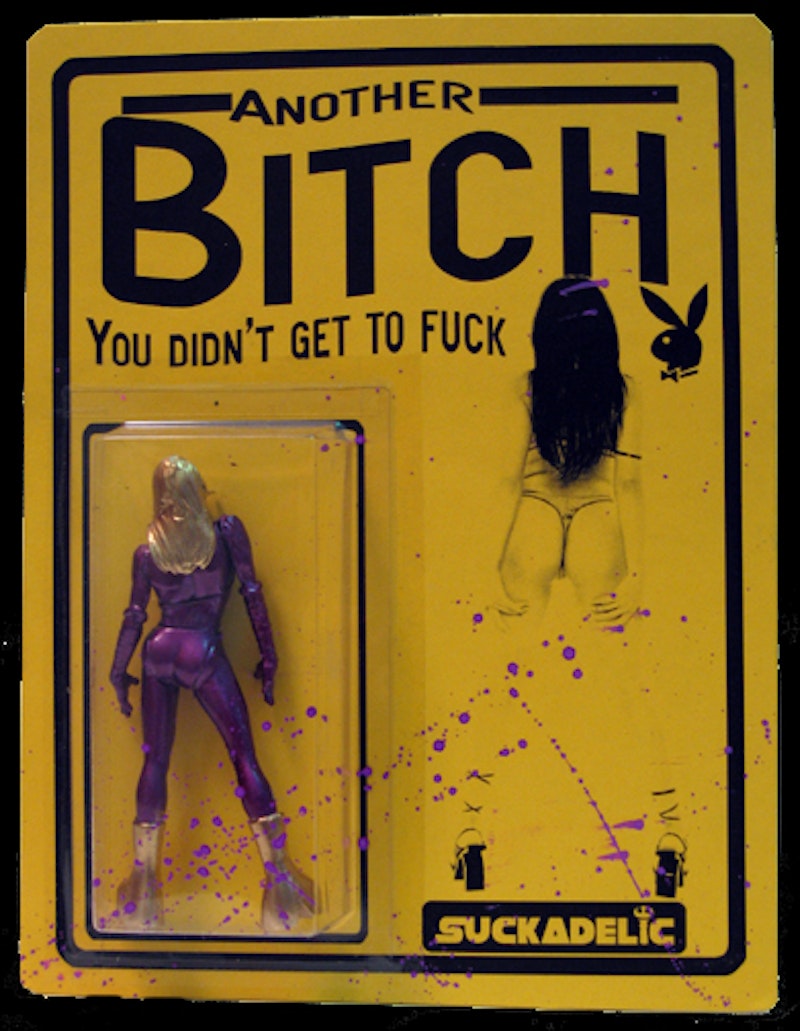 As an old school action figure dork, and an equally old school art dork, I’m probably a bit over exuberant when the two worlds crash together and leave a tangled, smoldering, plastic mess behind that I can delightedly pick through.

I’ve always seen the Sucklord as one of the forefathers of the burgeoning underground art toy movement, which seems to originate at his series of remixed Star Wars bootlegs and is currently flowing through Mark Ryden’s YHWH, and into destinations unknown. Not only does it take a lot of guts to borrow from the notoriously litigious juggernauts of LucasFilm and Hasbro, but it also takes a lot of really intelligent pop culture sensibility. A few years ago, the legitimacy of Sucklord’s work received an official kind of confirmation when LucasFilm actually called upon him to curate a set of original Star Wars art trading cards, which would be released as an official Star Wars product. Last year, he was called upon again to do the same. (Full disclosure: I was one of the contributors in the latter set.)

The Sucklord would likely dismiss all these impressive labels, meanings and accomplishments. Disinterest in what it all means is one of the most attractive things about the whole situation. His resin casting tutorial piece in action figure mag ToyFare was a huge inspiration for me to start casting my own pieces.

The collection of Sucklord’s bootlegs refer to a cadre of geek references, from figures with Dungeons & Dragons dice for heads and a liberal number of Sleestaks, to anime weirdness (which are two words that should never appear too far apart), and a whole lot of healthy id. His 3 3/4” sculptures include such figures as “Another Bitch You Didn’t Get To Fuck,” the “Galactic Jerkbag” from FuckfaceVille, and the all-pink Galactic Empire Homotrooper, which has been embraced by the gay community.

Sucklord is one of the creative elements responsible for the ongoing convergence between the nerdy, off-putting world of action figures and the equally intimidating world of art. He’s somehow created something enlightening and accessible with these factors. Where does sculpture for the sake of pop collectability end and art start? Is there even a difference?

Now, 10 years after musician Morgan Phillips started casting his own action figures from bits and pieces of other action figures, this variety of figures is done, and he’s going to “do something different. Better, and different.” He’s a creator to watch, because the next 10 years are probably going to be just as awesome.