Whether you're a racing or casual cyclist, you're probably pissing someone off. A few tips... 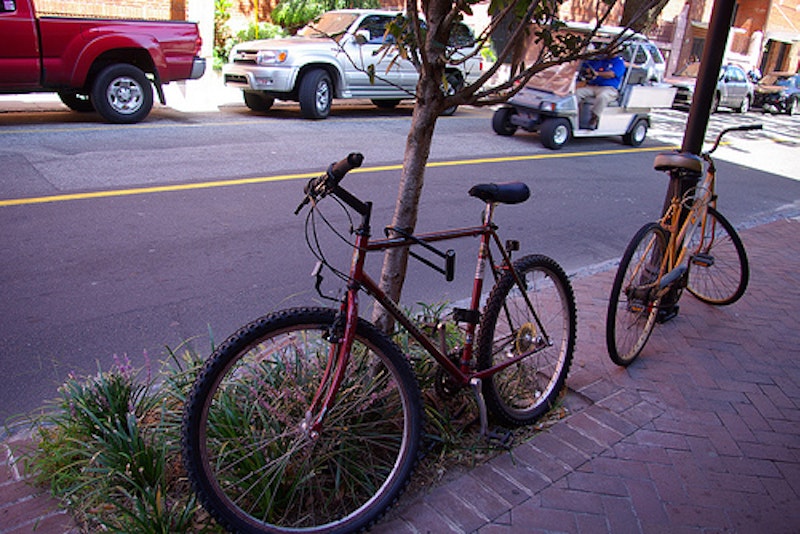 A bicycle boom grips America. Just a few years ago bicycles were the domain of smug West Coast tree-fondlers and people who had lost their driver's licenses to DUIs. Gone are these utilitarian days. Now, in 2009, one may stand for an hour on any street corner and by relatively easy calculations determine that tens of thousands of dollars worth of high-performance bicycles have passed you by.

This observation is picturesque as well as edifying: the shining bicycles' stickers and reflectors whirl merrily in the sun, the cardiologists who purchased them furrow their brows as they try to remember which lever downshifts and which upshifts. Triathletes, about whom no one even spoke until around 2005, appear freely in public and clog the roadways, their elbows planted on the 10-point antler rack that passes for handlebars on their Quintana Roo tri bikes. Clusters of water bottles ride behind their saddles like an unmentionable boil. Here in Iowa City, college students sail placidly down every sidewalk, their heads innocent of helmets, their chains innocent of lubrication, and their tires innocent of air. Their upright posture and generally glassy eyes indicate a fervent, almost religious focus that evokes a patriarch contemplating an icon, or the opaque and murderous stare of a hunting reptile.

All this you already know; a thinking human in 2009 is aware of the throngs of bicyclists who circulate through our cities. Yet relatively few people understand the recondite rules of being a bicyclist. I present them here for education of the cycling public and also so that those motorists who are puzzled when bicyclists scream at them might gain insight into the cyclist's psyche.

The rules of bicycling etiquette apply differently to cyclists occupying different social positions; one must determine one's caste before understanding how one should behave.

Racing cyclist: Defining oneself as a racing cyclist hinges mostly on equipment; one need never actually race in order to class oneself as a racer. Many cyclists find it convenient to eschew the hurly-burly and sweat of actual racing by simply purchasing and storing a road bike costing more than $1500; this entitles them to check the "racing" category on any bicycling website they might join while sitting near their air conditioners sipping a cool drink. Within the racing category there are many subtle gradations. Each ascending state of prestige brings with it perquisites and, in many cases, color-coordinated outfits. Judge an expert racer by his refusal to wear any jersey that does not vouch for participation in a past or future race or trumpet his membership in a sponsored team. Contrasting or mismatched shorts reveal an odious lack of punctilio and generally point to deficiencies of seriousness in the racer.

Stock wheels also reveal an insufficient commitment to performance excellence; should you encounter anyone on the bike path with anything less than Reynolds carbon rims you may be sure that they take neither themselves nor bicycle racing seriously. Perhaps other strata of society value this insouciance; it might very well enliven the pitiable lives of starving vagrants, who could perhaps derive comfort from the attitude's disdain for material niceties. It has no place in cycling and must be met with opprobrium.

When in uniform and astride the bicycle it causes the racing cyclist pain to contemplate lesser bicyclists; woe betide the commuter, casual cyclist or mountain biker who might nod or wave to the racing cyclist! Expect no response in this situation; your greeting disrupts the racer's symbolic order. Did Allied troops lift their hands in pleasant greeting to the Germans at Normandy? Does the eagle nod his sleek head to the rabbit as he stoops upon him from the upper air? Of course not! Nor should you expect a response from a racing cyclist who passes you unannounced on the left, his legs pumping in their sheaths of logo-covered spandex, his finger stabbing at his cycling computer as he attempts to gauge his power output against his past performance.

Casual cyclist (or commuter, which I have covered in some detail previously). Racing cyclists bind themselves in rules and points of comportment. The casual cyclist bears no such fetters. He lives in a world of infinite possibility. Do you wish to drift along a crowded sidewalk, weaving from side to side as you peruse text messages on your cell phone? Do so! Would you like to pedal frantically in a very low gear, frowning in consternation as your bicycle fails to accelerate? By all means! Do you treasure your freedom to the extent of making exciting, unannounced left turns across traffic? It is your prerogative!

The key to understanding casual cycling etiquette is that the cyclist is always correct. He occupies a subaltern position in the hierarchy of vehicles and must therefore be accorded leniency when it comes to law, safety, and grace. Should you inconvenience a casual cyclist by stopping your car at an intersection and thereby requiring him to leave the sidewalk, expect invective. This is, in fact, an invitation to a traditional and extremely creative cultural practice in which you and the cyclist may exchange more or less fanciful excuses for your behavior. Should you have chosen to drive your car along the sidewalk or into a public park you may frown at the cyclist and abuse him for using a "frontage road." Conversely, should you ride your bicycle into, say, Sears, you may make free with your aspersions, shaking your head and frowning at the petty-minded prejudice of your detractors.

You may lock your bicycle to any object. Learning the mysteries of how the bicycle operates is discouraged, as is the ownership of esoteric tools such as a metric wrench or an air pump. Adjustments made to the bicycle should be considered permanent. If your seat is on backwards or if your handlebar tape falls off you must accept your ill luck with phlegmatic reserve. A bicycle deteriorates over a short time and will not be useful after a period stretching from a month to slightly over a year; at that point, it should be locked to a public bike rack and left as an object lesson to others. Any attempt to stem this deterioration constitutes a perversion of the natural order.