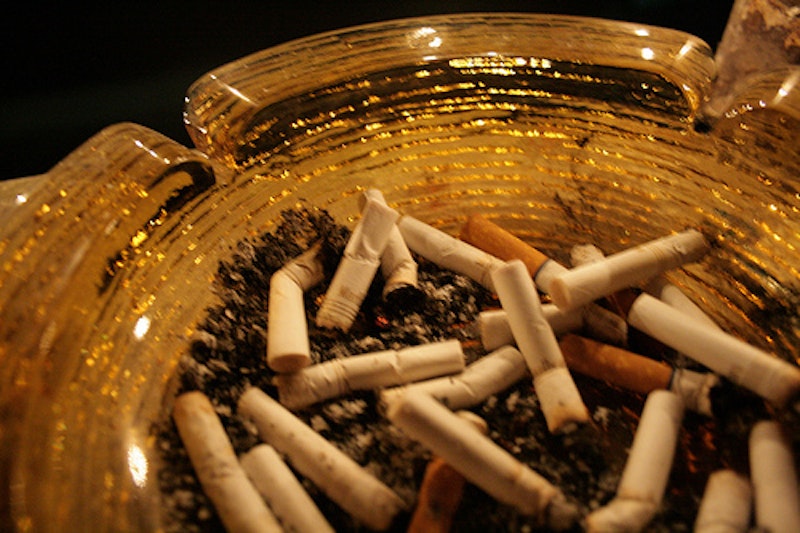 On Monday night, in Fairfax, Virginia, I stopped by the local Ruby Tuesday restaurant, sat at the bar and asked the bartender, Matt Damon-doppelganger Gabe Nasca, for an ashtray. He grabbed one, placed it in front of me, and said, “You can take it home with you”—a keepsake from another era.

Virginia was built on tobacco but Democratic majorities are comprised of the sort of people who want to banish cigarette smoke. Four years ago, Democrat Tim Kaine took the governor's mansion. Two years ago, Democrats made such gains in the legislature that they were able to force through a smoking ban. In theory the ban was lenient. It would have allowed many businesses to continue to maintain smoking and non-smoking sections, by offering customers separate facilities and better filtration systems, but in practice such conversions have proved too expensive, especially in this strained economy.

None of the local bars will allow smoking now that the ban has gone into effect. That meant Monday was the last night that most citizens of Old Dominion could go to a bar and enjoy a cigarette with their beer. I am only an occasional social smoker but it seemed that I should go light one up for this lost cause, so to speak, and see how the regular Ruby's patrons were taking this imminent infringement of one of their ancient liberties.

Their reactions ranged from spirited-but-resigned to hopeful-but-resigned. “I don't like it,” said a conservative, Bill Vierregger. “The government of Virginia is trampling on my rights.” Vierregger argued this “never would have happened under a Republican administration." However, smokers aren't holding their breath for the incoming Republican Bob McDonnell administration to try to reverse the ban.

Catie, a liberal, said that the ban would give her an excuse to quit, yet she seemed to inhale a little more deeply than usual. John, a regular and smoker with no discernible ideology, said that he was against it, on balance, but he didn't “feel that strongly against it.”

At one point in our conversation, he moved his barstool to the right and made sure to exhale far away from a businessman several seats to his left, who had muttered something about not liking all the “damn smoke.” John likened the ban to the social necessity to remove his shoes whenever he would visit his Chinese friends' houses. On the other hand, he questioned the claim that a ban was needed for the workers. Wanting to work in a smoky bar but not have to deal with smoke was a bit like saying, “I want to work in a strip club but I don't want to take my clothes off,” John said.

One regular asked Gabe if the chain restaurant had “taught you how to deal with us, when we come in and can't smoke.” Imagine a dozen or so regulars alternatively jonesing for a cigarette or braving the winter weather to smoke outdoors. Gabe said he didn't like the ban but didn't have any recourse: “I smoke. Where am I going to go?” As Monday night wound down, the crowd at Ruby's watched the Saints stomp all over the Patriots on the bar's new big screen, joked, flirted, drank more beer, burned more cigarettes, and wondered why it was that the next night this would be against the law.