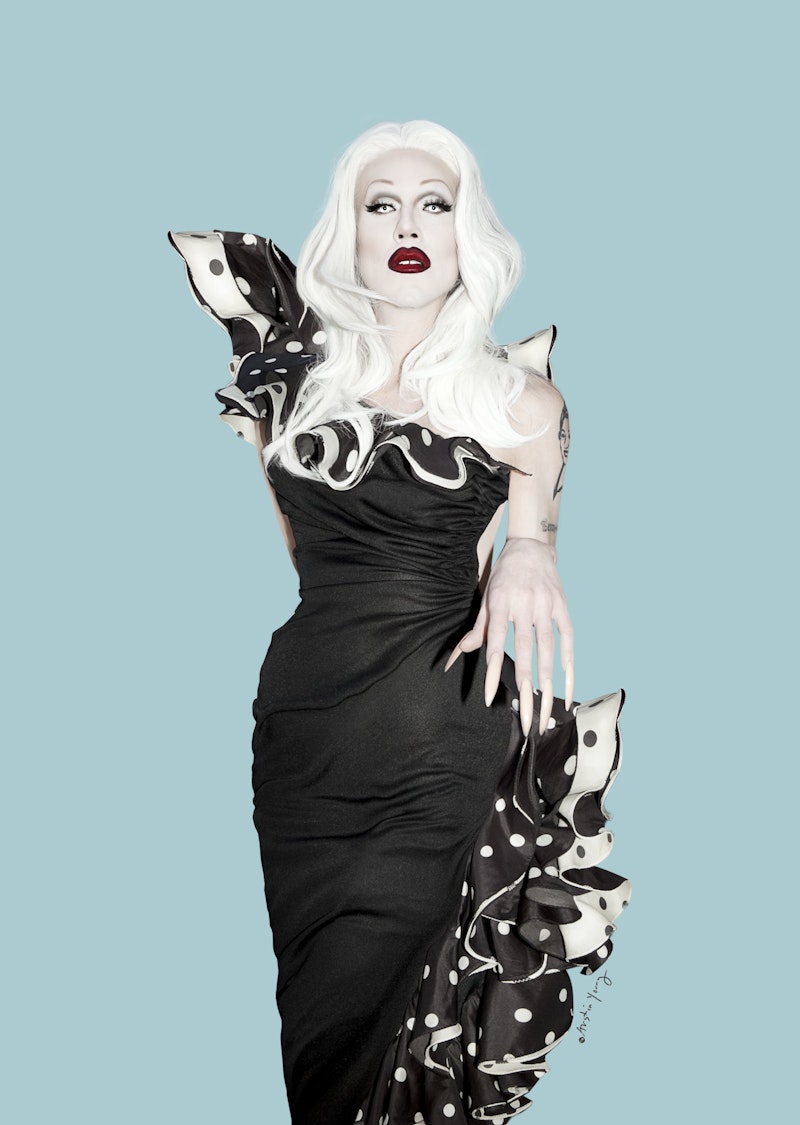 I knew by the second episode of RuPaul’s Drag Race Season 4 that Sharon Needles would snatch the crown as America’s Next Drag Superstar. Sure, there were 11 other queens on the show, but La Needles was one ghoulish bitch who was really letting us have it. Before you go all Phi Phi O’Hara and try to read Miss Needles for only having one deadly look, just know that there’s more to Sharon Needles than meets the Ouija board. Behind the plastic surgery bandages and underneath the lifetime supply of NYX cosmetics is an extremely intelligent, hilarious, subversive, Peggy Bundy impersonator from Pittsburgh with a dream—and a wardrobe from hell.

Get used to this downtown clown, because Sharon Needles will be, if she is not already, a household name. Since winning Drag Race, she’s performed on stage with the Scissor Sisters, this summer she appears in a sold out parody of The Silence of the Lambs titled—what else—The Silence of the Trans. And I’m just dying for Steven Meisel to throw her in an Italian Vogue editorial.

I caught up with La Needles and we talked about fame, the power of “shock” art, not being a role model, and Peggy Bundy.

Splice Today: I saw you Tuesday night at The Standard Hotel in New York City for the first ON TOP party of the summer, where you were billed as the “Guest HOst.”

ST: It was a hot party! How did you get hooked up with ON TOP promoters Kayvon Zand and Susanne Bartsch?

SN: You know, I’ve worked with Susanne in the past. Susanne always said, “Sharon, darling.       I always see a star in you.” She used to book me for quite a few things, back before I won RuPaul’s Drag Race—even when I lived in Pittsburgh. I would just take a $50 bus to New York and I’d work with her at The Box, Vandam at Greenhouse, and I’ve done ON TOP before.

ST: Oh, work! She and Kayvon are just so fabulous—I love what they do for nightlife in New York City. ON TOP is known for encouraging crazy costumes. What did you think of some of the looks?

SN: Last night it was a little amateur; it looked like a bad Halloween party. I mean, it goes up and down. Of course Kayvon looked fantastic, Dylan Monroe looked fantastic, Jordan Fox looked fantastic, Susanne Bartsch looked epically ghoulish, my boyfriend, of course, Alaska Thunderfuck was serving ketchup realness. But you could tell it was the opener of the new season because there was a lot of lackluster, kind of slop jobs there.

ST: Oooh, the shade of it all.

ST: One thing I noticed last night is that fans kept coming up to you to tell you how much you inspire them, and I was interested to hear how you deal with the responsibility of being a role model.

SN: Well, I never wanted to be a role model. All of my idols and role models weren’t role models—they were drug addicts or violent people or misunderstood people or people who committed suicide. So I don’t want anyone to look at me as a role model, but if someone sees a message in my art, you know, to not give a fuck and do what they want, that’s great. And I don’t mind when fans come up to tell me how I’ve helped them learn to express themselves. I guess I wish they would spend a little more time just being a person with me, but I know what I am to them. I’m an enigma of television fame.

ST: Is it hard dealing with this level of fame?

SN: It’s definitely not what I thought it was. The one thing I learned about fame is it’s not a feeling, you can’t feel your own fame. So I’m completely unchanged and unfazed by it. And that’s something I never realized. I thought fame was a feeling of status. I do still get a great thrill when I’m recognized on the street and people just can’t believe that they’ve run into Sharon Needles at the Duane Reade or wherever.

ST: One of my favorite looks of yours from Drag Race was...I guess you’d call it “Plastic Surgery Realness.” It was very Italian Vogue—the one with the face bandages and you carried the Botox needle down the runway and RuPaul goes, “Yes... just a little... bit... more.”

SN: [Laughs] Yeah... just... a... little... bit... more. The look was really inspired by a lack of time to do makeup. It’s a look I’ve done before in a pinch. Like Phi Phi [O’Hara] says, “Just do the one look you got.”? Well, I think out of any queen on RuPaul’s Drag Race history, I showed the most versatility than anyone because every look was inspired by what created Sharon Needles. That episode was showing my heartfelt love and admiration for people like Pete Burns, Amanda Lepore, and the glamorous Monique who put their bodies and sanity on the line for cartoonish, inflatable beauty. And that’s something I love so much.

ST: There seems to be a lot of early RuPaul in your character. Do you see Sharon Needles as an intervention in the history of drag?

SN: I think RuPaul saw a little bit of herself in all of the top three. I think in Chad Michaels she saw a very polished, industry standard who keeps it cute at all times. In Phi Phi I think she saw a cutthroat person who will step on anyone to get to the top, no matter how lonely it leaves you. And I think she saw her beginning in me—an artistic, outsider-art drunk weirdo whose main thing is about being a drunk, downtown clown. But thank you for seeing early in RuPaul in me because she really has inspired me my entire career.

ST: I mean, one of my favorite books is RuPaul’s autobiography Lettin’ It All Hang Out, and when I saw you on Drag Race I had these flashbacks to reading that book and the kind of gender fuck, punk rock drag that she was doing in Atlanta.

SN: If you like that history there’s another book by another Atlanta queen called, Man Enough to Be A Woman by Jayne County who is also just a huge inspiration for me.

ST: So can I say that I love your Peggy Bundy number? Is Married With Children a show you watched a lot as a kid?

SN: When I was a kid all I wanted was to be Peggy Bundy. I grew up in a small town in Iowa and she had everything that Sharon Needles is—a staunch sense of beauty and a vapid sense of stupidity and laziness. And that’s really how Sharon Needles acts. You know, I never wanted to be the mean, powerful diva bitch. I just wanted to be the stupid kind of ditzy girl that was always kind of bouncing and jiggling. Peggy Bundy was a huge inspiration for me. All my fans expect me to do these kind of horror type characters, but Peggy Bundy is the one number I take to every city. I just live to look like her and act like her. I don’t think there’s a better Peggy Bundy impersonator in the world!

ST: I’ve heard you describe your work as “shock” art and as “transgressive,” and I wanted to get your thoughts on the effect of “shock” and “transgression.” What do those things do when people experience them?

SN: It’s my favorite feeling when I’m watching films or performance art, or in paintings and literature. I just love to have my breath taken away by the sheer audacity of what people can do. And not only is it a punk rock, bratty thing to try to rattle peoples bones, in a positive way it strikes up a lot of conversation about our own social and political anxieties about things like race, religion, creed, and the institutionalized concept of beauty. I get picked on for some of the controversial things I do, but how is that different than Lisa Lampanelli and Joan Rivers, sitting on millions and millions of dollars, but the man dressed up as a female clown is being put under scrutiny. It seems a little ridiculous to me.

ST: Speaking of Joan Rivers, you need to be on Fashion Police.

ST: One of the things I love about Drag Race are all the catch phrases—“no tea, no shade”;  “halleloo!”; “EAT IT.” What’s your favorite Drag Race phrase?

SN: What’s my favorite Drag Race phrase? I don’t know, I like them all. But I will say that on the first season of Drag U, Lady Bunny used to sit on the panel and you got graded by a letter, like A, B, C, D or F. And she would say things like [Lady Bunny voice], “Well I like the dress, the shoes are good, but the lipstick was a little off. D Minus!” So my phrase lately has just been saying, “D Minus!” [Laughs]. It just means you’re not perfect, but you’ll do. “The lipstick’s great, the wig’s incredible, but the confidence level is a little bit off. “C Plus!” [Laughs].

ST: What advice do you have for new drag queens?

SN: Don’t feel bad about not being good because that drag is my favorite kind of drag. There’s nothing more inspiring and entertaining to me than when someone thinks they’re really good and they are just doing absolutely terribly. I mean, that is just entertainment to me! Remember, children, I’ve said it before, and I’ll say it again: being booed off stage is just applause from ghosts. Happy Halloween and Hail Satan!