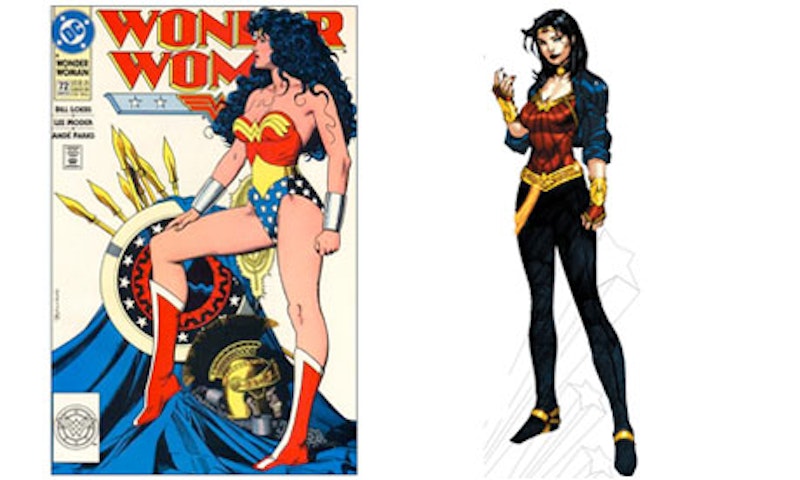 Even if you’re not an avid reader of comic books, you’ve probably heard the uproar about the proposed changes to Wonder Woman’s costume by DC Comics and veteran comic-guy Jim Lee. While I’m all about tradition, the whole upheaval is just a little bit ridiculous. Sometimes, I fear that our attachment to fictional characters can be even more tenacious than our attachment to our own families and loved ones.

I’m not speaking as an outsider, either. I take comics seriously, and my embarrassingly overwhelming collection of graphic novels can attest to that. I draw comics in my spare time, and I go to conventions. Please ignore my Batman steering wheel cover and floor mats. But guys, we’re talking comics.

These anti-change proclamations seem to capitalize on the idea that classic, iconic things should not be ignored, and I agree with this idea—especially when it comes to comic books. Let’s be honest: we’re all still a little itchy from what the 1990s did to comic books. Every hero became gritty, forgot to shave that morning, got some back story that involved a demon touching them inappropriately, bulked up to absurd proportions (or developed zeppelin-like breasts and scoliosis), and had a notebook full of bad catchphrases which they threw around. The 90s ruined the credibility of comic books as a valid creative medium in the public eye, even though the books of that era are a perfect sociological study of how the arrested teenage id manifested itself in grown men. That’s another issue entirely.

So, I can understand where a reluctance to change comes from. However, you’d have a very difficult time finding a single comic book hero or villain who has been around for 60 years and has not seen a series of costume changes. We seem to have forgotten that Batman used to wear purple mittens, and that Iron Man was essentially a garbage can. Spider-Man has had armpit webs, a black costume, and a half-robotic costume—not counting the times he’s been transformed into other creatures for a few issues. I cut off a 15-year-old ponytail a few weeks ago and stopped wearing combat boots all the time. If we have such a dedication to treating these characters as people, don’t you think that they should be allowed to evolve the same way as us?

Comic books are a malleable medium, and a very unique example of a fiction that has been constantly written and added to over a period of over 70 years. Few fictional characters have been treated to this kind of prolonged, active life, but Superman and Aquaman have been pretty lucky. Aquaman, by the way, went from a clean-cut do-gooder to an angry environmentalist with a beard, who then got a hook for a hand, and then became a clean-cut guy with a hand made of water. When it comes to a costume change for Wonder Woman, we act like comics aren’t in a constant state of flux. You can’t be the same person for 70 years, even if this fictional universe treats time as a flexible dimension. Seventy human years of reading stories are still 70 human years. Wonder Woman cannot always be Lynda Carter, no matter what your genitals say.

It’s not about Wonder Woman wearing pants as a feminist statement, or losing her identity as a symbol of powerful womanhood. I’m not even saying that the new costume is a feat of amazing design and artistry, but these are comic books. People die, people change their clothes, people change teams, and we eventually get used to it. Before too long, the time-bullet that shot Captain America will bring him back to the present, Batman’s back will heal, Superman will resurrect himself from the dead all Jesus-style, and everything will come back around. When you do not permit evolution, you promote stagnation.

So, guys, it’s comics. They’re not all great, but the medium is structured in such a way that they can always become great again. In terms of comic book crimes, a small costume change is far less serious than Superboy fixing the DC Universe by crying and punching time crystals in space. Which really happened.

Still want to act so serious?