The Umbrella Academy Feels Like Watching a Comic Book

Are explanations eventually provided for these characters’ motivations? No. Is it fun? Absolutely. 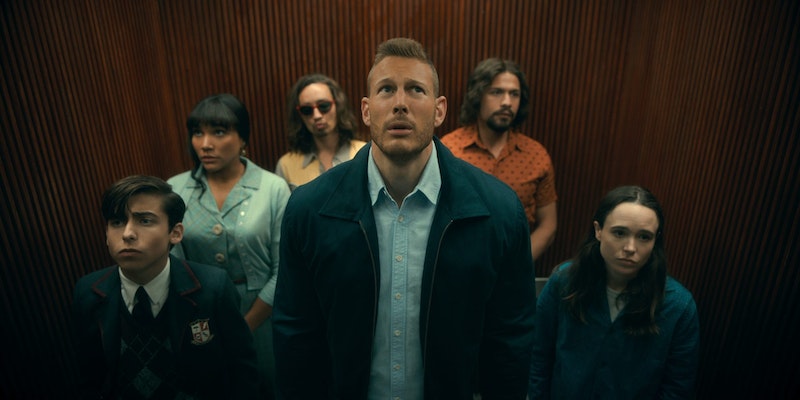 In modern television, shows based on comic books have seats at the table. Daredevil delivered a crime thriller in Hell’s Kitchen, The Boys gave a look into the frightening implications of real-life super-humans, Watchmen examined the social implications and hysteria caused by the actions of masked heroes, and The Walking Dead continues to command large viewership even in its 10th season.

These shows deserve acclaim. They’ve taken stories of people in masks fighting crime and transformed them into thrillers with character development, side plots, and even some episodes without any crime fighting. They succeed as television shows, and fit into the mold we’ve come to expect.

Steve Blackman had other ideas. Blackman was appointed showrunner for the Netflix adaptation of The Umbrella Academy, based on the comic book series of the same name, written by Gerard Way (of My Chemical Romance) and illustrated by Gabriel Bá. Instead of taking the gothic style series and dovetailing it into a commentary, Blackman went the other direction. He made it feel like watching a comic book rather than watching an adaptation of one.

The Umbrella Academy revolves around a group of children, all of whom have special abilities. They’re born to mothers who were never pregnant, and scooped up by an eccentric billionaire, who raises and trains them at the titular academy, located in a city known only as “The City.” Blackman keeps a lot of Way and Bá’s ideas intact. The characters are all the same and the plot is similar, but so are the flaws of the comic.

Season 1 follows the Academy as they’re brought back together by their father’s death. At the same time, coincidentally, the youngest of the academy (known as “Five”) returns from the future, reluctantly becoming a time-travelling assassin in order to get back home. The Academy must band together in the wake of their father’s passing to stop an impending apocalypse, which Five (Aidan Gallagher) knows is coming in eight days. He’s frustrated that he’s returned in his 13-year-old body. Is this coherent? Not really. Are explanations eventually provided for these characters’ motivations? No. Is it fun? Absolutely.

Before you can question why this group of assassins wants to ensure the world ends, two of them attack Five in a department store, where he’s gone to collect a mannequin, who was his only companion in the future, and his true love. Five crawls the aisles, refusing to leave the mannequin behind, and dodges waves of automatic gunfire. He tries to attack one of the gunmen, but they’re both wearing large metallic rabbit masks to shield themselves. The absurdity doesn’t disappear. The Umbrella Academy allows the viewer to revel in it.

In the show’s first season alone, after the department store, the two assassins (Mary J. Blige and Cameron Britton) try to kill the entire family at the Academy, where they take Klaus (Robert Sheehan) hostage. He escapes, taking their time travel device with him, and accidentally transports himself to the frontlines of the Vietnam War, where he fights for a year and falls in love. Just before we can question this, the Academy’s only member without powers (Ellen Page) begins to date a very suspicious man, and discovers she has powers of her own.

Instead of building on this world and setting, Blackman follows the second arc of the comics, in which the Academy is scattered throughout Dallas between 1959 and 1963, after a time travel incident gone wrong. The Umbrella Academy throws its characters into a new setting, in a new time period. They struggle to band together to fight. The show teases the viewer with the Academy fighting all together, but things go wrong before they can even get to that point.

Just like comic books from the 1980s or 90s, just before the “gritty reboot” became commonplace, The Umbrella Academy is a wacky story of this superhero team just trying to keep it together long enough to save the world. They once again clash with hitmen while a 1980s pop song plays, and it looks nothing like the brutal fights from the likes of Daredevil.

The second season gives the Academy a de facto headquarters in Dallas, and a sidekick who lives there and supports them. They’re faced with a spy, who Academy member Diego (David Castañeda) falls in love with. A trio of new hitmen pursue them as they try to contact their young father. And all of this revolves around the assassination of JFK.

The disjointed nature of the show can make it frustrating to watch. The characters aren’t as fleshed out as in other shows, and it often relies on humor to sidestep important potholes.

As a television series, The Umbrella Academy has its flaws. As an exercise in adapting a comic book, it succeeds.