Anti-comedy returns to the East Coast to spread a little holiday insanity. 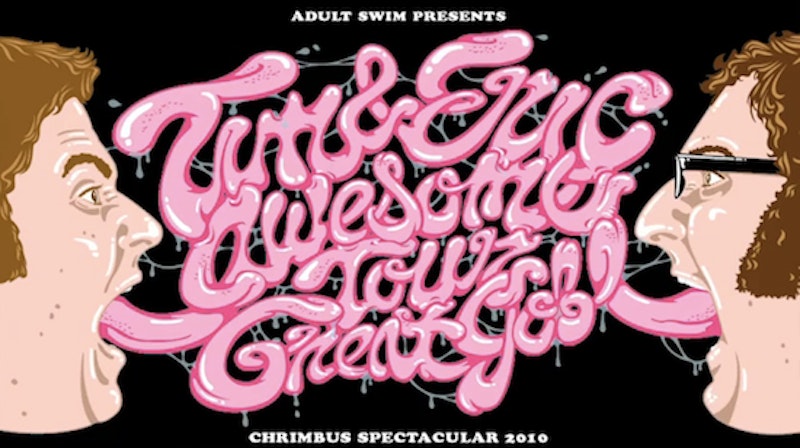 Tim Heidecker and Eric Wareheim’s projects regularly defy any kind of simple description, but let me lend my Herculean lexical prowess to the task: Tim and Eric are fart jokes for the intelligentsia.

I didn’t really know what class of people the Tim & Eric audience consisted of before last weekend, aside from the very small club of my girlfriend and myself. Despite being adamantly anti-laugh track and violently repulsed by catch phrases as an excuse for comedy, we’ll fairly regularly sing each other phrases of hyper-cliché Tim & Eric songs, call each other “dungus” or gleefully as “where’s my chippy?” I’ve even started to call my unruly mess of hair “The Brule.” Tim & Eric burrow into the uncomfortable core of what makes media appealing and addictive and forces the worst, most garish and pandering parts of this out into the harsh daylight for us to watch shrivel and desiccate.

You’re either comfortable with yourself enough to watch a commercial about bowel-irritating, sleep-promoting apples, or you’re not. Awesome Show is regularly the most controversial television show on a block that boasts Family Guy and Aqua Teen Hunger Force, with people usually either praising them as gods or rallying for Tim & Eric’s death and/or dismemberment. After the fifth and final season of Tim & Eric Awesome Show! Great Job ended, I had to go and see them in NYC, during a rare trip that hit the East coast for a few shows.

The line for the Times Square Best Buy Theater wrapped halfway around the block, and each time we’d thought we’d finally found the end of it, we were directed around another impenetrable section of clusterfuck Black Saturday shoppers. If there’s a singular idiotic weekend to venture into Times Square, it’s right after Thanksgiving, and we were at the sweaty core of it. The line wasn’t too difficult to follow, since the trail of ironic beards, turtlenecks and black-rimmed glasses was easy to spot through the shopping bags. The word of the weekend was “irony.” Watching gargantuan, pseudo-viral ads broadcast across buildings while waiting on line for a show that decried these things fit into that theme.

An older, yuppie couple sat down next to us in the sit-anywhere-you-want venue and asked us why people were standing. “Will there be dancing at this comedy play?” they inquired.

I didn’t want to spoil the surprise, so we said that we didn’t really know what to expect, which wasn’t an explicit lie. We spent the next 20 minutes conjecturing on what kind of people buy tickets to a show without Googling what they hell they were going to, and delighted that we were going to get a meta-show by watching this couple as well, who were almost guaranteed to not crack a single smile. I prayed that someone would come out wearing the Giant Testicle Suit. (My prayers would later be answered 10-fold when the fabled suit emerged, with an added Giant Penis to complete the ensemble. Yuppie woman covered half of her face in humiliation.)

The Chrimbus Spectacular opens with anti-comedian Neil Hamburger, a man who you either love or hate, but employs the same comedic mechanics as Tim & Eric. Every joke predicates on a pathetic celebrity reference, and the hacking, coughing setup is often funnier than the punchline itself. His venomous attacks on the audience are some of the most tangential, vitriolic things since Tony Clifton, or Michael Richards. In fact, it’s pretty much the exact same shtick as Clifton, but somehow, Hamburger keeps it entertaining. The references are obvious, and operate as a pretty successful bridge between the familiar Andy Kaufman and the world of Tim & Eric.

Much of Tim & Eric depends upon the strange conventions of video production (and the failures thereof), making the translation to a live show unpredictable. When Tim’s microphone failed to get a signal during the first musical number, forcing him to grab a stage mic and preventing him from doing certain choreographed dance moves, it was impossible to tell if this was an expected element or not. This freedom to fail is an unexpectedly liberating experience for the audience as well as the performers.

Embracing the line flubs and stumbles instead of allowing these things to evoke an awkward sympathy for the performer made the entire experience one of the most enjoyable live performances I’ve ever seen, though this is mostly because I’m a spaz who is constantly fretting about the performers hitting their marks and hoping that they sleep well at night.
Prolonged video segments divide the few live bits.

Tim & Eric as hilariously homoerotic Siegfried & Roy-type holiday performers, as obnoxious MTV VJ parodies Jim & Derrick, as space enthusiasts H. Donna Gust and Jimes Tooper, as Blues Brothers 2012, and finally, a 30-minute musical performance as the bluesy (and surprisingly, musically sound) rock band Pusswhip Banggang, interpreting classic songs from the TV show where all of this originated. While the live performances are exceptionally observant, the video segments are the most gloriously grotesque and enjoyable parts of the show.

So, why go out and see it all live if the videos are the highlights of the show? Maybe it’s the irony that made it enjoyable. As pot smoke wafted through the theater, it’s impossible to avoid the assertion that Tim & Eric is often called “comedy for stoners,” though I’ve never used any drugs to enhance my enjoyment of the show (or in my personal life, for that matter). There were at least two points in the show in which Tim & Eric make it very obvious that the pothead audience really isn’t the group they’re going for, but that was lost on the audience. Instead, their depictions of potheads as unfunny idiots only seemed to remind people to bust out the baggie that they’d hidden in their shoe.

The irony finally collapsed on itself as we walked back to Grand Central behind a trio of Look At These Fucking Hipsters, linked arm-in-arm and literally skipping towards the station in some kind of uber-hip tri-sexual tryst, one guy wearing a headband he’d obviously either stolen from someone’s grandmother or made from her couch, restraining his carefully tousled, thinning hair. For a little while, I felt like I was among my people, calling out “Ooh ma ma!” as a kind of Marco Polo as we filtered out of the show, but the reality that there is no subculture that is worth designating myself a part of finally hit home. This is something you can’t grasp while watching this on TV. Who would have thought that a comedy show would be so sobering?