The Technology of Fierceness 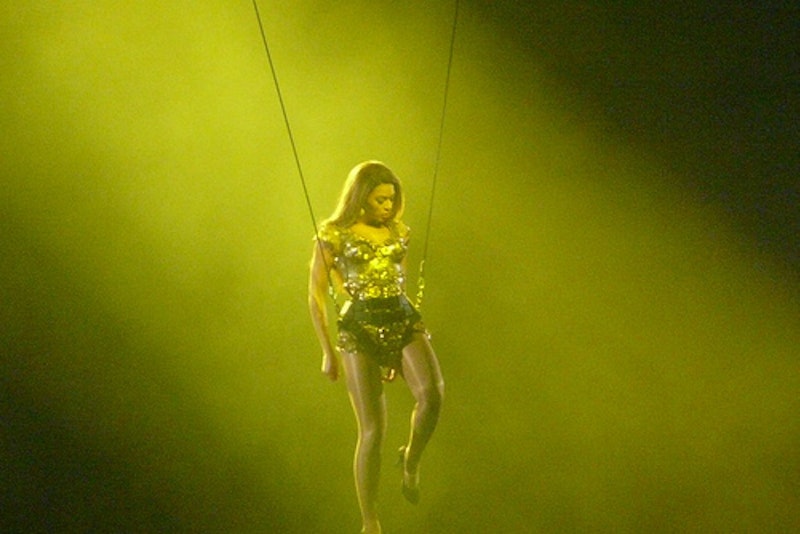 What is heat? Most of us would say that heat is exciting and dangerous, and that’s why we use it to describe the sting of attraction. A hot guy, a hot girl. A hot mess. Pop sensation Beyoncé has always worked “heat” to the fullest. But how hot does Beyoncé get? Just last month, Bey launched Heat, her first foray into the celebrity fragrance industry. It sold over 72,000 units in the first hour, and $3 million worth to date. That’s a lot of freakin’ perfume! But of all the possible names for your own scent, why go with Heat?

The advertisement for Heat has the answer. Just look at it. Boy is it hot in there. Beyoncé wears a silky, loosely fitted fire engine red dress. Her hair is lightly teased and stringy – the result of all that humidity!—and the redness of the dress punctuates her orange and yellow eye shadow. She’s sweltering, burning up in the image and turning the image itself into a spectacle of heat and sexuality. Catch the Fever.

But you know what? “Heat” has actually always been Beyoncé’s favorite element for one reason or another, and more than that, “heat” has historically been attached to black female sexuality. Scholars like Jason King have shown that there is a special relationship between black female sex appeal and heat. Heat is basically the special quality that black female performers bring to the stage.

Beyoncé has consistently based her image on the language of “heat.” In her 2003 video for “Baby Boy,” Beyoncé’s Creole body writhes and glistens with sweat to the Arabian/Caribbean beat of the song as she lay atop a fur rug, all while covered in fabulous diamonds that basically sweat shine. In 2005 she performed “Proud Mary” at the Kennedy Center Honors celebration of Tina Turner, and she wore a dress that was basically a flame of fire. In 2006, the theme of sweat continued in the video for “Déjà vu.” Set in scorching hot Louisiana, the video opens with a strong beat, but what you notice first is the close-up of Beyoncé’s back that’s dripping with beads of sweat.

Why is Beyoncé always so damn hot? If you know Bey, you know that this is one diva who does not make mistakes. Every move she makes is precise, calculated. And in the studied way she channels other fabulous red-hot divas—Josephine Baker, Tina Turner, Diana Ross and, even Dorothy Dandridge, we see that Beyoncé knowingly and happily plays up the sexiness of the black female “jezebel” in her performances. The “jezebel” is the stereotypical mixed race seductress whose main role is to seduce white men. Basically, Beyoncé plays into the history of the black women’s body as a site of heat, sultriness, and bootylicious—her own word—solidifying herself as a gifted singer but also as a major sex symbol.

But the story doesn’t end there, because left un-heated, all hot objects cool off eventually. And just as much as Beyoncé uses the language of heat and sweat to emphasize her sex appeal, her use of wind is not that far behind. By the end of the video for “Crazy in Love,” Beyoncé flocks to a giant industrial wind machine just before she and her dancers bust a move. Beyoncé fanatics already know that the diva never performs live without somebody’s wind machine. You might say—hey—wind makes it easy to sing and dance under those white-hot stage lights. But is that all?

According to the Oxford English Dictionary, wind is literally “Air in motion; a state of movement in the air.” You already know this—wind is a powerful, destructive force. It knocks down trees and power lines. It’ll blow you away. But there is another way to think about wind as something more than just air. Beyond air in motion, the OED also defines wind as “vain imagination or conceit.” The way I see it, when used in a glamorous performance, wind adds fabulous drama to a picture. You could even say that the wind creates the picture, blowing it off of the page and into excitement.

Wind is often used in high fashion photo shoots, for instance, to add drama and movement to the final picture. Wind used in vain brings drama and excitement to a glamorous performance. I like to think of wind as a “technology of fierceness”—a technology that along with fabulous make up, fabulous hair, and fabulous clothes, pumps up the volume, electrifies the frame, and adds a sharp attitude to a still shot. Technologies of fierceness create the final image.

How does Beyoncé use the natural element of wind in her live performances? The tune with the most wind is probably “Crazy In Love.” Every time I’ve seen Beyoncé do a live performance of that song, she freaks out to the wind. Then, out of nowhere, the energy on stage is blown way up. The wind machine is on full blast, and Beyoncé fights the force of the wind that blows her hair all over the place.

Normally, wind has the power to blow you away, to knock you down. But Beyoncé totally works the wind. Think, for a minute, that wind is a mysterious element because you can’t see it. It’s everywhere, but you can’t touch it. Tell me what’s more untouchable than a diva. Fabulous wind is a technology of fierceness that gives Beyoncé not necessarily sensuality, but fearless attitude. Not only sex appeal, but fierceness. Heat and sweat might make you sultry. But wind will make you a diva.