So why even bother? 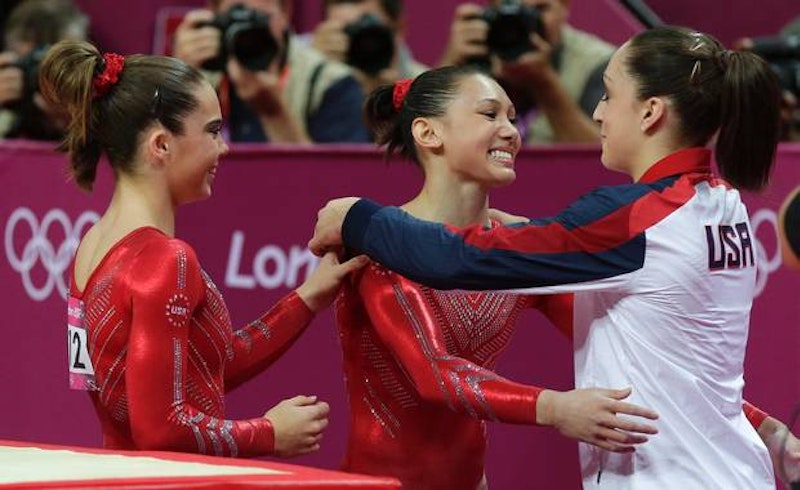 With four years separating summer Olympiads, it’s easy to forget the traditions that rankle until you’re right back in the thick of things, driving safety pins through your Michael Phelps voodoo doll while haphazardly fast-forwarding through DVR’d blocks of breathless NBC coverage. Things like: reporters shoving microphones into the faces of athletes immediately after they’ve completed routines or sprints; commentators narrating events seemingly near or slightly beyond the verge of sexual climax; painfully voyeuristic extreme close-ups of gold-medaling athletes the parts of medal ceremonies where national anthems are played; Bob Costas in general.

All of that stuff should bother me more than the U.S. team gymnastic tradition wherein lady gymnasts queue up to hug a fellow lady gymnast who’s just completed a routine, and yet it doesn’t, mostly because of how fake these hugs are. I mean, sure, it’s sportsmanship, and the hugs are pro forma whether the athlete bottomed out or achieved a podium score. But the hugs are loose and insincere in the same sense that air kisses between fashionistas and society women are loose and insincere, which begs a question: why even bother to hug at all? Why not just go with a high five or a fist bump or an “atta girl” or a shoulder punch or something?

The effort and energy these fake hugs require may seem minor, but this isn’t little-league softball. This is big-time, world-stage gymnastics, where focus and form are paramount and victory comes down to the tiniest little details. Preparing for and executing a fake hug demands a series of physical and mental decisions that must be reenacted time and time again and have the effect of redoubling the impression—already re-enforced by affects, severe features, musculatures, and the clipped, exaggerated nature of some performances—that these gymnasts are robotic New World Order–esque test-tube mutants. Come on, ladies: y’all know each other inside and out. You train together and cry together and ache together. Humanize this sport. Seriously, would it kill McKayla Maroney to give Gabrielle Douglas a noogie after a vicious run on the uneven bars?