Not surprisingly, the Mayan-inspired mania surrounded 12/21/12 is more money-grubbing than actual science. 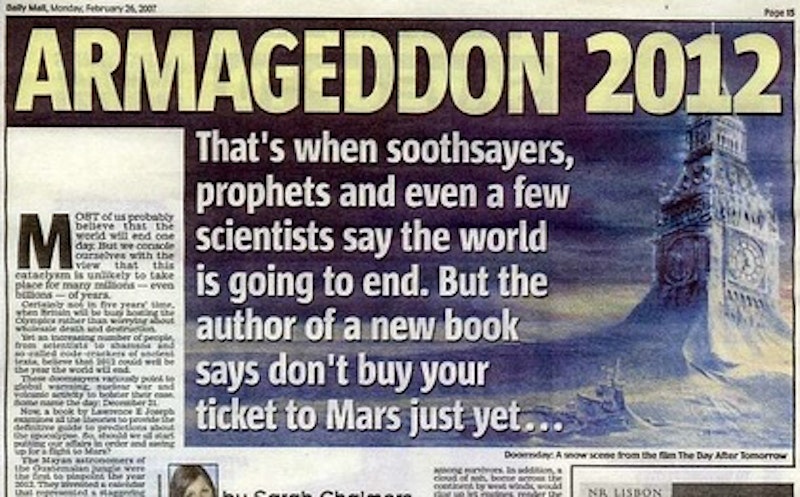 From the UK's Daily Mail.

If the hundreds of millions of Google searches related to “2012” are any indication, the apocalyptic predictions and mystery surrounding the date December 21, 2012 have captured public interest and created a legitimate culture of fear. Now Roland Emmerich, the brains behind doomsday blockbusters like Independence Day and The Day After Tomorrow, is working on a new film titled 2012, a $200 million project based on—you guessed it—the end of the world. Set to open in July, this latest eco-disaster flick will underscore the increasing presence of 12/21/12, the supposed “end date” of the Mayan calendar, in contemporary media. In the midst of all the cataclysmic depictions in books and films, one is left feeling an anxious uncertainty. What is fact and what is fiction? Where did this latest end-of-the-world date come from? What is the B.F.D. about a date just three years away?

Such curiosity led me to purchase The Mystery of 2012: Predictions, Prophecies & Possibilities (2007) when I came across it in a downtown Manhattan Barnes & Noble. The book is a compilation of essays authored by people who don’t necessarily endorse the idea that the world will meet an earth-quaking, volcano-erupting, asteroid-colliding, polar-shifting end on December 21, 2012; but rather that humanity is on the brink of a great and much-needed paradigm shift in “consciousness.” Offering their own perspectives, a variety of leading New Age authors provide much more optimistic though similarly bizarre predictions for 2012 and the speculated future of humanity. While many essays are predictably rife with spacey New Age lingo and present some very hard-to-grasp “meta” ideas evocative of the documentary What the Bleep Do We Know!? (2004), contributors like Gregg Braden and Robert K. Sitler are successful at explaining the fascinating complexities of the Mayan calendar—the origin of the 2012 prophecy.

The most important thing to know about the remarkable time-tracking system known as the Mesoamerican Long Count Calendar, is that nowhere amongst the glyphs does it say “the world will end via (insert preferred natural disaster here) on 12/21/12.” The Maya were amazingly skilled at tracking cycles in nature, and their calendar, which most experts believe started at a date that correlates with 3114 BC, reflects these cycles in an astonishingly harmonious way.

As you may have learned in astronomy class or in the beginning of the documentary Zeitgeist, the Movie (2007), there’s evidence showing that ancient peoples had knowledge of Earth’s “wobble” movement known as precession. Since one full 360-degree cycle of precession takes approximately 26,000 years to complete and just one degree of “wobble” takes approximately 72 years to notice with the naked eye, it is truly remarkable the ancients were capable of even realizing the occurrence of this movement given their short life spans and limited technology.

To record the long periods of time associated with precession, the Mayans specified several durations of days, the longest being 144,000 days called a Baktun. As Braden and Sitler explain, the first Baktun began in 3114 BC, the 13th Baktun, which we are currently in, will end on the winter solstice of 2012. What makes the ending of this Baktun different from the others is that the calendar seems to either end or restart at this point, although some evidence exists suggesting the Mayans recognized “distant dates” beyond the 13th Baktun. Concurrently, in the precessional cycle, Earth’s axis is gradually moving away from pointing towards the constellation Pisces, which it won’t do again for 26,000 years, and towards the constellation Aquarius. (Hence the annoying lyric, “This is the dawning of the Age of Aquarius…”). Since the movement into the sign is so gradual, it’s hard to realistically specify the end of one and the beginning of another, but New Age extremists seem to feel 12/21/12 is the sudden start of the Aquarian Age and the moment at which humans will experience some sort of spiritual awakening.

Taking matters to a new level, New Age leaders such as Jose Arguelles, Daniel Pinchbeck and John Major Jenkins, who contributed essays to The Mystery of 2012, have fused beliefs from Mayan mythology and pseudoscience to falsely conclude that the ecliptic of our solar system will align with the center of the Milky Way Galaxy on 12/21/12. This is just one of several ideas associated with Mayanism, a loosely defined belief system that, in its most far-fetched forms, links the ancient Maya with crystal skulls, the lost continent of Atlantis and extraterrestrial life. Though Mayanism, which has heavily influenced aspects of the New Age movement, seems to offer a generally optimistic, uplifting outlook for 2012 compared to pop culture’s increasingly ubiquitous doomsday scenarios, the promise of “new dimensions of being” on an exact date three years away seems like an equally outlandish concept to accept as plausible.

While ancient astronaut theories and other components of Mayanism provide grounds for great sci-fi, they are leading to many widespread misconceptions and unfortunate cinematic experiences like Indiana Jones: Kingdom of the Crystal Skull (2008), in which an ancient Harrison Ford journeys to an even more ancient Mayan temple to reunite extraterrestrial skulls with supernatural powers. In reality, the crystal skulls allegedly unearthed at several Central American locations were ruled a hoax by the Smithsonian and other archaeological organizations who found they were manufactured in the 20th century.

As theorists and extremist subgroups of the New Age movement continue to speculate about our future and 2012 disaster flicks continue to make Hollywood rich, all facts seem to show 12/21/12 will have the same fate as the dreaded Y2K. Unsurprisingly, 2012 fever is being fueled simply by want of money and/or fame and is leading to a viral spread of unauthentic information. While it’s easy to see why the highly sophisticated astronomical knowledge coupled with the mysteriously sudden appearance and disappearance of their civilization is so captivating, all we can truthfully conclude about the ancient Maya is that they were extremely skilled at tracking time. Moreover, all we truly know about what will go down on the winter solstice of 2012 is embodied by the symbol inscribed on the Mystery of 2012’s title page: a big grey question mark.