The Golden Days of the Zeppelin

Zeppelin travel was a combination of an ocean cruise and a luxury hotel. 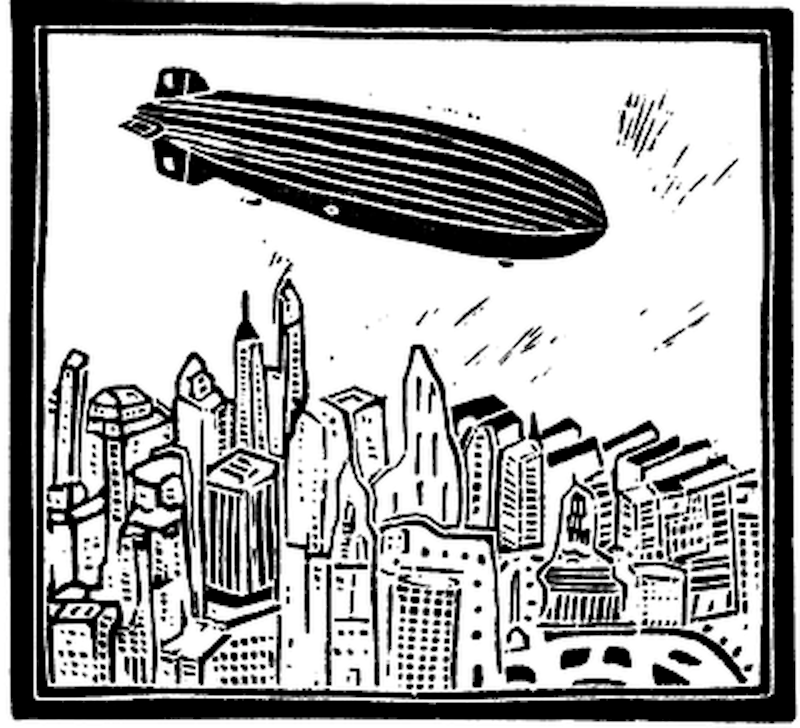 Zeppelins were the first means of commercial air travel. A Zeppelin was a rigid airship developed by the German Count Ferdinand Von Zeppelin in the late 1800s. The vessel had a light alloy skeleton surrounding hydrogen-gas filled balloons known as "gas bags." It was powered by an internal combustion engine and guided by complex navigational "fins." The bottom of the structural frame held a compartment for passengers, crew and storage.

The Zeppelin was first flown commercially in 1910 by the German company Delag. By 1914, Zeppelins flew more than 1500 flights and carried 34,000 passengers. Early Zeppelins reached 400 feet in length and could travel 50 miles per hour.

At the start of World War I, Germany decided to use Zeppelins for reconnaissance and bombing missions. By 1915, Germany began Zeppelin bombing raids over England. They targeted military sites but errant bombs landed on homes and occupied buildings. Between 1915 and 1916, Zeppelin raids on England killed 474 people and wounded 1416. The civilian deaths had little military impact but the presence of huge, bomb-dropping dirigibles over the city struck fear in all Londoners.

Zeppelins had one fatal flaw. Because they were filled with hydrogen gas, they were flammable. As the war progressed, London installed new searchlights and high-caliber anti-aircraft guns. They also developed incendiary bullets that could ignite the hydrogen gas. By 1917, the British became proficient at downing Zeppelins. German crewmen caught in burning airships had to choose between being burned alive or leaping to their deaths. Germany finally halted the Zeppelin raids in 1918.

The Treaty of Versailles ending World War I required Germany to surrender their Zeppelins as reparations to the Allies. Many German crews destroyed their vessels instead of handing them over.

The Golden Age of Zeppelins was 1928-1937. Zeppelin travel was a combination of an ocean cruise and a luxury hotel. Travelers boarded the ship via a gangplank at a large airport hangar. Upon entering the ship, passengers had to relinquish all matches and cigarette lighters. Smoking was only allowed in a heavily fortified smoking saloon that provided cigarettes and lighters.

Passengers had their own cabins with a bed, a makeup table and a washbasin with hot and cold water. Separate Men’s and Ladies' bathrooms were found at the end of the hall. The rooms had central heating and ventilation. An air steward could be summoned by ringing a bell. Passengers left their shoes outside their cabins and they'd be polished by morning.

Zeppelins had a spacious dining room which served three meals a day plus afternoon tea. There was also a reading/writing room, a drawing room, a smoking saloon that doubled as a cocktail bar, a gift shop and an observation platform with large windows (which partially opened) allowing for camera shots of the scenery below.

There were three rules of Zeppelin travel. 1) Do not throw anything overboard as it could damage the hull or airship propellers. 2) Do not carry matches or lighters. 3) Do not leave the passenger quarters unless accompanied by crew. A typical Zeppelin transported 70 passengers and 50 crewmembers. Passengers were allowed to bring 66 lbs. of luggage. Travel time from Germany to the United States took two and a half days. Air travel was smooth and largely without turbulence.

When the Third Reich came to power in 1933, Dr. Eckener refused to cooperate with the Nazis. German Air Minister Herman Goering took over Zeppelin flight operations. The vessels were painted with swastikas on their fins and they flew low over Germany broadcasting music and propaganda speeches.

In 1936, Germany introduced the Hindenburg, the largest Zeppelin ever built. The ship had 15 hydrogen gasbags, an upper deck for passengers and a lower deck for crew. It spanned 803 feet and could fly at 85 mph. The Germans intended to fill the Hindenburg with non-flammable helium gas but due to a helium shortage the vessel was filled with hydrogen. The Hindenburg made 17 trips across the Atlantic in 1936. One of these trips transported boxer Max Schmelling back to Germany after he knocked out Joe Louis at Yankee Stadium. The cost for one-way passage from New York to Germany was $400.

In May 1937, the Hindenburg left Frankfurt for Lakehurst, New Jersey. The flight proceeded routinely and three days later it was cleared for final approach to Lakehurst Naval Station. Four minutes after ground handlers grabbed hold of the ship's landing ropes, the Hindenburg burst into flames. In just 37 seconds, the ship became an inferno and crashed to the ground. Of the 97 people on board, 35 were killed. Film cameras captured every moment. The source of the fire was never determined but the disaster effectively ended the age of the Zeppelin.