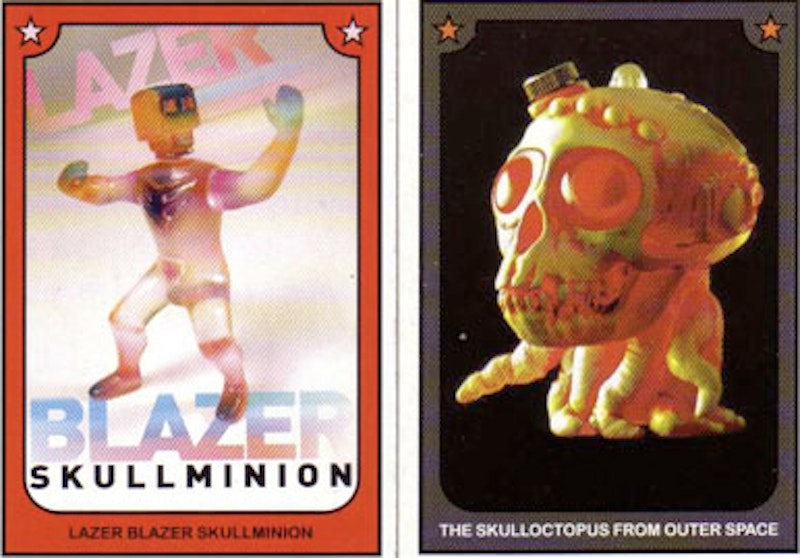 Anyone who was born before 1980 will immediately be transported in time by the gritty, waxy feel of a vintage trading card between their fingers—blurry halftone dots, extra cardboard threads, and an irrepressible desire to shove them between bicycle spokes. Sure, they’re nothing like the super-glossy, finely detailed, mega-slick paper stock that we get today, but we sacrifice a lot of things for the love of modernity. Trading cards may be getting classier, but they lack the soul of getting your hands dirty. Run your hands over your old Bo Derek trading card set and you’ll see what I mean, or even the bizarre gunpowder-scented Punisher trading cards of yore.

This is the first thing that’s awesome about The Art Hustle, a recently released set of trading cards from SideKick Media & The Cardhacks. The Art Hustle chronicles the personalities behind the “lowbrow” art scene—an aesthetic movement that merges fine art, the best aspects of pop culture and illustration with a whole mess of surrealist id. The signature “lowbrow” desire to hang onto childhood characters and relics is reflected in the old school materials of these trading cards, as well as the wax packs they are glued into. Yes, with sticks of gum. I bet the gum tastes like Mega Man and skulls and running off the bus after school.

The set of 162 basic cards is populated with portraits and artworks from the most prominent and creative figures within this scene, some of who even opt to use their real names over their “street” names. These include The Sucklord, Bob Conge, Monstrehero, Frank Kozik, Aya Kakeda, Gargamel, Snaggs, Chris Ryniak, Shawn Smith, Tara McPherson, Ron English, and a fair mix of other amazing artists—as well as a good portion of creators who just seem to know the right people. I’m not spitting out any names, but the range of visual awesomeness spans from the incredible to the high school hallway. The set reveals everything that’s excellent about the genre, and places it alongside everything that is wrong with it. It’s the innovative and skillful versus the arrested and repetitive, and the transcendent artist versus the regurgitative trend followers.

If anything, the title of this set of cards reveals the nature of the business: while a portion of art success is about skill, a great deal relies on the hustle, the coincidence, business acumen, and connections. Some of the more mediocre inclusions in this set serve as evidence of this. Fortunately, they’re kept to a minimum, as there are far too many “artists” who choose to capitalize on painting really big eyes, spirals, ultra-cute characters and things that have been stitched together instead of venturing into any kind of visually intellectual territory. The pop surrealist genre is home to the best and worst possible works of art because it presents itself so accessibly.

Mixed in with the artist profiles and artworks are cards which are unique hand-drawn artworks, signatures, error cards, and a few off-the-wall cards which don’t really fit anyplace at all in the set—all ideas that borrow respectfully from the collector culture and forced value that has overtaken most modern trading card collecting, which has placed the quest for rare and special cards over the actual content of the main set. Regardless of the places where art and consumer culture intersect, it’s still pretty awesome to score an original piece of trading card art from someone vital to “the scene” without having to go anywhere near the nauseating gallery opening parties which Juxtapoz magazine so proudly destroys their back pages with.

I’m sure there’s a certain amount of hypocrisy in being anti-hipster while collecting expressly retro trading cards, but you also can’t argue with the inherent appeal of a trading card called “Brain Magical Vagina,” depicting a sculpture, which looks exactly like it sounds. “Lazer Blazer Skullminion” and “Skulloctopus are equally awesome.

In their own strange way, The Art Hustle cards are art objects as much as any of the art reproduced on them is, simply because of the mental spaces where art and product intersect within the lowbrow world. They’re not all winners, but the good among them is worth the investment.