Lessons from the road. 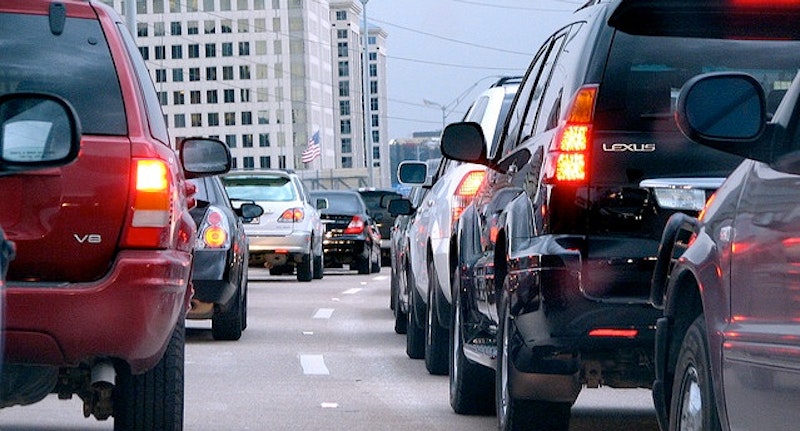 As anyone with a couple years’ driving experience can tell you, bad motorists are everywhere. In Pennsylvania, they’re pokey, putzing along, pecking desperately at smart phones. In Delaware, they’re unashamedly reckless. In New Jersey, they’re openly antagonistic. In recent months, no trip to Maryland to visit my parents has been complete without being part of the backdrop for a Fast and the Furious-style, weaving-in-and-out-traffic motorcycle/sideshow car chase or narrowly avoiding impact with a narcoleptic/drunkard fishtailing in a tank-sized Lincoln.

Driving in Texas, I’ve found, is different. Sure, drivers here don’t pay enough attention to the road, pay too much attention to their handheld devices and static from their passenger-side chattel, coast anemically along far below the posted speed, drift unconsciously into parallel lanes of traffic, race to red lights, mercilessly bully those going the legal limit, and so forth. Yet there’s something else there that you won‘t find anywhere else: a Texas-sized, “everything’s bigger” arrogance. An innate cockiness.

Texans, to a fault, seem to possess a passive-aggressive approach to cutting other drivers off. I’m not talking about the traditional “screw you” cut-off, where one driver running alongside another quickly flicks the turn signal switch and darts in front of the other driver, then accelerates or slows stubbornly down; that’s a common enough practice, and most readers are probably all too familiar with it.

When a Texan decides to cut you off, there is no forewarning, no preamble, no stalking of prey prior to a pounce. No turn signal. (For reasons that elude me, Texas vehicles are sold sans turn signals.) It just happens, out of nowhere. All of a sudden a massive Ford pick-up truck is moseying casually into your field of vision and forcing you to swerve or slam on the breaks if it hasn’t already crushed the front half of your car like an aluminum can. (A corollary for those who live or have lived in Baltimore’s Mount Washington/Pikesville diaspora might be queuing up to pay for groceries at the Shoppers Food Warehouse only to have someone artfully and definitively steal the next spot in line before you can claim it.) It doesn’t matter whether you’re on a highway or a glorified avenue; drive a few miles in Round Rock, Texas at any time of the day or night, and this will happen to you at least twice. Honking in protest will earn you puzzled expressions that are only half expressions, really, because everyone here wears enormous bug-eye-like sunglasses.

Here’s the scary thing: before too long, your own driving habits will be exactly the same.