But does anyone still care about Spider Man: The Musical? 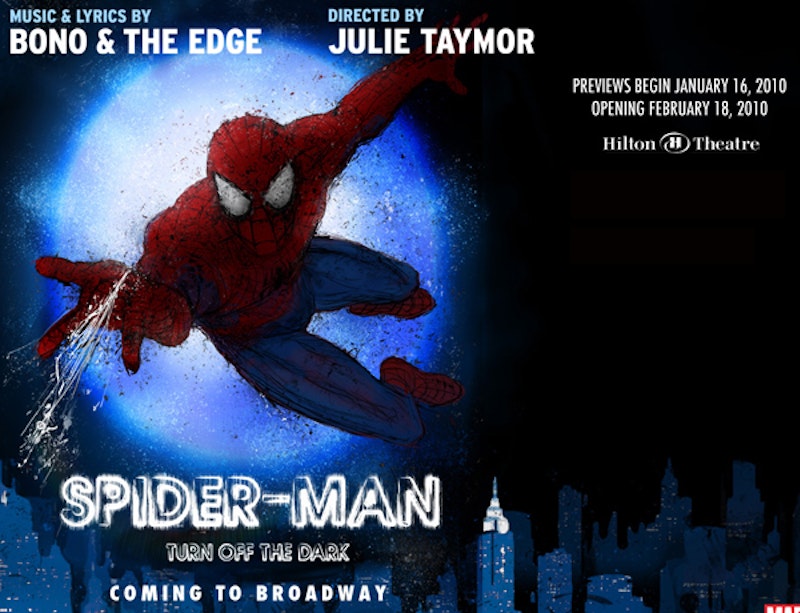 Can you feel it? That palpable sense in the air, that giddy, burbling, I’m-so-excited-I-can’t-concentrate-on-anything-else rush that came with yesterday’s announcement that Spider-Man is finally scheduled to open on Broadway this December 21?

Whaddaya mean, “No”? What if I throw in the fact that the music’s by Bono and The Edge? That it’s directed by Julie Taymor (who did Broadway’s The Lion King and that Across the Universe movie, among other things)?

Still “No”? What if I tell you the cast is headed by Reeve Carney (of the band Carney!) as Peter Parker/Spider-Man, Jennifer Damiano as Mary Jane Watson, and Patrick Page as Norman Osborn/The Green Goblin? Or that they’ve invented a whole new villain with the truly malevolent name Swiss Miss?

Hmmm. On second thought, maybe you’re right. (Wait, I forgot to mention that the show’s full title is Spider-Man: Turn Off the Dark! No, you’re definitely right.)

Scheduled to open just in time for the holidays (after its original February opening was postponed when its producer suddenly found himself $25 million in the red), Spidey’s path to Broadway—at a cost of some $52 million, according to the New York Post—has been, to mix metaphors, snake-bitten.

A Spider-Man musical has been in the works ever since Tobey Maguire first swung to box office glory back in 2002. But while other movie-to-stage adaptations, from The Producers and Hairspray to Saturday Night Fever, Legally Blonde, and even Xanadu came and went, the spider’s egg remained tough to crack.

The real question remaining with Turn Off the Dark—besides, of course, who’s responsible for that awful subtitle—is a simple one: Who’s supposed to care? After Spidey’s last film sputtered at the box office (though I hope someday to “sputter” to $890.9 million worldwide myself), studio Sony Pictures decided what was really needed was a “reboot,” which should hit screens in 2012. That should leave enough breathing room to forget Topher Grace’s Venom, but in the meantime the Spider-Man faithful will have this all-singing, all-dancing version to contend with.

I’m guessing that the hardcore comix crowd will skip it entirely, and casual fans who’ve waited until the DVDs to check out the webbed wonder’s movie adventures probably won’t be ponying up Broadway-size bucks for tickets either. That leaves two types of customers: Those who have to see everything that plays Broadway, regardless of subject matter, and the same core group that kept hoping, year after year, that Hollywood would get the masked marvel right.

That last is a potentially sizeable bunch, but there are few harder things to overcome in the entertainment biz than a stage production arriving with the stench of failure already attached. The original Xanadu, Can’t Stop the Music, and The Room movies can succeed as after-the-fact, kitschy cult favorites, but it doesn’t work that way for live theater.

The thunderous lack of attention paid to yesterday’s announcement doesn’t bode well either, leaving one to wonder if a better subtitle for the Spider-Man musical might be Turn Out the Lights.