Clobbering the Life out of Childhood

Frederic Wertham Comes Back From the Grave. 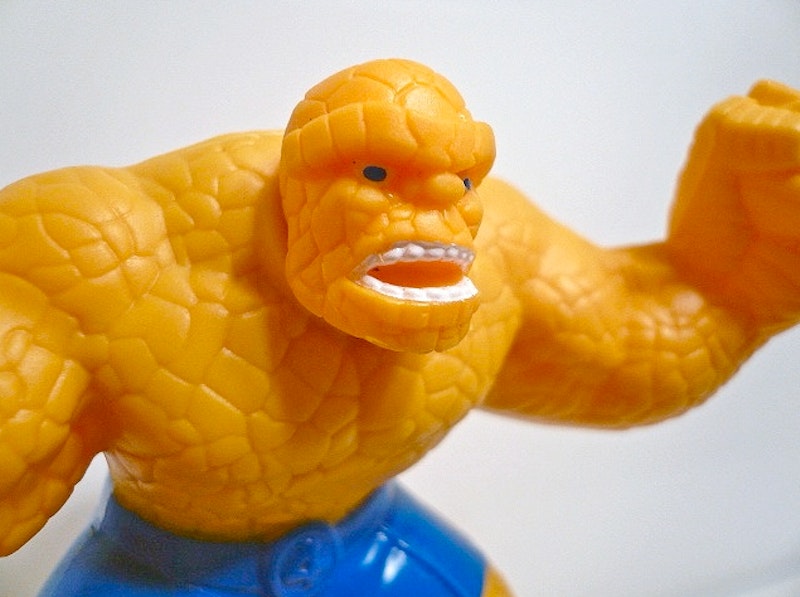 The Campaign for a Commercial-Free Childhood has a problem, but that’s no surprise. It’s just one of hundreds of knee-jerk organizations that give the human pursuit of a purer, simpler, more organic lifestyle a horrible name by completely missing the point.

In a recent posting on its website, the CCFC rails against the ubiquitous and constantly derided McDonald’s—but not for the half-food-half-apocalyptic-sludge they serve. We all know the usual complaint: the food is bad for you, but we’re going to shove it into our faceholes anyway, so our chronic and hilarious obesity epidemic is obviously McDonald’s fault and not our inability to restrain ourselves. You can feign ignorance until your arteries pump solid party cake frosting, but that’s not going to improve much of anything.

No, the CCFC is fighting against Marvel Comics and the inclusion of Happy Meal toys depicting some of their licensed characters. This isn’t because these figures are commercial properties, as one might think from their group’s moniker, but because The Thing (a friendly character who is essentially made of rocks due to an accident in space) declares that “it’s clobberin’ time”—a sentiment that will surely damage the psyches of children far and wide. This is paired with a figure of the Human Torch (a hero who can harmlessly ignite to fight crime, again because of an accident in space), which is a “horrifying spectacle of a man on fire.” The CCFC is upset because they feel that these toys are aimed at children four and under.

Let’s ignore the well-known fact that McDonald’s has always provided an alternate toy for children who fall within this age group—albeit usually branded with forgotten McDonald’s characters like Grimace or The Hamburglar and tragically eschewing crooner Mac Tonite. McDonald’s franchises simply don’t have room in their kitchens for the apple core dolls or stick-and-hoop games that the CCFC would prefer children to play with.

Let’s also ignore the fact that truly concerned parents shouldn’t really be bringing pre-schoolers to McDonald’s in the grand scheme of things. Fast food is choice that we can make, it’s delicious and there should be no guilt in eating the occasional pre-formed and perfectly preserved meat treat. However, if you’re going to get all lathered up over a rock man who enjoys clobbering bad guys, your priorities are clearly misaligned. Go roll your fat baby to some lettuce.

Instead, let’s focus on the misguided idea that every commercial property is evil and will destroy your brain. Here’s the thing: as much as you love your little crotchspawn, not every child is inherently creative and imaginative and full of moon magic spurted forth from unicorn loins, especially if they’re forced to function in a vacuum. It’s our interactions with the world that form the core of our dreams and imaginations. Instead of isolating children from what the material world effusively propagates for anyone who will listen, it’s the responsibility of these parents to teach assimilation skills, and to use existing things as catalysts. The best way to rebel against a throwaway culture is to repurpose it, not ignore it entirely.

It’s a truly lazy parent that will see The Ever-Lovin’ Blue-Eyed Thing and not use him as a teaching tool and provide context for his exhortations. The ideas of heroism, self-control and accepting people despite their differences are all present in the very idea of The Thing. “It’s negotiatin’ time” isn’t a very exciting catchphrase anyhow.

What it comes down to is that the functional parts of our brains haven’t evolved to match the speeds that we can deliver information to each other. The power is in there, but we’re still working on sparking up those parts that understand how to drive like someone who isn’t an asshole. As an individual consumer, we can never hope to control the media to any degree in which we’ll feel totally safe from its influences, so no matter what it brings us, let’s use these properties as tools for growth: accessories to train ourselves to think critically instead of just absorbing.

Therein lies the problem with the CCFC’s complaint. They’re addressing an entity out of their own frustrations at their own poor parenting skills, or unwillingness to support the ways that humanity needs to mentally and spiritually evolve alongside its technologies so that they do not consume us. The fact that they acknowledge how impressionable this age group is, and their negligence when it comes to providing these tools for them, is all you need to know.