Nothing gets your self-absorption flowing quite like sitting for a portrait. 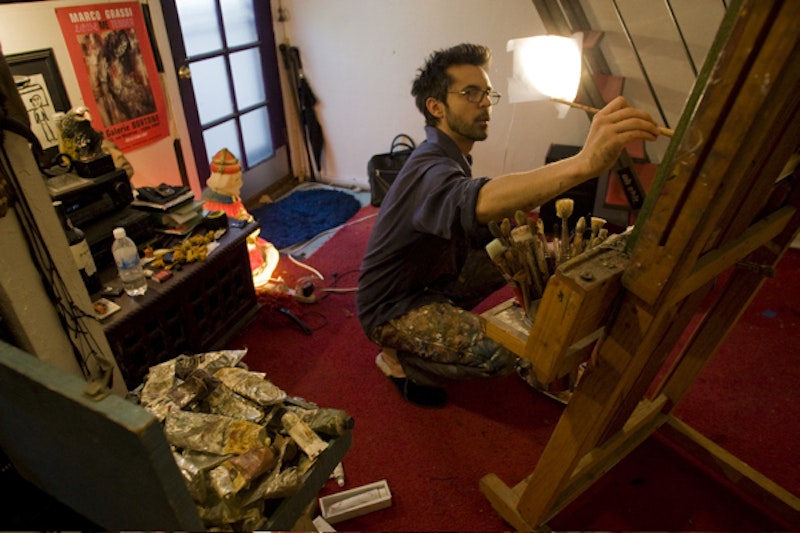 Photos by the author.

If this were a men's magazine, one with lists and tips and centerfolds and unrealistic stories from supposedly experienced men, the advice I have would come near the bottom of a stack of bullet points which, if unstacked and followed precisely, would enable the reader to Live Harder, Pick Up Women, and Be Better Men.

This list would undoubtedly be composed of expensive masculinity: Eat a steak made from walrus meat; heli-ski the northern slope of K2; fend off a school of Amazonian Piranhas—a momentous sequence of to-dos.

If my small adventure were shuffled in among these, you'd be forgiven for overlooking it. But if the goal is to truly be a better man (or woman, for that matter) there is no path more certain than this: commission a painted portrait of yourself.

I guarantee those deep insecurities held over from middle school will be confronted and excised far more directly in front of an artist than in front of a Mako Shark or on top of a glacier. The great challenge for man (and I'm talking Homo sapien man, here) is against himself; challenges against nature, challenges against other beasts—these have been fought (and won) by our far hairier predecessors.

No, the greatest challenges are those in which our own evolutionary prize—our minds—creates the challenge. Crippling self-doubt. Trust. Impatience. These are the guardians to adulthood.

And this is why your portrait must be topless. Perhaps I should have mentioned that earlier. Here's what to expect:

Weeks before you are painted, you will begin to train. This will be like training for a marathon, only motivated by vanity alone. Abs: you'll need them.

You'll agonize over expression, posture, stance. Any wayward look of hunger, fatigue, depression, surprise or haughtiness could be captured permanently in an object you can never throw away.

Soon afterwards, you'll realize that any intention you have to convey hunger, fatigue, or any emotion, any expression at all, depends not on you but on the artist. Plus or minus some measure of ability, what you'll see when the easel is turned around and your portrait is revealed is quite literally the artist's perception of you. What you'll see is how others (or, at least one other) see you.

But first, you'll have to wait (yes, topless), standing, posing for hours. You'll live and die, staring at a burl in the floorboard or a notch in the ceiling, your eyes crossed in the boredom of meditation, your limbs encased in glue while they are painted, then released one-by-one in a momentary search for relaxation as your artist moves across the canvas.

Keep in mind that your portrait will hang with good company—Presidents, Generals, Captains of Industry, attractive women, etc. The one surefire way to fit in is through the clever use of props. Try posing as if you are signing a bill into law or preparing a Falcon for the hunt. I decided to hold a pipe.

Needless to say, this was a bit ridiculous. But, in defense of the pipe, it did insulate me from the burden of seriousness. My silly prop means that I won't be confused with one of those kinds of people, the type who would actually get a portrait painted of themselves. You know. The kind who reads men's magazines.

Portrait by Jeffrey Vincent Parise. Contact him and commission your own portrait at www.jeffparise.com