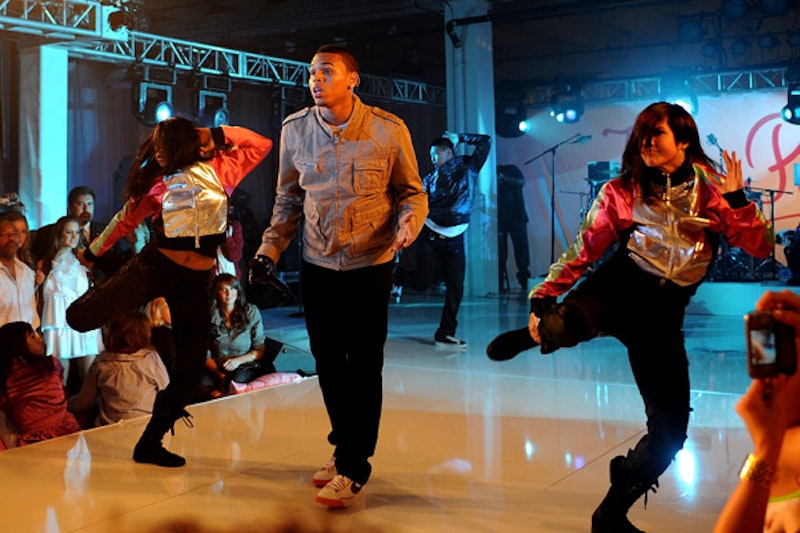 Singer Chris Brown, in New York City to promote his new album F.A.M.E. (Forgiving All My Enemies), began his day at Good Morning America for an interview and performance. Brown—more famous to most people for having beaten former girlfriend Rihanna— had agreed beforehand to address the Rihanna situation with GMA’s Robin Roberts, according to most reports.

Roberts: “What’s going on now is recently the restraining order has been relaxed… Have you all seen each other, been around each other?

Brown: I mean, not really. It’s not really a big deal to me now as far as that situation. I think I’m past that in my life. I think today’s the album day, so that’s what I’m focused on. Everybody go get that album!

Brown then performs “Yeah 3X,” and wafts backstage, refusing to do a scheduled second song in favor of screaming at one of the show’s producers and throwing a chair into a dressing room window, sending shards of glass raining onto the street outside. He then leaves the studio without his shirt—an apparent casualty in the tirade.

Brown tweets: “I’m so over people bringing this past shit up!!! Yet we praise Charlie sheen and other celebs for there bullshit.” [sic]

Roberts tweets: “Sure has been an interesting AM @GMA. Still sorting thru everything myself,” Robin wrote. “Just my 2nd day on twitter, wonder what tomorrow will bring?”

The still-raging Brown, in an effort at calming himself, arrives at a nearby McDonald’s, eager to bring himself under control with the soothing effects of his favorite sandwich.

Counterman: May I help you?

Brown: No thanks, I already had breakfast.

Counterman: No, I mean we don’t start serving from our lunch menu until 11. Would you care to try our new Fruit & Maple Oatmeal? I’m lovin’ it!

Brown: What you told me is in the past! Why do people keep bringing this past shit up? I’ll bet if Charlie Sheen was here, you’d—oh, forget it!

He turns, punches a nearby straw dispenser, and emerges onto the street, now minus his pants.

Brown next decides to make sure that adequate numbers of F.A.M.E. have been stocked at retail stores. He takes a cab to the Tower Records at 4th and Broadway—only to find that Tower has been shuttered since 2006.

Brown: Double-U Tee Eff! How are my legions of fans supposed to pick up F.A.M.E.—which includes the sure-to-be-hit single “Next to You,” featuring Justin Bieber—if record stores can’t be bothered to stay open and sell it?

He exits the cab, now without socks but somehow with shoes, and sprints to a nearby bench, where a shabbily-dressed, homeless man sits huddled over a bottle.

Homeless Person: Well, you did beat her up, didn’t you?

Brown: Man, why do folks always gotta be about the past? This is about the future! My future! Y’all are making it increasingly difficult for me to forgive all my enemies.

Brown: Sorry, man, lost my pants somewhere along the way.

Brown tweets: “Why everyone on my azz about R?!? They don’t still ask Hitler about what he did at Pearl Harbor!!!1! Check out my new album itz got Ludacris on it n stuff.”

Homeless Person: Sure it does. Have you seen the headlines he’s been getting?

Homeless Person: (chuckling softly) No, I ain’t. But believe me, wrecking a dressing room is nowhere near the psychosis that that guy’s experiencing. Now how about we dial down the “me so crazy” act and get back to just pumping your pap-ariffic pop?