"Peter Krause is sitting cross-legged in the backseat of a Yellow Cab, eating a Golden Delicious apple from a clear plastic produce bag in his lap." 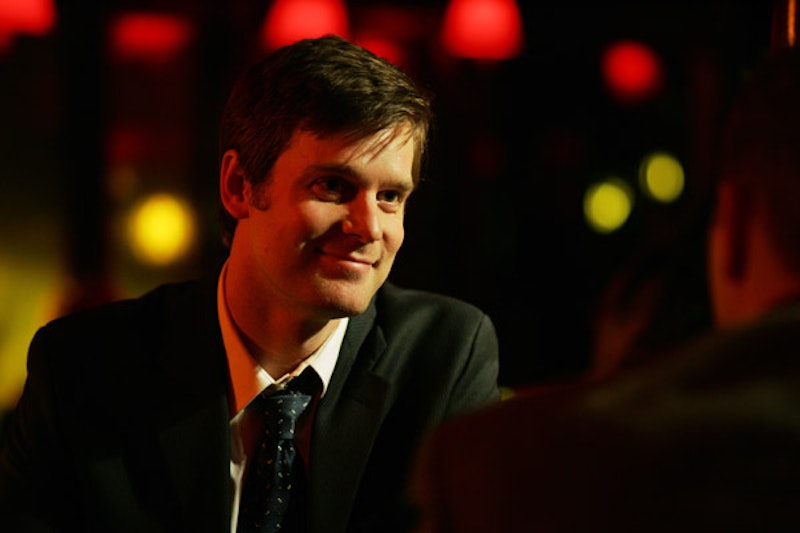 Watching Krause consume an apple is interesting, because while the lower half of his face appears totally committed to the enterprise, the relative rigors, of apple-consumption—the teeth gripping and biting through the green skin and sinking into the off-white flesh, the mouth chewing, horse-like—the upper half of his face seems divorced from the process, eyes never closing or even partially closing and upper cheekbones oddly slack, as if Krause’s thoughts, his very essence, is somewhere other than the back of a Yellow Cab, eating a Golden Delicious apple. After a while, the cab driver’s curiosity gets the better of him, and he wonders, “Sir, excuse me for asking, but are you, like, Peter Krause?” Krause’s jaw drops in surprise, as if he’s not used to being recognized, then the surprise resolves itself into a minor smile, and after allowing the question to hang in mid-air for a moment, he answers: “Sure, why not.”

Krause prefers Abstract Expressionist art to indecipherable gang-tag subway graffiti, unless he is smashed on glue fumes, in which case Krause can take or leave visual mediums.

When interviewers bring up Dirty Sexy Money, Krause cringes inwardly, because for Krause Dirty Sexy Money represents a sort of personal failure, and because his character was the program’s fulcrum, in moments of personal uncertainty Krause wonders whether or not he carried the whole enterprise on his shrugged shoulders—the well-being of crew members, directors, actors, everybody—but in interview situations Krause poker-faces through the dark moments, pulls out some PR boilerplate he’s developed, guides the conversation in different, less threatening directions.

Krause likes to think of time spent alone, in solitude and contemplation, as “Peter Krause time.”

Krause briefly contemplates purchasing a pair of Isotoner gloves at a high-end department store, goes for cuff links instead.

TV Guide: Have you hit your peak professionally, or do new and greater dramatic heights await you?

Krause: Where did you find that tie?

Krause and Lauren Graham return home from a date. Krause gives Graham an expensive princess-cut diamond ring, gold and white gold, serious society bling. Afterwards, in bed, Peter Krause imagines that he is with Maura Tierney; not Maura Tierney-as-Maura Tierney, but Maura Tierney-as-Abby from E.R. Graham would be mortified if she was aware of this, of Krause’s mental infidelity/visualization meander during sexual congress, but if she was aware she would likely imagine that Krause was visualizing Tierney as Tiny Fey’s breeder sis in Baby Mama or Tierney in Welcome to Mooseport.

Responding to something ridiculous he overheard on the flight into LAX, Krause tilts his head back slightly, lets his mouth fall slightly open, and rolls his eyes around in his head before snapping them forward—in other words, pulling a perfect Peter Krause.

As is his custom, Krause relaxes in his living room on a humid Sunday evening, iPad and white wine in hand, and Googles himself. The first result returned is titled “Peter Krause, as Peter Krause.” Allowing himself a long, leisurely sip from the wine glass, Krause clicks the first link, leans back, and begins to read.