Racism Can Be Funny

And more importantly, political correctness has no place in the arts. 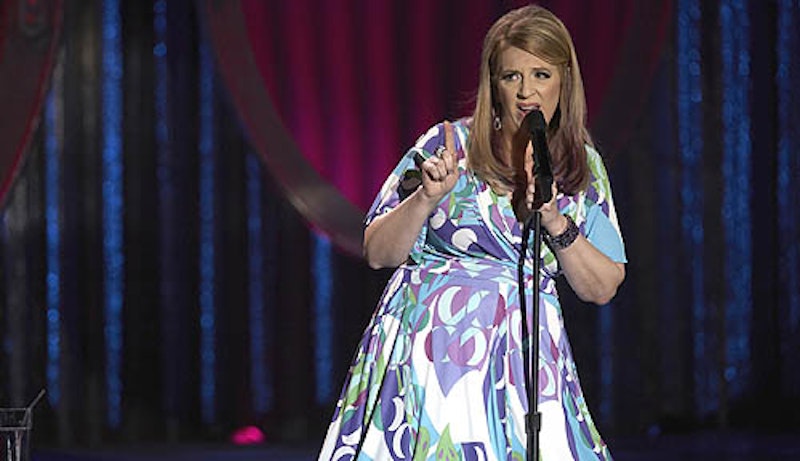 The first time I heard controversial insult comic Lisa Lampanelli do one of her stand-up bits, I was like, I CANT BELIEVE SHE JUST SAID THAT.

Lisa Lampanelli:  “I think it’s very hot that we have such sexy blacks and spics at this show. RAWR! If I can’t get raped by the end of this night I want my money back. You know what’s funny, too? I spotted some slanty-eyed gooks. Oh my god, there’s one right in the front row! Oh my god, clap for Miss Saigon...And, look, an Asian man! Look at him with his tiny penis and bound feet. Oh and they have small penises. You know what they say: once you go gook a big dick’s a fluke.”

It’s totally offensive, right? I love it! My favorite part of the whole thing is that people laugh their asses off to the sound of this white lady’s jokes about blacks and bad credit, deafs, Asians and sperm-burpers (that’s how she refers to us gays!). She’s doing a show near me in Stamford, CT but I can’t get tix because the gig is sold out. So I compensate by listening to her new CD, Long Live the Queen, laughing along with everybody else when POOF!: my Race, Class, Gender and Sexuality Hat comes out and I start to think critically about this particular cultural production. I’m like, whoa, wait a minute. Why am I laughing at this stuff? How can it be so funny to rely on stereotypes to get a good laugh? When are stereotypes funny and when are they just plain offensive?

If you ask me, stereotypes can be a real hoot. And if they’re funny at all, it’s because we’re taught that there is a grain of truth to them. Take one of my favorite YouTube comedy videos for example. It’s of this Mexican trick who has based her entire comedic career on impersonating Asians. Let me tell you, she does the best Vietnamese nail salon lady you’ll ever see. Notice that everybody in the audience is in hysterics, but how many of these people do you think actually know what it’s like in a Vietnamese nail salon? Not many. So then why the hell are they laughing? Well, it’s because stereotypes are just commonly circulated pre-conceived ideas about a group of people. They’re laughing because they’ve seen this stereotype somewhere before. When I showed this video to my cousin, who do be gettin’ her nails did, she was all “Oooo no she didn’t! They shole do be actin’ like that!”

Burn these racist broads at the stake! I don’t know, folks—it’s a slippery slope. For me, insult comedy isn’t racist because it’s totally within the language of performance. It’s racist if you’re a comedian and you call somebody a dirty *&!^@ at a concert, or if you whisper to someone “Hey, pssst, don’t trust black people.” But comedy, and any other performance art, should be protected from political correctness. Unlike full-throttled racism, time-based performances create a frame that removes whatever is contained within it from reality. A performance allows for a “public experiments,” if you will, where anything can happen that might change your position. What I love about insult comedians, especially when it’s a straight guy doing a gay joke or an Asian riffing off on other Asians, is that within the frame of comedic performance, the comedian uses outrageous stereotypes to show us how ridiculous some of the pre-conceived ideas that circulate about other people really are. Clearly not all blacks have bad credit, and not all Asians have tiny cocks. Check out Gayzian pornstar Brandon Lee and his 9er.

Just last weekend I went to see Tyler Perry’s Madea Goes To Jail, against the recommendation of nearly every movie-ranking machine. I was so annoyed that the suits over at Rottentomatoes.com gave the movie a smashing 28%; I thought it was totally brillz. The Regal Union Square 14 cinema I was in had a sold-out audience packed to the brim with black people, two Asians and my white boyfriend, all of us excited to see Madea tear it up. I was bustin’ up the whole time, too. What made everyone laugh was the believability of the stereotypes about black people and black culture that popped up throughout. Perry had nearly every black stereotype nailed, from the way Madea and her posse linked every situation to The Lord right down to her slang. The minute I hear Madea refer to potpourri as “poppa-turri,” like my grandmomma do, I’ma be rolling on the floor.

I guess you could say there’s a difference between laughing at an insult directed to a race/gender/class that you really don’t know anything about, and laughing because you know that there’s some truth to the stereotype. For me, Lisa Lampanelli, Anjelah Johnson and others are all about shock value and making fun of people as a way to get people to loosen up. They know that delivering a sassy line will get them attention. But I also think that being politically incorrect, within the frame of performance, can affect people. At the end of the day, a stereotype is nothing but a big old drag queen: it’s got on so much eyeliner and two or three hairpieces and it’s wearing a huge dress that can barely fit through the door so you know it can’t really be real. You can see the drag queen, that’s for sure, but underneath the costume is something totally different.