Awkward anti-comedy at its finest. 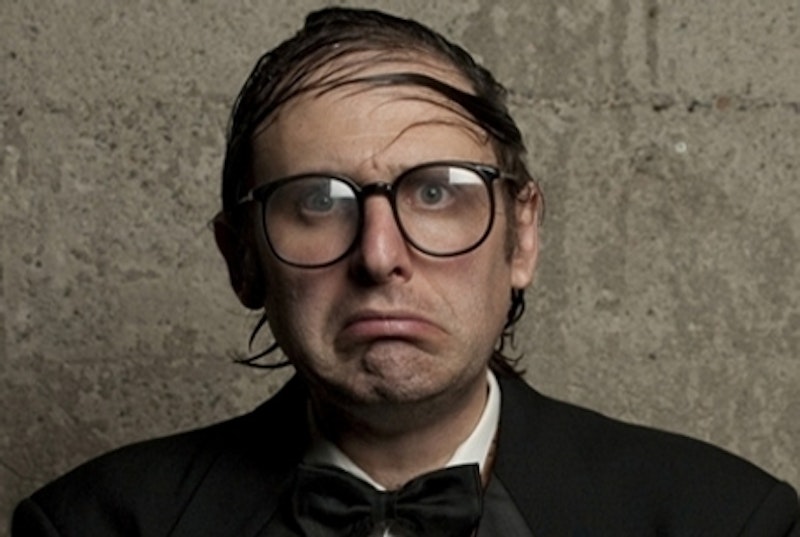 Two nights ago I finally got the chance to see a comedian I've loved for years, Neil Hamburger, America's Funnyman. For the unaware, Hamburger is the persona of Gregg Turkington, who is rarely seen in public as anyone other than Hamburger (some recent footage of Turkington as Turkington with Tim & Eric's Tim Heidecker, not that exciting). His jokes are crass, poorly recited, the pacing is off, and he frequently digresses into incoherent tangents about any number of things, from Bill Haley & His Comets to why Eric Clapton is a scumbag, all while barely keeping the lid on a volatile temper. Hamburger handles hecklers, bound to pop up at most of his shows, by hurling mixed drinks and vicious insults at them.

It was great, and lived up to every YouTube video, late night stand-up appearance, and movie cameo I'd ever seen of Hamburger, and it felt great to be watching him in a tiny club with a hundred or so ("Three hundred or four hundred people" according to Hamburger) people that loved him and knew his act cold. Fans called out punchlines, suggested jokes or routes of conversation, or just fucked with the guy, and Hamburger manned the room like a pro, despite his bumbling persona. Turkington has the character down to a precise science after performing for a decade and a half, and it was truly bizarre seeing our Funnyman in the flesh for the first time, his comb-over longer and disheveled, his hair covered in what had to be a whole bottle of Astro Glide.

I went with a few friends who’d never heard of Hamburger, and only vaguely understood the concept of his set. Reactions spanned from enthusiasm to agitated boredom—one acquaintance walked out for a cigarette 10 minutes into the set only to be called out by Hamburger ("HEY WHERE YOU GOIN' ASSHOLE"), but another was enraptured the whole time. One friend of mine didn't know what to think, whether his jokes were supposed to be as bad as they were, or if he meant to keep spilling his mixed drinks everywhere. A bit dense, honestly—nobody could see Neil Hamburger and think he was sincere. I was just surprised he didn't make any Japan jokes, though I guess he saves most of his ire for benign celebrities and tabloid fodder ("Why did Madonna ask two of her background dancers to shit in her mouth? Hey—sssshe's ssssssingle agaaaaaain!").

The set was mostly old or re-worked material, but one bit caught me off guard: Hamburger started to set up a joke about gay men, but got stuck on the word "gay" and screamed it a maddening number of times, starting over the joke periodically only to scream "GAY GAY GAY" louder and longer than before. At first I didn't think much of it, then it was annoying, then it reached a point when it all just washed over you like a good drone. As my friend said afterward, "it became like a feeling" rather than a word, and for the last few of those 10 minutes of the routine, it really felt like Hamburger was warping the minds inside of Baltimore’s Ottobar. Bret Easton Ellis would call Hamburger Post-Empire; I'll leave it at America's Funnyman.