Are you a Madonna Gay, or are you gay and just happens to like Madonna? A quest to understand the difference. From the Yale Daily News. 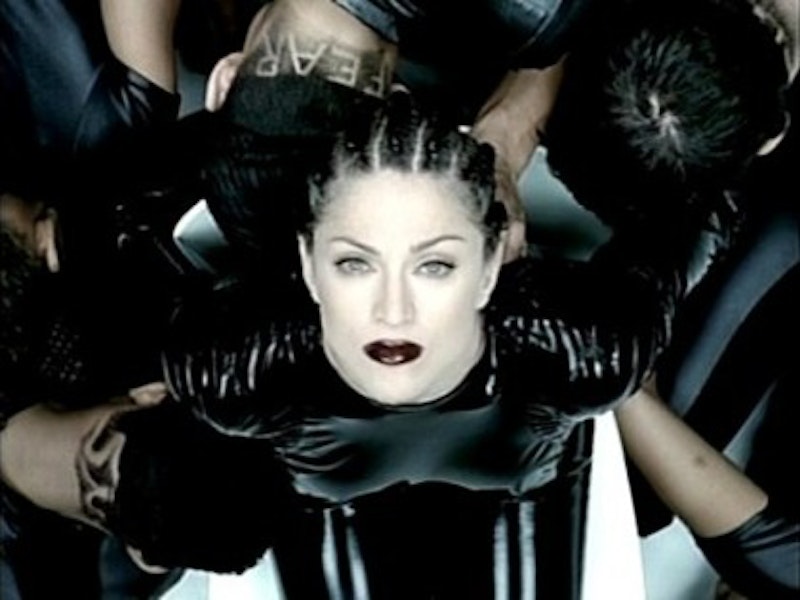 Let me take you back. Waaay back.

I’m in seventh or eighth grade, and my family is currently living in Hawaii. But because I do not like large bodies of water, sand, hot weather, the beach, mountains or seafood, I hate it there.

One day on MTV I catch a glimpse of a music video by this bitch who wears her hair braided back, and is dressed in a tight, patent leather onesie. I am enraptured. At one point, the ferocious women lip syncs while sitting on a chair, legs wide open, practically exposing her entire vajayjay. Though I am currently in heat for my best friend and next-door neighbor David Irizarry, I realize that I am equally hot for this patent leather super hero. The bitch is Madonna and the song is “Human Nature.”

At that age, I knew zero about Madonna or gay culture. I had no idea that Madonna was the ringleader of homosexualists all over the world. All I knew was that I was in love with this sassy, fierce bitch who sings about sex and cracks a whip. I don’t know what it says about me that I was attracted to that kind of personality at such a young age, but I assure you that I currently own no whips or leather onesies.

Ten years later, I can’t help but wonder: Why did I never become a hardcore Madonna Gay?

A Madonna Gay is a gay boy who squeals every time a Madonna song comes on at the club. Almost everybody knows a gay boy who owns several or all 10 of Madonna’s albums; who knows every lyric to every Madonna song; and who, at least once in his life, has worn a cone bra. I am not said gay boy, not that there’s anything wrong with that.

When I was growing up, my mother ­— a diva herself — constantly played diva music all around the house. En Vogue, Chante Moore, TLC, Mariah Carey, you name it. We would always jam to whatever diva music mom played, and she’d take my sister and I out skating on Saturday nights to jam even more.

OMG I used to LOVE that red onesie she wore in the “Oops!” video!!! LOL!!! Do you remember when McDonald’s had that special Happy Meal where you could get the Britney Spears or *NSYNC figurines?!? My mom used to get me those …

But I gradually stopped listening to Britney. I stopped reading Tiger Beat and putting the pull-outs of Ms. Spears on my wall. My Britney/gay diva obsession phase was almost over.

Then came Madonna’s 2005 album, “Confessions on a Dance Floor.” It came out while I was in my senior year of college. One day around the time the single “Hung Up” came out, I was sitting in the commons, comfortably enjoying my Wendy’s chicken strips, when one of my homos ran up to me and squealed the following:

“Not particularly … ” I reply.

“Oh my god. If you don’t like Madonna, you are not gay,” he punched.

Oh no. Pardon me while I immediately stop daydreaming about well-endowed men with hot bodies.

Determined to convert me into a Madonna Gay, my homo played me just a few seconds of the video for “Hung Up,” and I was in love with it right away. The dancing, the skating, the different colors in the video, the beat of the song … fierce! I iPoded “Hung Up” on repeat everyday until the full-length album came out. When it did, I walked STRAIGHT to Borders — and was late to class — to get it.

Just like that, I became a Madonna Gay — at least, that’s what other people started to think. My environmentally conscious, earth-tones obsessed botanist boyfriend at the time made fun of me for liking that Madonna album. “You’re a big ole queen!” he would joke. And I would tell him to go play with his plants.

“Confessions” lead to my discovery of past Madonna albums that, apparently, I’d missed out on. I started paying attention whenever Madonna was in the news, or whenever she would open her mouth. And that summer, I paid a ridiculous amount of green to see her “Confessions Tour.”

But though I loved that album, I still never really became a Madonna Gay. I still never completely lose it when a Madonna song comes on. And I wouldn’t really mind if she never came out with another album again.

Now if Vampire Weekend, Amy Winehouse or The Strokes stopped making music, I might stage a protest.

The thing that turned me on to Madonna wasn’t her music in the first place. In a way, I guess I secretly want to be her. I love anybody who says that they want to be as famous as Coca-Cola. Plus, Madonna is an enterprise, this creative self-governed mega corporation. And that’s what fascinates me about her.

Whether you like it or not, Madonna is back. Her new album, “Hard Candy,” will apparently feature an urban, R&B feel. Will I buy it? Iono. I’m not too hot about Madonna as an R&B queen. For that, I go to Beyonce. Madonna might get me “Hung Up” once in a while, but Beyonce keeps me “Crazy In Love.” You gotta love a bitch who knows how to work the extensions like Beyonce do!