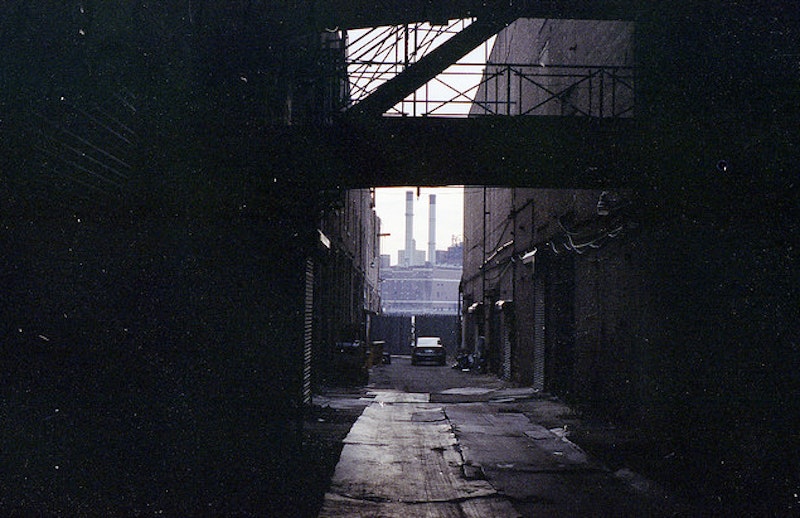 At exactly 6:30 in the morning somebody sits on the buzzer to my apartment. Who the hell buzzes an apartment this early, I wonder. My boyfriend and I glance over at one another, sleep still in our eyes, lunge out of bed, and scurry around the apartment looking for clothes. The sun’s just barely peaking out. There’s an urgency to the buzz so I cut to the chase: open the door in my underwear.

I feel the panic come over my body like a rolling pin flattening a pancake. I start searching for my cell phone and quickly dial 911. When they finally pick up, I’m nervously trying to narrate what has happened, that I’m not related to them, that they’re the supers in my building, but the operator keeps on asking a million questions and I’m just like, Can you get an ambulance here already?

The ambulance called, I go over to their apartment, which is right across from mine because there are only two units per floor. Mr. Alexander lay on the couch in his underwear, white boxers with blue stripes, and his 88-year-old skin is paler than ever. Nobody is sure just what happened, but my boyfriend calms him down, talks to him, helps, while I pace back and forth, back and forth, waiting on the ambulance to arrive.

Our building is locked to the outside, so nobody can get in without a key. It’s when I remember this that I bolt downstairs because I realize that maybe the ambulance is already here, and I don’t want them to pull off or anything. I get downstairs and they are already there, but I forget my key and it’s back upstairs and now I’m locked out. I buzz the apartment. Nothing. I wait. Nothing. One of the EMT’s, a real asshole, talks to me like I’m the dumbest person on earth because I forgot my key. Breaks the door down so we can go in.

After a while they bring Mr. Alexander downstairs on a stretcher, and as he gets into the back of the ambulance I look at him and he looks at me, but it’s almost like there’s nobody inside when he does.

Later that evening, Mrs. Alexander comes by to tell us that her husband died in the hospital. Daniel and I are both floored. We hug her and I say, over and over, “I’m so sorry. I’m so sorry.”

Mr. and Mrs. Alexander were the nicest couple, almost 90 years old and from a different era—Polish immigrants who moved here in the mid-20th century. Despite all the years in the United States, Mr. A spoke very little English, Mrs. A spoke a few more words than he did, but there was still a massive language barrier between us. Sometimes I’d see them on the street, Mrs. A in her pearls and Mr. A in his fedora, or at the grocery, or feeding pigeons in the little park down the street. And Mr. A always got so excited when he saw me, the little black boy in sequins: “Oh! Hello! How are you?” he would say in his limited English. Or sometimes he’d play rough in that father-son kind of way. A man full of zest.

How could the A’s live in the United States for so long without having any English?

My neighborhood, Greenpoint, Brooklyn, is the largest enclave of Polish immigrants outside of Poland. Everything is in Polish, everybody speaks Polish. In fact, around these parts, English is spoken way less than Polish. At my favorite donut spot, Peter Pan on Manhattan Ave., the whole staff is Polish. At my local grocery, all the cashiers are Polish and all the stock boys are Polish, most of them my age or younger. They also speak little to no English. I live next door to an APTEKA, that’s Polish for Pharmacy, and across the street from Lomzynianka—an All-Polish-All-The-Time restaurant. Sometimes I feel like an outsider here in Little Poland, and I’m sure the Polish all hate the hipsters moving in, but that’s what makes the neighborhood fun and interesting.

It’s kind of amazing that Mr. and Mrs. A were able to carve a place for themselves in Brooklyn that was in the US but still just a little bit like home. While we waited on the ambulance, Mrs. A told us that she had no descendants, no kids, no family in the United States. “No children, no nothing” she said. Later on, while talking with a tenant who has lived in the building longer than I have, I found out that Mrs. A doesn’t have any children because she was in a concentration camp.

I know we all have to go, but what really makes me sad is that Mrs. A. lost her one companion of countless years, in the once place where she could escape to and find community. This is a lesson for all on the value of companionship, love, and community.