If You See Something, Look Away

The bigger the city, the more we're forced to ignore in public. 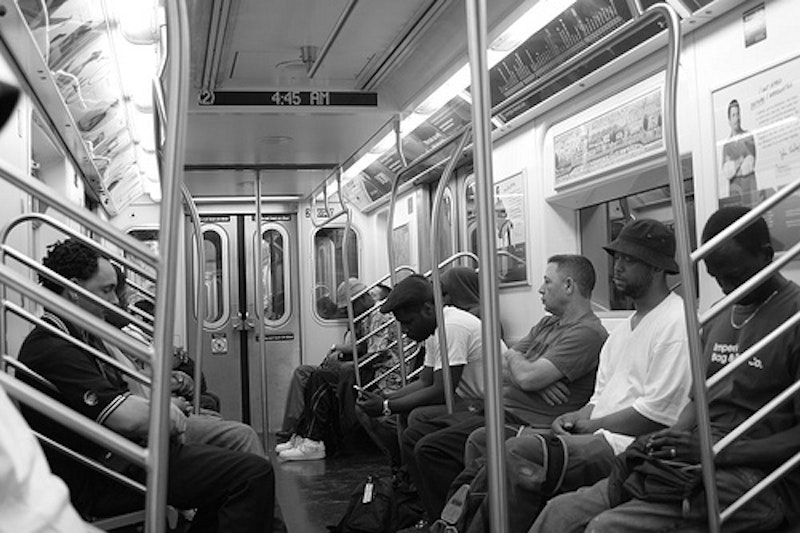 Photo by mK B.

I'm at Stamford on the Metro North train to New York and this Ultra Diva climbs into the car. Herds of people storm in, with no room to move. I'm trying to avoid the Swine Flu, so I instantly look busy and plop my bag on the seat next to me so nobody sits down. The Ultra Diva sits down.

It's okay, though, because I like what she's wearing. The Ultra Diva's in a brown pencil skirt so tight that it encourages me—a gay dude—to observe her ass. Hard not to do since she smashed it in my face while squeezing into the three-seater. A suede blazer that I really like, black leather motorcycle gloves. Black leather knee-high boots, Gucci bag. A touch too much make-up.

We arrive at Grand Central and the Ultra Diva sashays out of the train. Her stiletto boots clack clack clack on the ground, she thinks she's on the catwalk.

I really wanted to say something to the Ultra Diva, but had mere seconds to react, didn't know how to broach the subject. Actually, I'm not totally sure I would want someone to tell me I had an incriminating stain on my pants. I'm so O.C.D that I would make sure there was no stain to begin with. Like when I brush my teeth in the morning, I double, triple, quadruple check that there's no dry toothpaste, out of fear that the toothpaste will look like I had dick for breakfast.

New York is full of subtle moments like these where you really wish you could say something to the person—you're dying to—but for some reason you don't. How many times have I sat on a crowded subway and somebody had his or her entire crotch in my face?

Of course, I acted like I didn't notice the crotch. Ho hum, you know, just the usual crotch-in-the-face. How do things like this become normal? I'm so busy in my sunglasses listening to my iPod playing a game on my crackPhone pretending I'm all alone that I don't notice anything. The subway is filled with advertisements that read: "If You See Something, Say Something." Ha! The truth is that most New Yorkers See Something and then Ignore The Hell Out Of It.

I try really hard to ignore people, especially on the subway. You gotta avoid the WHAT THE FUCK ARE YOU LOOKING AT? glare. But sometimes people are too weird/well-dressed/hot/ridiculous that you end up looking without looking. And sometimes, you get caught and you're like Oh Fuck. Once on the L train a couple years ago I saw this really, really hot dude who was sitting with this chick, eating her face. I was secretly ogling the dude, sneaking a peak here and there as I yawned or whatever. I think the dude knew I was staring, because he stared back the whole ride. A.w.k.w.a.r.d.! Perhaps it was a performance piece.

Call it one of the pleasures of living in New York, a city full of folks who thrive on voyeurism. You can see your neighbor's every move from the secrecy of your place. L.A.'s super swank Standard Hotel just opened a glass façade building on top of a park in the Meatpacking District, and you can see everything that goes on inside but the residents can't see you. That's the funny thing about voyeurism—everybody wants to see but nobody wants to be seen seeing.