Like only the best pulp fiction, Alan Ball’s new vampire show triumphs because it moves quickly and avoids pretension. 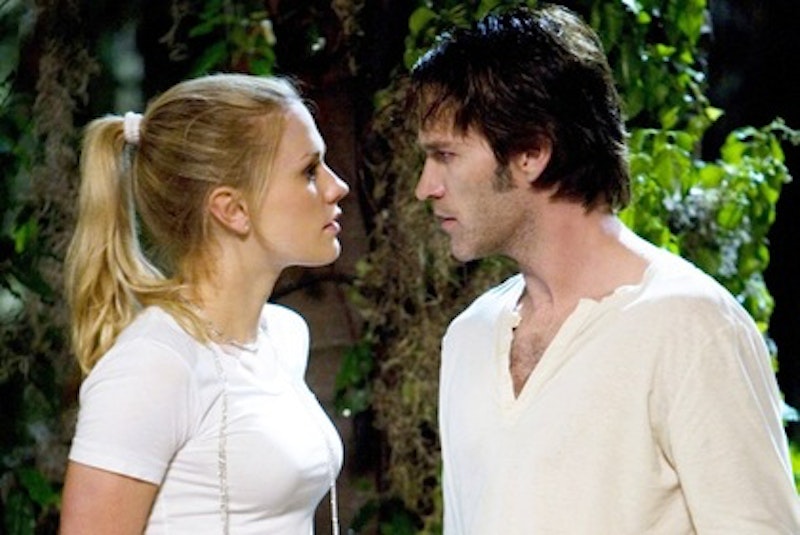 With the possible exception of Paul Haggis, there may be no one more skilled at affirming the preconceptions of liberal culture than Alan Ball. His paean to baby-boomer self-righteousness, American Beauty, reminded an aging population that solipsism and marijuana are the keys to spiritual regeneration. His acclaimed hourly drama Six Feet Under took as its focus the broad theme of death, a conceit so grandiose it would have been charming if the show itself wasn’t so nauseatingly self-satisfied, and his new film Towelhead broke ground with its courageous denunciation of bigotry. Having spent the last decade discussing complex issues in stupid ways, Ball strikes out into new territory with HBO’s True Blood, which cuts through his traditional veneer and is just flat-out stupid.

After the first episode of True Blood I swore I would never again waste another second of my time on such mindless pap. After the second episode I began to wonder if Californication didn’t have competition for the most horrifically inane bit of programming on premium cable. After the third episode I was sent into nearly apoplectic fits of rage at the absurd contrivances of this soft-core pornography flimsily masquerading as an hourly serial. After the fourth episode… well, you get the picture. We’re almost at the end of the first season and if True Blood hasn’t gotten any smarter, I’ve at least gotten better at admitting the truth; this is damned entertaining television, as unpretentious and enthralling as watching a retard shit himself.

Based on the first in a series of horror/sci-fi/romance novels entitled The Southern Vampire Series, True Blood tells the story of Sookie Stackhouse, a young, psychic virgin who lives in a world very similar to our own, except populated by better looking people. Also, vampires exist, have announced themselves to the world at large, and even form a subculture which struggles to fit into the social tableau of modern American life, a conceit which provides Ball frequent occasion to reference the struggles of contemporary minorities. (Because, you know, blacks eat people.) Sookie’s and her small Louisiana municipality are turned upside down by the arrival of Vampire Bill, who, between bouts of virile brooding, quickly envelopes Sookie in a web of mystery and intrigue. Together with a crew of poorly fleshed out characters, Sookie and Bill begin a series of supernaturally flavored adventures, most of which involve soft-R nudity.

Make no mistake, True Blood is incredibly silly. The dialogue is vapid to the point of being only tenuously reminiscent of human speech; you wonder if perhaps the writers weren’t the subject of some sort of cruel social experiment, raised without the benefit of human contact and let loose in Hollywood to imperfectly reproduce the communication of the species they had long been secluded from. The ensemble cast seems to have been chosen largely for their appearance semi-clothed and only secondarily for any skill in mimicking human activity. Anna Paquin as heroine Sookie Stackhouse is fiercely incompetent in a role that requires little beyond the stock activities of being well-proportioned and occasionally screaming for help. In particular, her accent betrays no hint that she has ever, at any point, spoken to anyone living below the Mason-Dixon.

All this to the side, True Blood is tremendously entertaining. Ball was always a slick filmmaker, and divorced of his (inaccurate) belief that he has something profound to tell America, he manages to make compelling television, brewing an addictive stew from less-than-inspired ingredients. You overlook the risible dialogue and preposterous storyline, fascinated by the sheer absurd momentum of his project. In the best tradition of the pulp genre, events come fast and furious, unconstrained by grim logic or indeed any causality beyond what I assume is a contractual obligation to have two-three sex scenes per episode. Before you have time to complain of its absurd character interaction or inane dialogue you’ve moved on to the next development. It’s incoherent at times (most times) but damned if it doesn’t hold your interest.

Television is valuable either because it stimulates or deadens one’s perceptions. Highbrow fare, like The Wire or The Sopranos, force us to reconsider our perceptions of man and society, aiming to encouraging a deeper and broader appreciation for our own lives. By contrast, the purpose of lowbrow fare, of which True Blood is very much an example, is simply to muffle our minds to the banal grotesqueries of our day-to-day lives, like vodka or religion. The objections I have raised against True Blood—that the acting is poor, that it doesn’t really make any sense—are only valid when leveled against television in the first camp; they are no real criticism of the second. Rail liquor gets you drunk just as fast as top shelf, after all, and that I find Anna Paquin utterly unconvincing in her role doesn’t stop me from wanting to find out what she’ll do next.

It’s actually not that easy to create engaging pulp, as a random sampling of three hours of network television will easily confirm. As shows like Heroes meander endlessly, tightfistedly doling out their few climactic moments throughout the course of hours of dispirited drivel, True Blood provides virtually unceasing entertainment. Increasingly it looks like Alan Ball has missed his calling this last decade—he’s not America’s worst smart filmmaker, he’s America’s best dumb one.