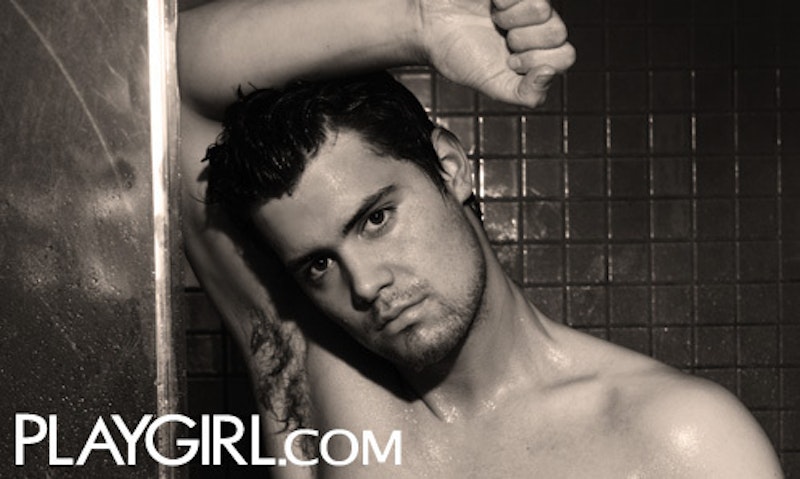 I don't normally read Playgirl, but you know I will when the Levi Johnston issue hits the Internet. His is sure to be the cock seen ‘round the world. Recently, I nearly died when I read his New York magazine interview. The reporter just had to ask how big his piece was. Levi: "A lot of people ask that, but you're just going to have to wait until next week when the magazine comes out. You will have to wait and see. I'm sorry, you're going to have to." What did the reporter expect him to say?: "It's big, it's beautiful, and you're gonna love it"? Levi may not be the smartest hunter in the forest, but you gotta hand it to the man - from obscurity to Palin Family Pawn to Kathy Griffin, Oprah and Playgirl—this dude knows how to hoe himself out.

And what could be more American than that?

It amuses me that conservative politicians and their BFFs still believe that Americans are all about values, chastity, family, the sanctity of marriage, etc. Remember Palin's whole performance piece during the elections? She was all: "Look at how pious I am."

But who actually cares about piety? What people really want is scandal. Excitement. Newness.

The Internet nearly exploded when a sultry photo of Meghan McCain appeared on her Twitter account. My favorite Republican lets her hair down and holds up an Andy Warhol book right next to her very big boobies, which are all hanging out. Ferosh! The pic was staged, natch. And the message she's delivering is: Hey, I'm young, sexy, hot—and I like Andy Warhol! I'm the Lady GaGa of Republicans. Meghan sure knows how to give Americans what we want: sluts! I'm not saying Meg's is a slut—I'm saying she knows celebrity sluts start the engines of publicity.

That's why I'm so excited about Levi's Playgirl debut. Not because I really want to see his stuff—he's not that hot. Whether he knows it or not, Levi totally captures what being American is all about. Here's a fairly good-looking dude from out-of-nowhere Alaska who the Internet is now obsessed with, and whose dick is gonna be available for all to see. Only in America can you be a celebrity because of your dick.

But will our formerly obscure hero's fame last for long? It's hard to tell, right now, when almost everybody is famous. Levi's C-List fame is a reality television celebrity because he was a nobody who is now possibly gonna be a somebody. Nobody knew who he was until a sudden, very public exposure. The thing that keeps Levi down, though, is that he's super dull. As in, not very interesting, can't stand on his own. I don't know that I would go see a movie he was in. But then again, wouldn't I???

I guess that's the value of being in Playgirl: total exposure, exploitation, and you don't even have to talk. Just get hard, and we'll do everything else. Remember Mark Wahlberg? He showed us his stuff in Playgirl, and now he directs television shows. What if Levi Johnston is the next Mark Wahlberg? I know Mark's got a role for him somewhere—maybe on an episode of Entourage?

In some ways, it doesn't really matter what happens to Levi after Playgirl. We will be living with this dude for a little while. Because today, you can be anybody if you understand the engines of publicity. It doesn't really matter what you do—just make a spectacle. I imagine Levi's next gig to be celebrity endorsements of rifles. But so what? He will now be infinitely richer than your or me. Andy Warhol—the most American of us all—did tell us he didn't care what people said about him - he only measured it in inches. Levi doesn't care what we say about him, either. He's just giving us all his inches.