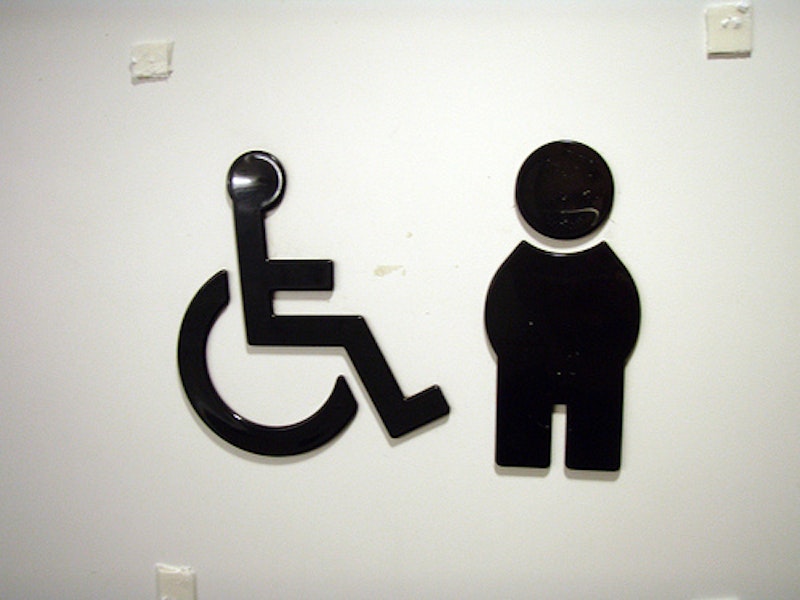 Last night, waiting for yoga class to begin, I noticed that the woman on the mat next to me had a large amount of athletic tape wrapped around each of her knees. When I asked about the injury, she explained that she had been suffering from a repetitive stress injury, and was now returning to physical exercise after a long time away. During that time she’d gained some weight, which had made her quite unhappy.

I observed aloud that, while the weight gain wasn’t ideal, it was the right decision to allow her knees to heal before putting pressure on them again. She chose to prioritize her health, rather than inflicting pain on herself and risking permanent injury in the quest to stay slim. It was a wise and brave decision. We live in an era that not only equates thinness with health, but also values the former over the latter.

Our culture holds a host of false and not particularly flattering ideas about those who are overweight. Fat people are, in our imagination, out of control, slovenly, greedy and stupid. They don’t know what’s good for them. They eat mindlessly and with abandon, without regard for their health (or for the sensibilities of the virtuous skinny people who have to look at them on the subway). And yet, this woman, this “fat” woman, made a sensible decision. Given the choice between taking care of her joints and hurting herself to stay a size four, she resisted the urge to mindlessly pursue the thinness that our culture tells us is healthy and attractive.

Beauty is subjective, and our ideas about what makes a woman’s body beautiful are a complex combination of cultural norms and personal preferences. But the medical facts about fat and health are not so subjective. You’d never know that being fat isn’t actually all that unhealthy. In fact, studies show that the fat often outlive the thin, are more likely to survive cardiac events and may be protected—by their fat!—against “infections, cancer, lung disease, heart disease, osteoporosis, anemia, high blood pressure, rheumatoid arthritis and type 2 diabetes.” What is unhealthy is the combination of poor nutrition and a sedentary lifestyle, neither of which necessary causes a person to be overweight.

Given this, my yoga-loving friend made a very healthy choice when she chose short-term weight gain over long-term joint damage. In a culture that scorns overweight people as undisciplined, unhealthy and altogether repulsive, to deliberately do something that is likely to cause weight gain is even subversive choice. If pregnancy weren’t necessary for perpetuating the human race, women probably wouldn’t do it—at least, that’s what we must assume based on the seemingly endless stream of “how I lost the baby weight” tabloid cover stories.

It takes courage to be fat.

It also takes an enormous amount of forbearance. The hatred directed at fat people is astounding; often, it borders on dehumanizing. Hating people for being fat, whether out of malice or supposed concern for people’s health, is considered perfectly acceptable in our society. Recently, we demonstrated just how potent our hatred for fat people can be: Objections to Dr. Regina Benjamin’s nomination were cloaked in faux concern about the example that a fat Surgeon General might set for the American people. And yet, there can be little doubt that it was because of our hatred of fat people that this country was left without a Surgeon General for many months—during a deadly swine flu outbreak. Talk about unhealthy. The vitriol of fat-shaming that occurs in our culture, from seemingly trivial throwaways like “no fat chicks” jokes, to the very real financial discrimination, like United Airline’s decision last year to charge fat people double for their plane seats, is astonishing. And in most circles, it’s considered acceptable.

Some might argue that the obesity epidemic (or as fat acceptance blogger Kate Harding calls it, the “obesity! epidemic!”) puts an untenable strain on our healthcare system and our economy. But I would argue that what really endangers our society, what really strains our long-term health as a culture, is the unfounded, discriminatory and corrosive hatred for an entire subsection of our population.