For some of us, gay pride is a simple matter of everyday life, but others need 10,000 semi-naked friends, and good for them. 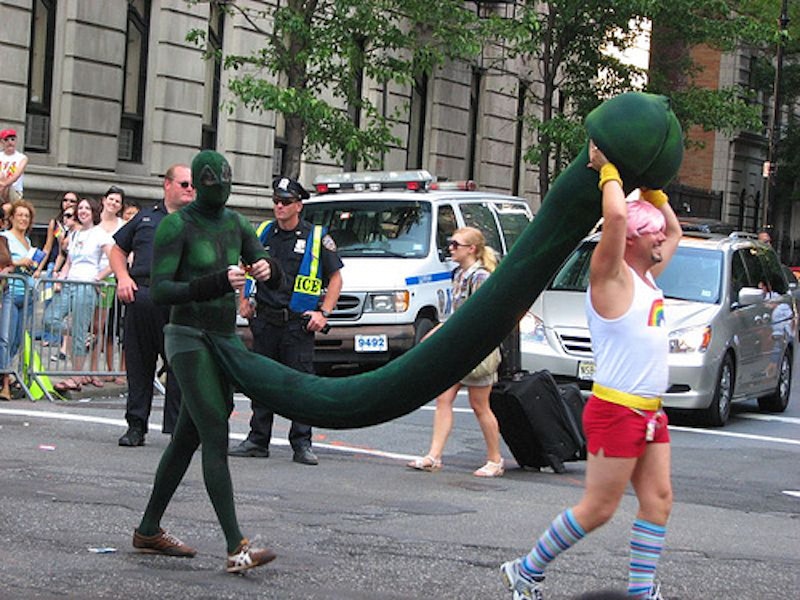 I’ve got an appointment with an editor of a high profile magazine, so I’m trying to bolt it to the West Village. When I pop into the unusually crowded subway, the first thing I notice is a group of gay dudes doing the dance to Beyoncé’s “Single Ladies.” Work it out, trannies! Next to them is a group of people, all wearing various renditions of the rainbow gaycon. I know they are tourists because of the foreign languages and the weird accents and the huge subway maps that they can’t manage to refold. I get out of the train at 14th St., headed to Doma cafe, but the streets are so crowded I can barely move. Everybody’s out—literally. Boys kissing on the street. Girls doing the same. Leather daddies out in full daddy regalia.

New York Gay Pride, after San Francisco, is probably the biggest of the American summer gay pride festivals. And I did everything I could to avoid it! How could I be so over the hottest day of the gay year?

On Gay Pride Sunday, joyous queens, dykons, and daddies parade down 5th Ave. and into the West Village, right past the Stonewall Inn where the gay liberation movement got its start in the riots of 1969. That riot was about gay folks getting sick and tired of being treated like shit by the po-pos. I know if I constantly had people breathing down my back about what gender I like, I would just snap my fingers and get all up in they face until they left me the hell alone.

The Stonewall riots of 1969 happened 13 years before I was born. Growing up in a “You-Will-Burn-In-Hell-If-You-Are-A-Homassssesual” household, I had absolutely no concept of either gay liberation or gay pride. I just knew I liked dudes. Point blank. I never even heard about the Stonewall riots and stuff until I got to college and joined my first LGBTQ-MNOP alliance.       We had weekly meetings to talk about Pride Week on our campus, or about which famous gay mouthpiece to bring in for a campus-wide talk. It was all so social and fun. At the end of our meetings, we’d go out for drag night at the local club. That’s when I first got exposed to drag queens, who actually scared the shit out of me.

But even with my membership in the gay group, I had this profoundly ahistorical sense that, “Oh, gay liberation was then. This is now. Those dudes are all olds now. I’m just young and I like boizzzssth. Omg yay!”

For most people, Gay Pride is about visibility. It’s a day with a free pass for being as fabulous and dykonous and raunchy as you want. Walk the streets in your tallest wigs. Smear your repressed sexuality all up in everybody’s grill.

My first Gay Pride was in San Francisco, the mecca of same-sex boning. I was probably something like 19, but did my best to get an ID that said I was 21. I was a wild child back then. I wore ridiculous clothes. My hair was bleached gold. I skipped class to go out all night. Hey, it was my first time being away from home and in a big ole gay city, so I was doing everything        I could possibly think of to gay it up.

The thing is, even after going to the Castro, and being in the fag parade, I still didn’t know why I was in it, like what the whole pride thing meant. I was just doing what everybody else was doing because as a gay I thought you were required to be in the parade so I was.

As I’ve gotten older, I’ve grown reluctant to do gay stuff all the time. I used to only go to gay places, or want to live in the gayborhood. And that’s how it is for a lot of gays: we only want to do gay stuff. How could you blame us? You go where you feel wanted. Plus we run all the hottest neighborhoods.

It wouldn’t surprise anyone to say that my generation of gays takes the fights and struggles of Stonewall 1969 for granted. The fact that I can walk down the street holding my boyfriend’s hand and remain virtually safe is pretty neat. The fact that gays can get married in fucking Iowa is fabulous, if random. The fact that you can go to a gay bar and not have the police come in and raid it is also neat. (I mean, unless it’s The Cock, which is, um, a whole other article.)

Guess I’m just saying that I’ve come to think of gay as being normal, being just like everybody else. I don’t feel the need to act out gay stereotypes or be Mr. Ultra Mega Fag like I used to. You know, there was once a part of me that really felt the need to make my gayness plain, in your mutha-fuckin face, and unforgettable. The Gay Pride parade, for me, was that catharsis.

Over the years, though, I have depended less and less on Gay Pride. What annoys me in the end is that Pride has become just another summer festival that gives huge tourism dollars to big cities. I can’t tell you how many people I know who have scheduled summer vaycays in concert with Gay Day in A City Near You.

Fags are fabulous. But we don’t need Bacardi Limon to tell us that.