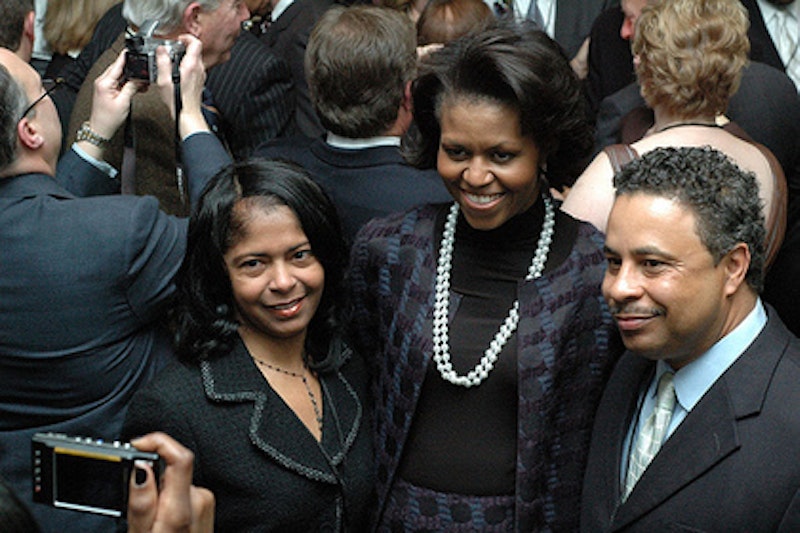 Photo by My Hobo Soul.

It goes against one of my main personal tenets of not hating on other women, but I just can’t help it. She’s one of the most vapid, self-obsessed, irritating people that I have ever encountered on television. So for Harper’s Bazaar to slap a wig and some business-wear on the former model-turned-TV personality and have her pose as the First Lady in an obvious emulation of Michelle Obama (a Barack look-alike and two young “daughters” accompany her in nearly every picture) really gets my blood boiling.

I take issue with this spread for two reasons: First, Michelle Obama is not the First Lady (and for that matter, neither Banks). Had Harper’s Bazaar obtained an interview and photo-shoot with the actual Michelle Obama, I highly doubt that they would have depicted her beaming from behind a desk in the Oval Office as her husband, the President, takes a phone call, or that she would have agreed had they proposed it. To have Banks essentially portray Michelle Obama in this manner is thus both ridiculously stupid and misguided. Second, Banks is not Michelle Obama. Obama is a Harvard-educated lawyer and mother of two who speaks intelligently and eloquently about American politics, campaign issues and the importance of recognizing the difficulty women face when attempting to balance a career with motherhood. Banks, while certainly a successful model and pretty savvy businesswoman—she sure knows how to market herself—is best known for rhetoric like, “Smile with your eyes,” and, in response to an unflattering tabloid swimsuit photo, “Kiss my fat ass!” or my personal favorite, “H2O-No you didn’t, gurl!”

Perhaps I’m letting my personal disdain for Banks to inordinately impact my opinion. I can understand the reasoning behind the Harper’s parallel. Michelle Obama could become the country’s first African American First Lady; Banks was the first commercially successful African American model. Plus the accompanying interview is largely devoted to Banks’ thoughts about both Obamas and what she would do if she were First Lady. It’s this discussion, however, that really irks me and stands as evidence that Banks should never be held in the same esteem as Michelle.

About the potential first lady, Banks says that she was “so warm and so gracious. She’s got that direct-eye-contact, truly-connecting thing.” There’s nothing wrong with that per se, but then she goes on to add, “She’s not a ‘ha, ha, ha’ type…And I love that she’s tall.” And while Banks is correct that “being first lady is not just about being the wife but really taking command and having a true vision,” she later throws out any respect this answer may have earned her by saying that a first lady would “need to know how to take a fierce picture but at the same time be able to eat fried chicken, have grease on her fingers, and be okay with getting photographed like that too.” Obviously Banks means that she wouldn’t want a first lady to take herself too seriously—given that if she became first lady she’d want her Secret Service acronym to be “KMFA: Kiss My Fat Ass,” seriousness is clearly not one of her priorities—but there has to be a better way of expressing that than insisting on a greasy-fingers photo-shoot.

That’s all part of the problem though. For Banks, life is like one big photo-shoot. She can pose as the first lady one day and stand on stage during the taping of her talk show in nothing but a flesh-colored bodysuit the next. Nobody seems to mind the hypocrisy that The Tyra Banks Show acts like a nonstop PSA about how women should feel happy and beautiful no matter what their size, while America’s Next Top Model is all about finding the next up-and-coming young star for an industry that relies on women resembling clothes hangers. Michelle Obama, on the other hand, is subject to real public scrutiny. If she wants to stand beside her husband in the Oval Office, it’s going to take more than a crummy-looking wig, some set design and camera crew. Banks is right that in a way, Barack Obama becoming president will be about Barack and Michelle becoming president—what she says and does can affect his campaign. It’s fine for Banks to be inspired by Michelle Obama, but young girls and women in America need admirable role models and I’d hate to think that they could get these two women confused.