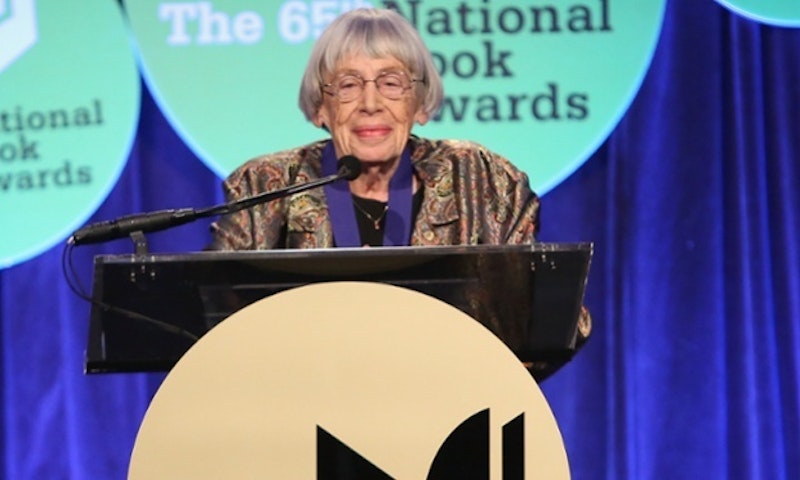 "I think hard times are coming when we will be wanting the voices of writers who can see alternatives to how we live now and can see through our fear-stricken society and its obsessive technologies to other ways of being, and even imagine some real grounds for hope." So Ursula K. Le Guin declared in her brief, barn-burning speech at the National Book Awards, at which she accepted the medal for Distinguished Contribution to American Letters. Le Guin's most famous work is in fantasy and science fiction, and she used her speech to make the case for the radical necessity of those genres. "We will need writers who can remember freedom," she said. "Poets, visionaries—the realists of a larger reality."

Le Guin's work has often explored radical, politically challenging alternative futures and worlds—The Dispossessed (1974) is a vision of an anarchist utopia; The Left Hand of Darkness (1969) imagines a planet on which humans have evolved into hermaphrodites, all a single gender. But her speech, with its explicit call to resist our current economic system through imagination didn't exactly point toward any of her own books. Instead, it reminded me most forcefully of A Woman on the Edge of Time, a book by Le Guin's less well-known contemporary, Marge Piercy.

A Woman on the Edge of Time is dedicated to showing, and celebrating, the power of imagination to provide alternatives in the face of a crushing, stifling capitalism. The hero of the novel, Connie Ramos, is poor, Hispanic, and (according to her doctors) mentally ill—she spends most of the novel in an insane asylum, incarcerated for attempting to defend her niece from the niece's pimp. Marginalized and despised, Connie has virtually no power—she’s even subjected to experimental treatments by doctors working to develop brain control.

But even though capitalism's power here, as Le Guin says, "seems inescapable," Connie escapes it. She is, it turns out, receptive to psychic transmissions, and as a result she’s able to make contact with a woman from the future named Luciente. Luciente pulls Connie into the future utopia of Mattapoisett. On her brief visits there, Connie sees a world where capitalism has been replaced by a communal society, in which everyone has enough to eat, shares in administration and farming, and has time to pursue the things they love, whether art, science, love or sex. "In Connie's time it was thought some people who were good at some things, like a couple of the arts and sciences, should do nothing else," one of the Mattapoisett inhabitants explains, to which Luciente responds, "That must have made them a little stupid… A little simple, you grasp? And self-important!"

Again, you could see Piercy as almost dramatizing Le Guin's speech—as fighting the bleak givens of realism with a fantastic sci-fi dream. But A Woman on the Edge of Time is more complicated than that. It's not just a piece of fantastic literature; indeed, much of it is devoted to a painfully clear-eyed delineation of the limits of reality. Connie's life is hemmed in by petty slights, indifferent bureaucracy and callous control. After a fight with her niece's pimp, the hospital staff will not even check her broken ribs; when she complains of pain, they assume she's crazy, and simply leave her strapped on a gurney, to lie in her own urine. One of her first lovers, Martin, was killed in a knife fight; her husband, Claud, a pickpocket, was arrested, and killed in prison as part of a medical experiment with the hepatitis virus. In despair following Claud's death, Connie in anger hits her daughter—and is quickly ground up in the social welfare infrastructure, which sends her to an asylum and her daughter off to foster care.

In the face of this painful everyday defeat, Connie's dream of Mattapoisett can seem not so much like an alternative as a helpless escape—and an escape which makes things worse, rather than better. Inspired by her vision of a communal future, Connie contrives to poison several of her doctors. She sees this as a triumph; a battle in a war to bring Mattapoisett into being—"At least once I fought and one," she thinks. But her act of violence actually severs her from the imagined future: "She thought of Luciente, but she could no longer reach over. She could no longer catch. She had annealed her mind and she was not a receptive woman. She had hardened." The fantastic literature Le Guin praises, the turning away from reality, seems, in Piercy's novel, to lead, at least potentially, not to a triumph over capitalism, but to fanaticism and death.

Piercy is a radical herself; A Woman on the Edge of Time is meant as a vision of a better future—a world in which hierarchies of race, of class, of gender, of who is supposedly sane and who is supposedly not, can be overturned in favor of a more equal, more respectful world. But the novel’s also a warning about the limitations of fantasy and the ways that imagining can go horribly wrong.

That warning is especially salient at this particular historical moment, in which fantasy and science fiction have become so ubiquitous. Our screens and novels are filled with super-heroes, YA dystopias, fantastic wizardry and special effects extravaganzas. The world Le Guin warns against—a world in which realism is ascendant, and fantastic visions are denigrated—is not the world we've got.

Instead, we have lots of people who "can see through our fear-stricken society and its obsessive technologies to other ways of being," but maybe fewer who are willing to look at our current ways of being and how precisely they render us fear-stricken and powerless. I don't think it's an accident that Le Guin, who has worked in sci-fi and fantasy throughout her career, is now seen as an important foremother of contemporary letters, while Piercy, whose relationship with genre was more mistrustful and uneven, is less heralded. Le Guin is one of my favorite writers, but I wonder if her praise of fantasy over realism is necessarily the battle cry we need right now. "We can only know what we can truly imagine," Luciente tells Connie, but A Woman on the Edge of Time also reminds us that disconnected from the reality we've got, imagination alone can't be enough.