It tries too hard to shock and sensationalize. 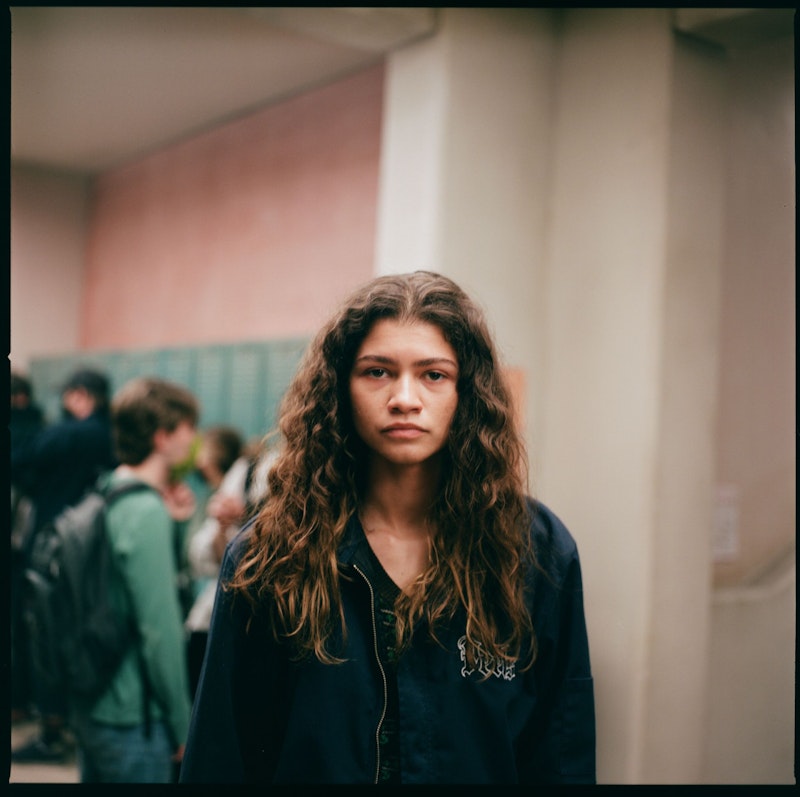 I was late to the HBO series Euphoria, but that's okay. The days of water-cooler chats about a popular series—the first time I can remember it was with The Sopranos—are gone. Euphoria, a series name that must be ironic, grabbed me right away. It has a talented young ensemble cast, featuring Zendaya (as "Rue," and also as the narrator), a 25-year-old former Disney actress  and singer. The actress allows her beauty to be scuffed up so she can portray a drug addict, and what a portrayal it is—gritty, even feral at times. Writer/director/auteur Sam Levinson, son of film director Barry Levinson, is the man behind the grim teen drama. When Levinson's writing fails him, his cast often saves the day.

The central premise of the stylized, artsy, series is how the lives of a bunch of troubled (sometimes beyond troubled) high school students are intertwined. The results are, as one might expect, often disturbing. Levinson goes heavy on the sex, drugs, and violence. The high school these kids attend makes mine look like an ashram.

Angus Cloud plays drug-dealer Fez, who hooked Rue on drugs and then has to deal with her constant, unwelcome visits to score. Cloud's soulful performance is stunning, and he pulls it off with an economy of words. Fez is a blend of menace and sweetness. Unlike almost every other character, his demons aren't always on full display, which provides a needed respite amidst the exhausting havoc of nearly every scene. It's telling that a dealer of hard drugs who's capable of violence is one of the more likeable characters.

Levinson goes heavy on male nudity, but less so with female nudity, although the director takes every opportunity to show us Cassie (Sydney Sweeney) topless, for obvious reasons. Sweeney said in an interview that she told the director a number of times that a scene didn't require her to take off her top, and that he relented, probably because he knew she was right. Levinson's use of nudity in this series often suggests exploitation and prurience rather than a desire for realism. He knows what sells. There's enough substance about half of the time to compensate for the pandering.

Levinson obviously wants as much nudity as he can credibly cram into Euphoria, for the titillation factor. But the nudity is often unnecessary, as Sweeney alluded to. Cal (Eric Dane), the freaky father of Nate, a vicious high school psycho, decides to take a leak in the foyer of the family home as a parting gift before moving out. Still exposed, Cal then launches a brutal verbal attack on his wife and two sons who are looking down, aghast, from the second story. I didn't buy it.

That scene typifies the downside of the series. It's one thing to be brutally raw, which Euphoria strives for, but the director doesn't want to tone down the over-the-top sensationalism. It's a self-conscious, self-indulgent approach, suggestive of a lack of confidence.

Euphoria has a supercharged Bret Easton Ellis vibe to it. But one thing the show lacks is fun. There's no humor in the series. With all the misery the characters are buried in, one might think they'd at least now and then feel the need to lighten up. Levinson's capable of making a subtler version of the show, but he has no interest in that.

It's a foregone conclusion that every single teen party involving this group's going to descend into either violence, or at least some form of psychological mayhem. Someone's going to get beaten badly, or someone's girlfriend or boyfriend's going to hook up with someone else. At one party, it's right in the swimming  pool where the boyfriend, the character Nate (Jacob Elordi) can watch and then go into a violent, jealous rage. Nate later stalks the guy who unwittingly ended up with his girlfriend in the pool and nearly beat him to death. Nate's father’s a closeted homosexual who has sexual encounters with underage boys, girls, and transexuals. This show never lets up.

I didn't have enough interest in the characters to continue after finishing season two. Euphoria feels like a soap with high-HBO production values. I knew Sam Levinson would try too hard, and I don't need three seasons of unrelenting bleakness and nihilism. With his writing and directing style, Levinson has the ability to create a unique world for audiences to enter into. Two seasons of that world was enough for me.