Just because you can talk, doesn't mean you have something to say. 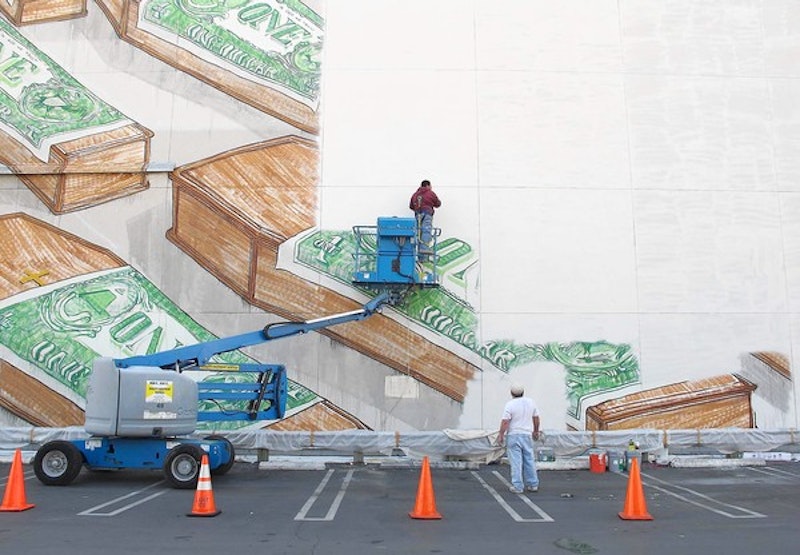 Last week, a mural designed by graffiti artist Blu was painted over just one day after it was created. It was legally sanctioned by LA’s MOCA, but it didn’t survive the rigors of public opinion or a coat of white paint.

Most street “art," if I can speak freely, is bullshit. While the transformation of a public space into an environment that provokes thought (or at the very least, whimsy) can’t really be a bad thing, a vast majority of street art is just macho posturing, writing your poorly-thought-out name-phallus larger than the people who have come before you, and evading the (presumably artless and evil) police. It has every questionable merit of a hasty scrawl made for no other purpose than self-aggrandizement, and it’s gross. There are plenty of guerrilla artists who transcend this, and Blu has always seemed to be one of them. He’s responsible for some amazingly complex, human works that truly justify their building-sized scope, and the equally inspiring “Muto,” a beautiful and skillful animation created entirely on public buildings.

When an artist who excels at art brut portraiture and figurative works on an enormous scale turns to drawing a series of coffins draped with dollar bills, it feels like a huge step backward. Blood for war for oil for whatever is the kind of cliché thought that’s become so commonplace that it’s a standard among high school art students who would rather make a pathetic attempt at being controversial than learn how to actually draw. Of course, it’s a valid concept to be upset about, but at this point, there’s nothing left for artists to say. We just need to wait for the sun to go supernova for anything to change for the better. Or, you know, wait for human avarice to calm the fuck down. Tell me which will happen first.

Unfortunately, this sad stumble back into mediocre ideas, scrawled crookedly on a wall across from a veterans’ hospital and a war memorial, is an unsettling departure for Blu. What the work lacked in intelligence and creativity, it also lacked in artistry and skill. The subsequent obliteration of the work, which the veterans’ hospital does not claim direct responsibility for, may or may not have been part of the artist’s “political statement," not unlike Ai Weiwei’s porcelain sunflower seeds being cordoned off: force the hand of the powers-that-be without revealing your own hand. Reveal the infrastructure of the prevailing structure by subverting it after it’s taken you in. It’s clever and risky, but in Blu’s case, it’s weirdly amateurish. Instead of dollar bills and caskets, he could have spewed titanic, foul epithets across the wall. They would have had the same level of intellect. Let it be noted that Blu is also from Italy, and not from the nation he’s criticizing by displaying this work, but I’m not about to start deciding what might be anti-American based on someone’s nationality.

It might be an unpopular opinion, but I’m pretty thrilled that white paint struck a blow against praising a giant, abjectly mediocre mural about an old, tired idea in the least respectful place it could have possibly been created. If you’re an artist who works in the public space, you need to consider all of the elements that surround your venue and design to accommodate that. If you choose not to embrace this level of consciousness, you’re just a loud jackass. MOCA chose to cover the mural for a number of reasons (mostly concerning respect and decorum), and invited Blu back to create another one. Next time, stick with your strengths and just draw a big, goofy face.