Mother’s Day, after nearly a century, retains its innocence. 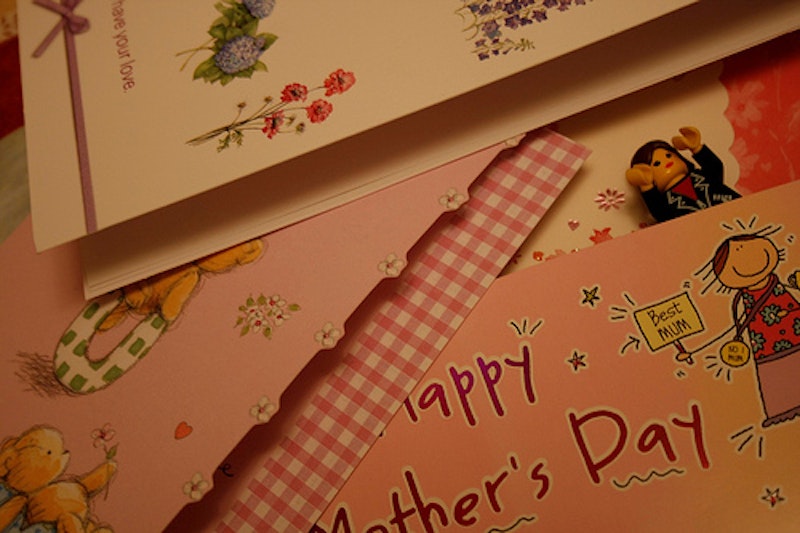 One evening during the Christmas season of 1990, my wife and I spent several hours gabbing with my late brother Doug in a snazzy bar at Bangkok’s opulent Oriental Hotel. We were awaiting the arrival of 10 or so other members of the extended family, flying in from Kyoto, and after a fairly quick rip ‘n read discussion of world politics—this was just before the first Gulf War, and my brother, a Boomer academic liberal, and I agreed on nothing at all—we sensibly moved on to less provocative topics. At the time, Doug was anticipating with great pleasure the birth of his second daughter, coming up in a few months, and he proposed that January 2 ought to be declared International Children’s Day.

I found this quite daft, even after several rounds of dark rum cocktails, but did marvel at his vexing, and often charming, ability to stir up debates over what, at first blush, were quite mundane subjects. Actually, I was glad to talk about this notion instead of his insistence that the first President Bush was an outlaw who’d murder innocent people for the sake of oil, and offered the opinion, playing to his dislike of excess commercialism, that the last thing we needed was another holiday. Verbal jousting with Doug was a sport and almost always a lot of fun.

In truth, holidays are fine by me, especially those that fall on Sunday since there’s no delivery of mail anyway (although I do wonder if, say, in 10 years, the U.S. Postal System will largely be a relic of the past). Yesterday was Mother’s Day of course—derided as some as a Hallmark bonanza, although President Wilson declared it an official holiday in 1914—and as is usually the case our family had a lovely time, attending an Orioles-Yankees game at Camden Yards, lazing away the morning and taking stock of sunburns at night. (It was a large crowd, notable both for the police presence—I’ve no idea why—and the foam syringes that were raised in the air when A-Rod came to the plate. Why O’s manager lifted his best starter Koji Uehara after six innings and less than 100 pitches—just one run allowed—was a mystery to everyone in our section, and became worse when the Baltimore bullpen coughed up the game for a 5-3 Yanks win.)

As my wife was reading the New York Times Magazine early on, a local television station had a live broadcast from a popular breakfast joint, and the reporter traipsed around the packed room and asked the various moms about their plans for the day. One middle-aged lady said she was going to pass several hours reading the poetry of Gerard Manley Hopkins, which struck me as sort of depressing, although perhaps preferable to an afternoon of pulling weeds from the yards, as one mother of five outlined in her docket for the day.

Yet Mother’s Day is a non-judgmental affair, a glorious occasion really, and one of the few markers of the year in which I don’t feel at all melancholy (unlike Christmas or Thanksgiving) thinking about my own mother, who passed away in 1983. It’s just not possible, as I recall those May Sundays from the 60s when she’d wake up beaming, and every year she’d proclaim the batch of daffodils and a tulip here and there that my brothers and I plucked from our spotty garden as “the best bouquet yet!” My dad would smile at her tranquility, then trundle off for a half-day of work at his car wash, and on some of those nights we’d either order pizza—back when almost any pie ordered in New York City or Long Island was a guaranteed winner— and watch Perry Mason together, or, when a little bit flush, go out to Northport’s Waterside Inn for an Italian dinner. Every year it was a given that Mom would receive a box of butter crunch candy from her boys, along with a few other modest gifts. In 1969, at the height of the Vietnam War, I gave her a small clay dove—as a good luck charm to ward off Huntington’s draft board from calling up one of my brothers—accompanied by a heartfelt yet dreadful poem.

Mother’s Day is also my wife’s favorite day of the year, and if that’s certainly not unique, it hardly dampens her enthusiasm, and our sometimes irascible teenagers are properly deferential and on their best behavior. Not so long ago, when the boys were toddlers, I’d spend the few days before painstakingly compiling a photo album comprised of pictures from the preceding 12 months, weeding out a pile of pictures, making sure that each boy was equally represented.

Now, as we’ve abandoned the camcorder that recorded the first steps and birthday parties of Little Precious I and II, there are also fewer photos to choose from, but my oldest son did put together a splendid collage of digital snaps, which was far more artistic than anything I could manage. Similarly, his younger brother worked on a hilarious ink drawing the week before while we watched ballgames at night, and my appreciation for their talents in this realm borders on awe, as I can’t even produce a simple stick drawing. Not really a surprise since their mom is a painter (who also illustrated my weekly “MUGGER” columns in New York Press), and the boys lucked out in that genetic wild card, just as they did in the looks department.

But hey, enough self-effacement here! I’m no slouch when it comes to picking out some imaginative presents, especially on Mother’s Day. There’s an exceptional thrift store in Baltimore’s Hampden neighborhood called Hampden Junque, where three or four times a year I pick out a few curios that, as the proprietor says every time as I lay down the dollars on the counter, “You ain’t gonna find this stuff at the mall!” Quite right, since most of the figurines bear the label “Made in Japan,” which dates them back to the 1950s, and if the items might be on the politically incorrect side, well, that just doesn’t concern me. After all, I’m a huge fan of the Cleveland Indians’ Chief Wahoo logo even if that’s a preference that isn’t wise to bring up in casual conversation.

Father’s Day is a swell occasion as well, but it pales next to Mother’s Day, which remains the most popular time of year for restaurants and phone calls. This all makes sense, as I think about my wife, and my mother so many years ago, as it’s a time when she can forget about the odd squabble between her sons, the out-of-nowhere impertinence common to teens, the crummy grade in biology, and pat herself on the back for a job well done—knock on wood and all seven rubs of a rabbit’s foot—and not feel bashful about being treated like a queen on a lovely Sunday.