Racism, sexism and homophobia are the norms in comic book culture. 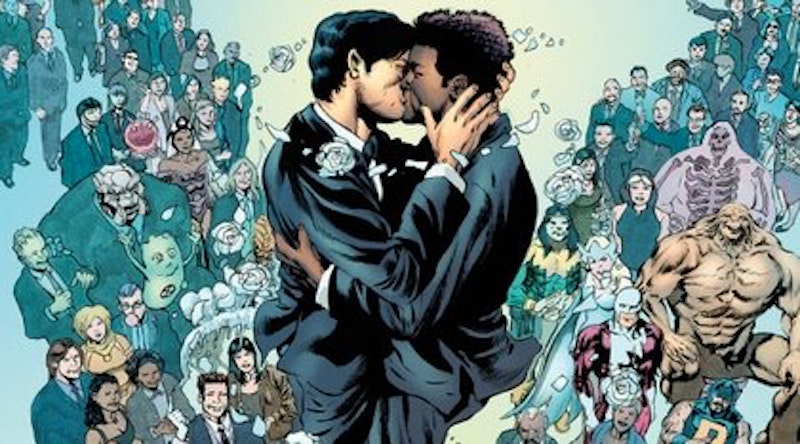 That comic books are traditionally a white dudes-only medium is a given. With an overwhelming number of heroes that are colorless and solidly heterosexual, it's a status quo that's hard to shake—especially when so many of those characters are treated as cultural icons that should be impervious to change. But that entire notion might be about to die out, and it can't come soon enough.

The comics world went topsy-turvy recently as Marvel announced a few radical changes for two of their most well-known characters. First came Thor, who will pass his hammer to a female version of the character in October; not long after, Marvel Entertainment Chief Creative Officer Joe Quesada stopped by The Colbert Report to announce that Sam Wilson, better known as Captain America's erstwhile friend The Falcon, will fill Cap's boots himself in November's All-New Captain America #1. Both changes were officially made to reach out to women and people of color, whose perspectives have long been missing from high-profile books in the industry.

There's a caveat to this upheaval: it's not bound to last very long. Bro-Thor is only out of the picture due to being deemed “unworthy” of wielding Mjolnir; Steve Rogers can't be Cap because he's recently aged 65 years (getting the super-soldier serum sucked out of your body will do that to a guy). Neither of these dilemmas is even mildly permanent in comics, a medium in which death itself has a legendarily temporary effect.

I'm still excited, though. Even if the changes aren't going to stick around for more than a year, introducing some diversity into big-name characters is a great thing for the glaringly one-note industry. But not every fan agrees with me—in fact, some are disgusted by Marvel's “pandering.” Twitter exploded after each announcement, with one fan hollering “that's not Captain America, that's [a] black fool in his jumpsuit!”

Racism aside, there’s a good reason for Marvel to invest in high-profile characters that appeal to people without pale penises. ComicsBeat.com reported a few months ago that women could make up more than 46 percent of the medium’s fans; why would any respectable business ignore close to half of their potential readers? There aren’t such solid numbers on the racial breakdown of comic fans, but the popularity of figures like culture writer David Brothers and comics rapper Eugene “Adam WarRock” Ahn proves that people of color are a much bigger part of comics fandom than they’ve been credited with in the past.

Marvel’s no stranger to controversies like these. Gay superhero Northstar married his boyfriend a few years ago, raising the hackles of every homophobic pop culture aficionado from New York to Alabama. But Quesada, along with Marvel EiC Axel Alonso, seems to be just fine with courting controversy. Every headline the company grabs is worth another few bucks at the box office or comic shop, and that’s what really matters to a corporation like Marvel. Fans ought to recognize that the mass-media companies are less caretakers of some collective-unconscious “childhood,” and more entities that are solely concerned with making a profit. This goes for those who would rather see a new female/POC character in the spotlight, rather than a legacy version of an old character. A brand-new character is a risk; even if he or she is written and drawn well, there’s no guarantee that the company will make money on the property. Asking companies to take a loss in the name of progressivism just isn’t realistic, especially when corporations like Disney and Time Warner own them.

While all this has been happening, DC Comics is still struggling to play catch-up with Marvel on the diversity front. Their status as the Establishment is firmly cemented. There’s good reason for that, too: before they can worry about including diverse characters in their books, DC needs to make their line fun to read again. The past decade has seen the company’s storylines slide rapidly into a morass of depression and mindless violence, beginning around the murder-and-rape-fueled Identity Crisis storyline and continuing through today’s slasher-flick Batman comics. When your brand becomes associated with chronic dismemberment instead of acts of heroism, you’re doing superheroes wrong.

Still, there’s a sunrise over the horizon for DC if they’re willing to stop running away from it. With this month’s announcement of a new creative team and direction for the Batgirl title, in which Barbara Gordon will travel to a new locale to protect her youthful peers and leave behind her traumatic last 34 issues, DC has shown they’re willing to try a lighthearted approach again—another thing fans have been clamoring for. Some fans still resent DC for not doing everything at once (this was a perfect chance to bring back Asian-American Batgirl Cassandra Cain), but there’s nothing wrong with small steps. The “Big Two” publishers are showing signs that they understand what our 21st century world looks like, and that can only lead to good things in and out of the superhero genre.