Yeah, you read that right. 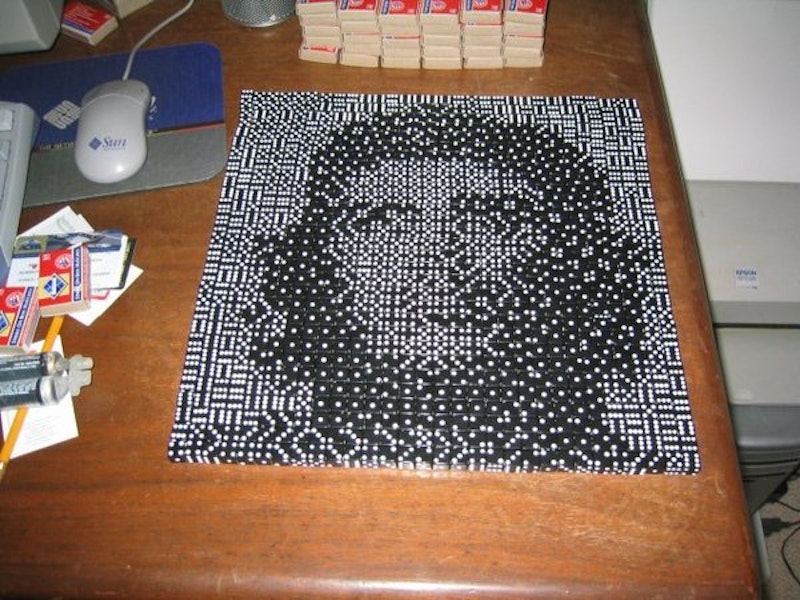 On April 28th, Make Magazine posted an image by artist and software engineer Ari Krupnik, a man who makes assembled images out of everyday objects, pixel-style. Make chose to post an image of Che Guevara, made out of black dice. Krupnik creates banjo players, celebrities, birds, airplanes, and other iconic imagery using these assemblage techniques—but when it comes to Guevara, the perpetually irate populace of the Internet had a tantrum.

It's inherently controversial when an artist chooses a historical figure who is alternately reviled and revered as a subject. While the politics of any political personality are intertwined, one needs to examine the relationship between the politics and the art itself before they have a knee-jerk reaction to the figure. There are associations, but they are made to be subverted.

"Wth? why would someone put that kind of time into that murderous slime bag?"

"I might just ban MAKE: if this keeps up... Why would they even Post this? Since when does making cool things become political?"

"So bittersweet. Doing something cool but ruining it by celebrating a monster."

To create an image of a person is not akin to worshipping or glorifying them in any way, but making something tangible is absolutely a concrete way to create a visual commentary. Instead of arguing that Guevara is one of history's most bloodthirsty and horrific murderers, have a look at the medium used to portray the man. Guevara is not carved in gold, or painted 100 feet high on the side of a building. Instead, he is constructed out of trinkets and household objects. If there is a political meaning at all behind this work, which was assembled on the artist's computer desk, it certainly isn't to glorify the subject.

This particular image of Guevara is one of the most iconic, recognizable ones in the universe of graphic design, right up there with Shepard Fairey's “OBEY.” This Guevara is so wildly overused that it's become impotent, like a cheap corporate logo, and many of the people who actively wear this image on t-shirts and hang it on posters above their dorm room bed don't understand the full politics, cheapening it to a disposable commodity. Because of its omnipresence, the image itself is an excellent one to use as obviously derivative image, a clear reference to a familiar icon which has overwhelmed its meaning. It's a stretch to believe that the artist chose this image for any other reason than recognizability—not because making Che Guevara out of dice elevates him to the status of demigod.

I'm not a fan of Guevara, but I do like dice a whole lot.