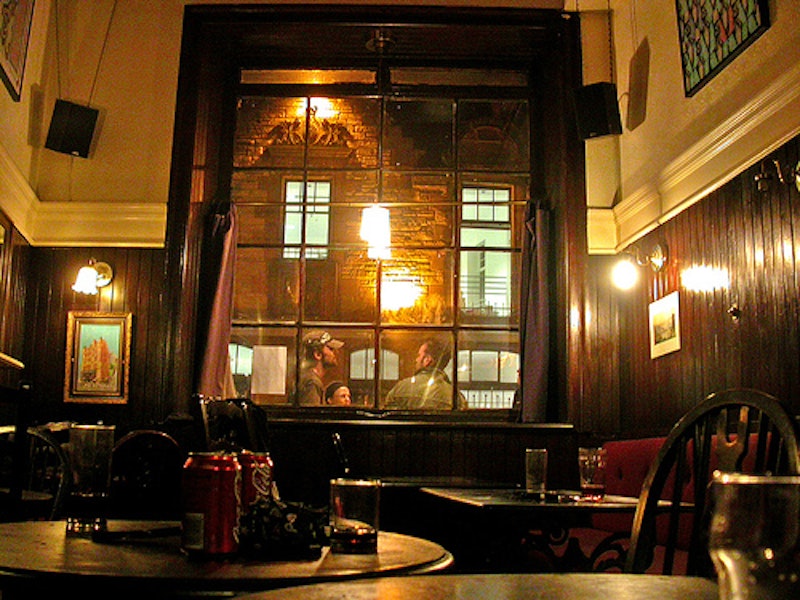 It was almost impossible last year to get into the Brown Jug, a bar right next to the University of Michigan’s campus. The line was wrapped around the block by midnight every Thursday, Friday, and Saturday nights (and even the occasional Tuesday). During the last weeks of school, you needed to be at the bar by 9:30 or 10 every night just to ensure you could have your own corner to stand, down sugary drinks, and take in a lot of second– or first-hand smoke. Last Thursday, I walked in at 12:15 and there was no line. Inside, the front half of the bar was about 70 percent full and the back was completely empty. This is the last weekend of classes for the University of Michigan, not some random freezing weekend in the midst of midterms.

About 50 feet away, on the same stretch of South University Ave., there was a line halfway around the block to get into Good Time Charley’s. A year ago, Charley’s was the “Backup Jug,” and a line there only meant that you definitely weren’t getting into the Jug that night. In trying to understand this phenomenon over the past six months or so, I’ve been asking a lot of people why—especially in the surprisingly numerous times where I’ll suggest the Jug and someone will ask to go to Charley’s instead. Maybe it’s because the drinks are a little bit cheaper. But that’s not what I’ve found out. The answer has literally been the same every single time: smoking is banned inside Charley’s.

Right now, there is very probably someone sitting on a stoop somewhere in Michigan, looking out into the world, smoking a cigarette, and worrying a little bit about this. Smoking ban. Once those words have been uttered, there is no un-saying them. There are states where those words don’t stick, but once a state starts talking your bars can go from smoky to smoke-free just like that.

I know this haunting, nagging fatalism because at one point in my life, I was a smoker. I remember with horror the first time I saw those words floated in print, a Baltimore Sun story mentioning a possible ban in Baltimore City. The ban became real, and then it extended statewide across Maryland. As a student in Michigan, I watched from afar as late nights at the diner sucking down Cokes and smokes abruptly became a thing of the past.

My relationship with government paternalism when it comes to public health is a tortured one. I’ve gone on record supporting the almost comically unpopular soda tax (don’t worry, more on this in a moment) but also believe that all drugs should be legalized. The now-un-proposed tax on sodas—like the actual tax on cigarettes—is a disincentive aimed at reducing the use of a harmful substance. Now, this definition of “harmful” is the troubling aspect of the situation but if you don’t believe soda to be harmful, then of course you won’t support any regulation. Even cigarettes have their boosters.

Taxes, though, do work in curbing tobacco use. In a Journal of Public Health Policy article, David Austin and David Altman estimate that a one-dollar-per-pack price increase in 1999 lowered cigarette consumption by between 15 and 38 percent. Likewise, if you compare tax rates to cigarette usage (the best way to do this is go state by state using CDC state comparison charts, you can see that higher taxes almost invariably lead to lower smoking rates. In general, smoking rates have fallen precipitously across the country in the last decade, something that could be attributed to better education, new taxes, changing health and cultural norms, or some combination thereof. Honestly, the combination of a price increase, feeling unhealthy all the time, and the fact that smoking was much more taboo with my friends in Ann Arbor than those in Maryland made it much easier for me to quit.

So, what’s the difference between a tax and ban on smoking in bars? Well, the two certainly are methods to achieve the same basic end, government-encouraged smoking cessation, but the paths are fundamentally different in their approach, and it’s the smoking ban’s approach that leaves a nasty taste in my mouth.

Assuming a cigarette tax’s primary goal is public health, the secondary goal is generating government revenue. It’s straightforward. Now, the secondary goal for a smoking ban in bars is… is what? Smoking bans can negatively affect tax revenues and tamper down bar and restaurant production. There’s even been a researched link between the smoking ban and drunk driving, a negative health risk to be sure, as people cross state or city lines for the freedom to smoke and drink at the same establishment (though this would obviously be eliminated by a universal ban).

Because most of the smoking bans are new, there isn’t much evidence one or way or the other about the influence they have on smoking rates or long-term public health. Yet, we already have proven methods of reducing consumption, taxes and education, that are severely less invasive. Taxes do not take anything away from you aside from money. It leaves the decision to you, even if it is trying to nudge you in a certain direction.

Contrast this to the government imposing its will on private property. In New York City, you are technically not allowed to smoke outside, though this is hardly, if ever, enforced. The government there has laid claim to the air, it has laid claim to what you legally do in your home, and laid claim to what legal activities business owners can allow in their establishment. I can maybe buy the second-hand smoke argument in a ban on workplace smoking, as you have no individual decision in picking your environment, but there is no justification for this in a bar. When you apply to work at a bar, you will instantly know from the second you walk in that you may be in an environment with or without smoke. If you don’t like smoke, walk out of the bar, don’t apply for a job, don’t stop for a drink, or ask your friends if you can go somewhere else. If you think smokers will win the argument every time and force their unwilling friends to bask in secondhand smoke, ask Charley’s owners how business has been.

If the government really needs to get involved to jump start things, why not make licenses, a la liquor licenses, that bars can apply and pay for allowing them to permit smoking. That way the government is generating cash, it isn’t totally overstepping the bounds of a free market, and it can accommodate smoker-heavy cities where smoke-free bars may have a tougher time attracting customers. As far as worst case scenarios go, I think I could live with that.

No one is saying you should be able to smoke in operating rooms again—all that I’m asking is that we allow people to smoke in a bar or maybe even, God forbid, a well-ventilated, sectioned-off portion of a restaurant.