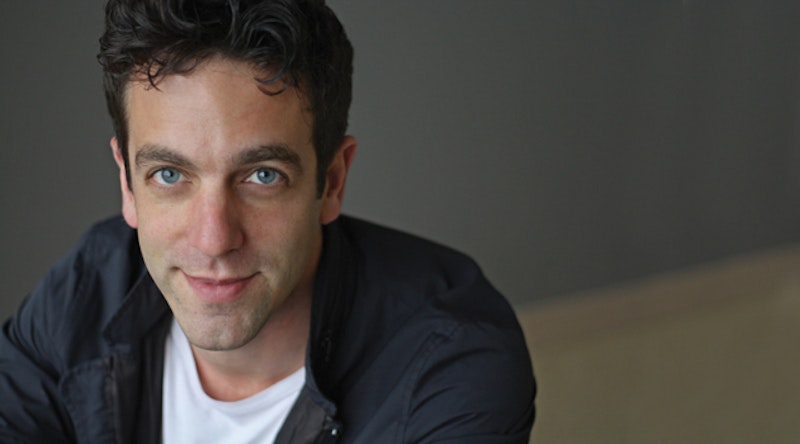 B.J. Novak’s first book, One More Thing: Stories and Other Stories, is not a ghostwritten autobio, or a 200-page piece of stand up schtick. This is not some dumb or navel-gazing actor writing a book just because he can. Novak is best known for playing the unflappable intern Ryan on the American version of The Office, although most probably don’t know he was a writer on that show and had done standup for years. That doesn’t mean you can write good fiction. I read Samantha Bee’s I Know I Am, But What Are You? about four years ago, not expecting much, and getting exactly what I expected. Even if you’ve never watched The Office, you’d recognize Novak’s face: he’s been in lots of big movies, mostly as a character actor—Inglourious Basterds, The Smurfs, Saving Mr. Banks, The Dictator.

I had no expectations for Novak’s book, but was blown away by how good these stories are. There’re dozens and dozens of them in the book, some a couple lines, a few pages, and a handful of longer ones like “Sophia,” about a man who falls in love with a sex robot that becomes sentient (sucks to be beaten to the punch by Her, especially since Novak’s story is way better than rubber sap). Novak’s voice, logic, and the construction of his stories is an alloy of the sensibilities of David Foster Wallace and Dave Eggers, leaning heavily Eggers. But on Bret Easton Ellis’ podcast, he admitted reading “the cruise ship essay” (“A Supposedly Fun Thing I’ll Never Do Again”) in high school and going nuts. These stories combine a mainstream comedic sensibility with the tongue-in-cheek logic games of both Daves: what if an impatient billionaire built a full size mirror for Earth? Taking old saws like “if I had a nickel for every time...” or why walking on the moon would be a waste of time, and working through them, over-explaining like DFW, conjuring disturbing sketches of unreliable, oblivious narrators, like the butt-stupid bro who assaults an astronomer demanding to know what dark matter is, only to zone out during his involved explanation.

Novak leans toward the light and the optimistic, and some of the stories are sullied by The More You Know-type endings that verge on preachy, but they’re mostly just out of place tonally and they sabotage perfectly clever stories that didn’t need any spelling out. The best example is the end of “Great Writers Steal,” a page-long riff on two writers who’ve taken that idiom literally and are psyching each other up like they’re about to sneak past lasers in the Louvre.

But everything in this collection is concise and far more entertaining than DFW and Eggers at their most self-indulgent and baggy. On a “literary” level, One More Thing could hold its own against most contemporary American fiction. Novak’s work in the film industry and his experience as a writer leads to amazing pieces like “The Comedy Central Roast of Nelson Mandela,” where he expertly mimics the personalities and atmosphere of that shitshow, or “Chris Hansen at the Justin Bieber Concert,” where the famous host of To Catch a Predator is driven insane by how he’s expected to behave at a Bieber show, where all the pedophiles will see him and look away and act nervous, so how is he supposed to enjoy the show and not do his job now that he knows where all the pedophiles in the crowd are? And what exactly is he doing there? Novak just nails these super specific character types, like “The Girl Who Gives Great Advice” (“what does your heart tell you?”), or “Just an Idea,” a fuck-you to the art world and placing great meaning and value around arbitrarily. Novak is genuinely touching just as often as his earnestness is deflating: “The Most Beautiful Girl in the Book Store” is a wonderful piece, thematically related to “Dark Matter” in its parody of ADD Millennials who act and think like children. And many of his endings punch you in the face (“Walking on Eggshells, or: “How I Fell in Love with Tony Robbins,” “The Ghost of Mark Twain,” “The Rematch”). One More Thing is flawed but fairly spectacular for something that came out of nowhere. Novak combines the absurdist puzzles and scenarios of DFW and the bleeding heart, wet-eyed sentimentality and lust for empathy of Eggers, with a refreshing brevity and sharpness. This isn’t just a successful lark; Novak’s a very good writer.