Art Spiegelman Speaks for You 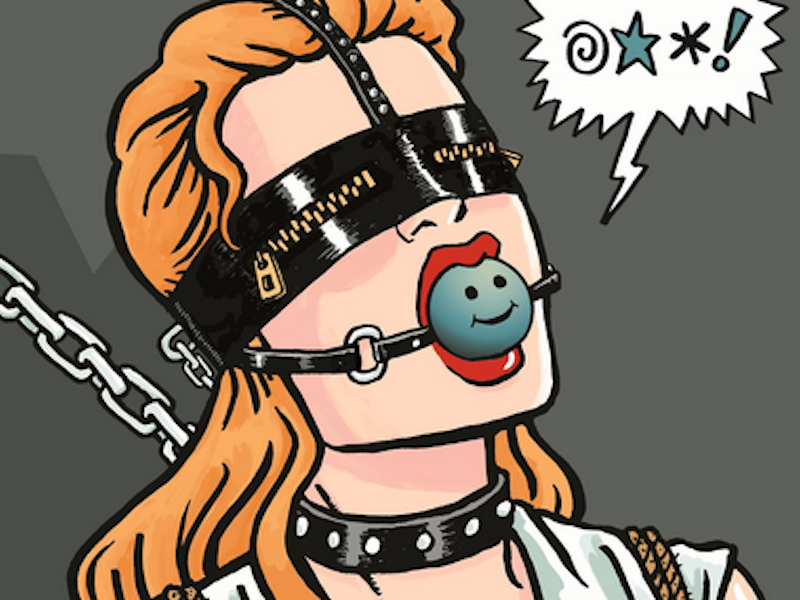 Women's bodies are dangerous, exciting, and transgressive. Showing them is exciting and sexy, and a punch in the nose to all the Puritans. Sex makes you free, man, so read D.H. Lawrence, look at an R. Crumb drawing of meaty hindquarters, and pat yourself on the back for leaving all the squares in the boring non-sexy dust.

That appears to be the anti-censorship, pro-cool-kid logic of Art Spiegelman's proposed cover for The New Statesman's "Saying the Unsayable" special issue edited by Neil Gaiman and Amanda Palmer. The cover was rejected for somewhat complicated reasons, but that only makes it more apropos, scandalous, and righteous. The image shows a woman in bondage ropes and chains, her eyes covered with a leather blindfold, a ball gag with a smiley face in her mouth. She shouts an expletive (probably "fuck!") that’s replaced with comic book curse symbols.

The cover is saying the unsayable in a number of ways. First, the image of a bound woman is supposed to be transgressive; Spiegelman has talked about how much he hates political correctness, so this is surely a conscious dig at feminists.

The woman also is gagged; so she can't speak. Yet nonetheless, she (or the smiley ball gag?) manages to shout—though that shout itself is bowdlerized.

If you were generous, you could see this as a playful, largely harmless, if mildly irritating, allegory of comics. The woman here is tied up, restrained, forced into silence by censorious jerks on the left and extremist jihadists on the right. Yet, even restrained and attacked, she manages to speak in the inimitable language of comics—smiley face, speech bubble and all. Spiegelman, that winking genius, declares, using his playful mastery of comic form, that comics will not be silenced. No matter how muffled, the picture speaks. Yay.

But when the picture speaks, what about the woman? Again, part of what the picture says is that sexy women are transgressive, and that tied-up sexy women are even more transgressive. If the image is a thumb in the eye to the PC police, you could see, perhaps, those feminist PC police as the ones who are getting tied up and silenced. The woman in the image is shut up; she can't criticize Art any more. Instead, she must speak with his voice. Rather than saying what she wants in her own words (like, "Get me out of this stupid cover, you boring hack") she speaks only with her body. And what that body says, in its charmingly mute ideographs, is "fuck"—a silent symbol of sex and transgression.

Spiegelman's free speech absolutism is expressed as an ostentatiously sadistic dream of substituting his voice for women's—or, more, as the dream that women's bodies speak, not with their own voices, but with his. Freedom to say anything means the freedom to repeat boring tropes of transgression, and to turn women into the same old speaking bodies as ever. To say the unsayable is to dramatize one's own virile self-vaunting. And if there's a women's inarticulate cry of pleasure or pain in the background, so much the better.