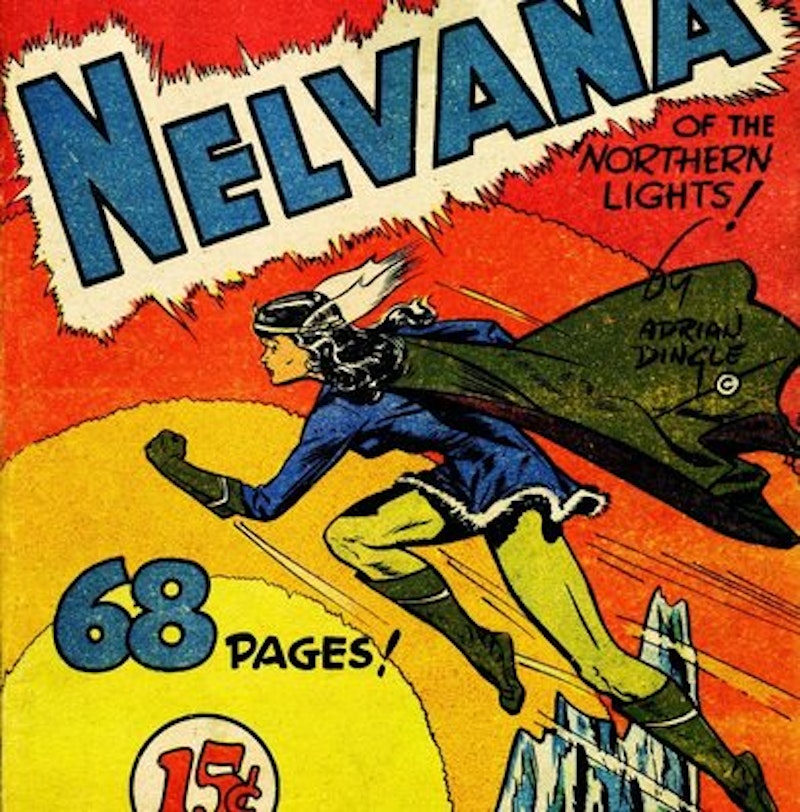 There exists a comic book about a spirit in a cape and short skirt who flies about accompanied by a Great Dane. The spirit protects her people, the Inuit, from a giant yeti, an ice beam and evil marauders in submarines. Her name is Nelvana and she has some figure; for an Inuit, as one scholar has noted, she looks a lot like Hedy Lamarr. But her name is taken from Inuit legend, and she was invented, written and drawn by a Canadian borrowing from the indigenous peoples of his much overlooked nation. Her adventures have now been collected in a nicely designed book called Nelvana of the Northern Lights. A minority female superbeing, and one created by a Canadian, ought to ring some sort of politically enlightened bell. Nelvana doesn't really. She's just one of those odd things that get hurled into life because of the comic book industry's eternal flailing about in search of a profit.

Nelvana the superhero came to birth when Canada was fighting World War II and the government decided to keep Canadian dimes from leaving the country. With American comic books banned, enterprising artists and writers saw the chance to move some product. One result was the character Johnny Canuck, whose adventures were literally traced from those of Flash Gordon. Nelvana is several cuts above him. Her creator, Adrian Dingle, was trained as a fine artist, and he earned his living as an illustrator and portrait painter long after his comics biz faded away. The man could draw and he could lay out a page. The greatest pleasures available in Nelvana are the brief, by-the-way shots of incidental players (a blunt-nosed submarine commander sighting the heroine in flight, an Inuk standing beside his igloo as a plane passes by) and the story's deft movement from picture to picture. Comic books of the 1940s went in for crowded pages and ill-sorted panels; thick-bordered squares and rectangles would jostle circles and pie wedges, with fat arrows directing the traffic as necessary. Dingle took that idiom and made it smooth, or at least pleasant instead of painful. He knew how to make images synch, and how to shift between close-up, medium shot and long shot to keep the eye happy.

But Dingle's art declined as he pumped out issues, and he made matters worse by inking with a tar brush. Nor was he all that great at writing, or at sticking to a plot from issue to issue. Nelvana herself drops from sight at least once, giving place to a rumbustious pair of scrappers named Bill Speers and “Spud” Judwin. These deal with a Japanese plot to turn the Eskimos—we would say Inuit—“against the white man.” Nelvana reappears, minus Great Dane, in Nortonville, Ontario, perhaps the most closely identified fictional burg any superhero has ever inhabited. There the gal with the strange name and odd clothing is discovered by patrolman Michael O'Donnelly. “Bejabbers,” the copper says, “but m'thinks I'd baiter escort ye home t'th' missus—'tis a sure case of amnesia ye're havin'.”

By this point the end was near. World War II was drawing down, and American product was on its way across the border. Nelvana branched out from her special Inuit responsibilities to become a special agent of the Mounties. Yet, even as her premise began to drift, other elements remained stuck. Her Mountie work involved Nelvana in a battle against the Queen of Statica, who had powers that involved radio. Pre-Mounties Nelvana had battled the rulers of Glacia, a kingdom of ice. When it comes to imagination, the series shot its bolt with the flying Great Dane. The rest was just playing out a string.