All Roads Lead to Springfield

We're all sick of actual politicians, so here's a roundup of the last two years' campaign in Simpsons clip reel form. 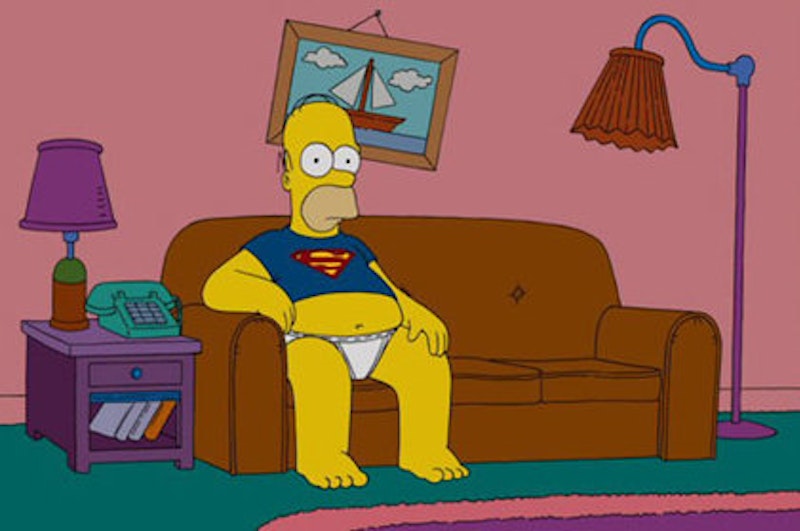 With Election Day upon us, let’s take this opportunity to review some of the major themes and issues that have followed us through this long and tumultuous campaign season. Since I’m sure we’re all tired of hearing the candidates rehash their talking points, I’ll leave it to The Simpsons to help us review the life and times of politics in 2008. Bake it away toys!

Mudslinging
There was certainly no shortage of political attacks this election cycle. From countless TV ads deriding their opponent’s experience and expertise, to outright character defamation at rallies and stump speeches across the nation, both candidates really came out swinging this year. Obama’s been dubbed a celebrity, a Muslim, a terrorist and a socialist all in less than a year’s time. Fingers crossed that his next title is President of the United States.

In the Season Two episode “Two Cars in Every Garage and Three Eyes on Every Fish” Mr. Burns’ runs for governor so that he can change the law on nuclear power safety violations and avoid paying the $56 million it will cost him to bring his plant up to code. Here, he assembles his campaign team and learns what it will take to beat the incumbent, Mary Bailey.


The American Worker
Joe the Plumber, Tito the Builder--this was the year of the hardworking schmoe.  It’s nothing new for candidates to play up the importance of the American Worker, but this campaign really brought the “average American” into a much brighter spotlight. McCain claimed that in saying “the foundations of our economy are strong” he meant that our workers are the best in the world. Both candidates have addressed this subset of Americans directly, telling them exactly how they’ll help protect the things that matter most to working Americans. Things like maintaining jobs, protecting our nation, and helping citizens provide for their families’ needs.

In Season Four’s “Last Exit to Springfield” Homer the Safety Inspector becomes president of the Power Plant’s union and fights to protect the needs of his fellow workers.


Voter Fraud
ACORN, disenfranchisement and voter suppression have been all over the news in the weeks leading up to Election Day. I don’t have anything snarky to add because voter fraud and voting rights are serious things. Let’s hope every registered voter gets to cast a vote and that each vote counts, once.

In one of the best episodes in the show’s history, Season Six’s “Sideshow Bob Roberts” finds Sideshow Bob released from prison and nominated as the Republican candidate for Springfield’s mayoral election. Bob’s natural charisma and attack against Mayor Quimby’s revolving door prisons—“he even released Sideshow Bob, a man twice convicted of attempted murder. Can you trust a man like Quimby? Vote Sideshow Bob.”—lead to a landslide victory. But thanks to an anonymous tipster, Bart and Lisa discover that most of Bob’s “supporters” are housed in Springfield’s cemetery.


Patriotism
There was Rep. Michele Bachmann who said “I wish the American media would take a great look at the views of the people in Congress and find out, are they pro-America or anti-America.” There was the McCain campaign’s insistence on emphasizing “Real America,” some ridiculous conglomerate of various parts of states where the vote goes in the Republican’s favor. Not since the dubbing of Freedom Fries have we seen so much attention placed on good old-fashion patriotism.

In Season Six “Bart vs Australia,” Bart poses as a representative of the International Drainage Commission, calling collect to learn which direction the toilets drain Down Under. When Bart refuses to pay for the cost of the call, he is indicted for fraud and the Simpsons travel to Australia where Bart is ordered to publicly apologize. While staying at the U.S. Embassy, the family is reminded of what makes America the best damn nation in the world.


Proposition 8
Probably the most talked about ballot initiative, California’s Proposition 8, an amendment to ban same-sex marriage, has received a lot of last minute media attention as both sides made big campaign pushes in the days leading up to the election. Both candidates have stated that they do not support gay marriage, citing that traditional marriage is meant for a man and a woman. If I spend any more time rolling my eyes at the phrase “traditional marriage” they’ll surely pop right out of my head. A big shout out to any Californians who voted for equality, and against Prop 8 today!

In Season Eight’s “Homer’s Phobia” Homer attempts to distance himself from the family friend, John, when he learns that the antiques dealer is a homosexual. Fearing that John will have a negative influence on young Bart, Homer tries to teach his son what real American men are like.


The Bailout
The economy has been the talk of the campaign in these last few months. The bailout that the government convinced everyone we so desperately needed and that John McCain suspended his campaign to get just right, has left many Americans feeling cold and distrusting of our government’s legislative process.

Season Six’s “Bart’s Comet” puts the town of Springfield in danger when Bart discovers a comet that is hurtling towards Earth. The citizens of Springfield must turn to the federal government to help protect them from impending doom.


The Change We Need
What’s a campaign season without a catchy slogan? Obama has invigorated American voters with his talk of change and message of hope. After four years of abysmal policies and ineptitude under George W. Bush, many of us are hoping that this election brings us the change we need, not more of the same. Did I leave out any Obama catch phrases?

After Homer’s attitude toward the garbage man gets the Simpsons trash service suspended, Marge forges his signature on a letter of apology to the Sanitation Commissioner. Refusing to let the fake apology stand, Homer starts a fight with Sanitation Commissioner Ray Patterson that ultimately leads to Homer running against the longtime public servant in the next race for office. Despite his total lack of experience Homer captivates voters with his promise of a better future in Season Nine’s “Trash of the Titans.”


The Bradley Effect
Despite Obama’s substantial lead in the polls, Democrats remain apprehensive about an Obama victory. Will the enthusiasm Obama’s supporters have shown throughout this campaign translate to actual votes on Election Day? Will people’s racial biases rear their ugly heads in the privacy of the voting booths? I know I for one won’t be able to relax until the winner’s name is announced and that name is Obama.