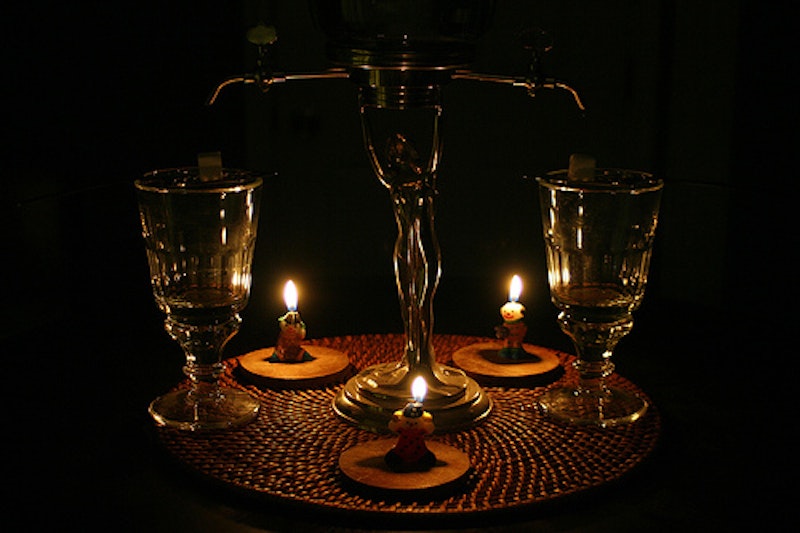 Three college students from the University of Minnesota, Moorhead set out last night to achieve what is colloquially known as "chasing the green fairy." A phrase made famous in modern Europe, it describes the process of consuming the alcoholic beverage absinthe until one achieves a hallucinogenic experience.

"Yeah, like Hemingway, and like Van Gogh and stuff, they would just sit at cafes all day and drink absinthe. And it made them crazy but in like this brilliant way," Tyson Hartford, a sophomore, explained.

"What's important," his roommate, Gil Johnson, said, "is the wormwood. I looked this up on Wikipedia. Wormwood was illegal for a long time because they thought it made these crazy geniuses like too crazy for pent-up society to deal with. They just weren't ready for it. But now, it's legal in the states. Probably 'cause Obama knows what's what."

The roommates bought a bottle of Absente, a particular brand of wormwood-containing absinthe, and each made sure his Moleskine notebook was on hand, in case any particularly mystical, tortured or European thoughts should befall them while under the influence.

Unfortunately, that was not to be the case. After taking four shots each of the 120 proof liquor, the boys were seen visiting a vending machine close to their dorm room.

“I wouldn’t say that they were on the cusp of any kind of substance-induced revelation,” Carol Jenkins, another University student who was playing checkers in the common room at the time, observed. “They just kept talking about how they really wanted some Frutopia.”

"I didn't hallucinate at all," Hartford explained. "There was no green fairy. I didn't even see one single aura on anyone in our residence hall."

"I threw up," Johnson reported. "And when I woke up my notebook was full of all these scribblings about different ice cream metaphors for sex. And while that's kind of cool, it's not going to help me write the next For Whom the Bell Tolls, ya know?"

"To be honest, I don't remember anything other than desegregating some chocolate and vanilla Teddy Grahams into one big pile and then eating them," Hartford admitted, "Plus, the absinthe was gross. It tasted like Springerle cookies."

Johnson, despite this experience, still believes that absinthe can be used to find his inner muse, if approached correctly. "We did drink a lot of beer too. And some gin," he pointed out, scratching his head. "And we didn't light sugar cubes on fire like that forum told us to. So, there's always next time."

According to statistics, roughly 20 percent of college students will try absinthe this year. Absinthe marketers have high hopes that the presence of the newly legal spirit will appeal to the same demographics that consume illegal substances in hopes of testing the limits of their own perception.

“We’re doing these kids a favor,” Absente marketer John Clearwater explained. “These are the kind of kids who are going to eat a handful of boomers in the forest and then talk about seeing their spirit animal. Do absinthe instead, kids. It’s legal, and you’ll sound like less of a douchebag.”