How do we come to policy decisions about issues that stir people’s most elemental emotions? 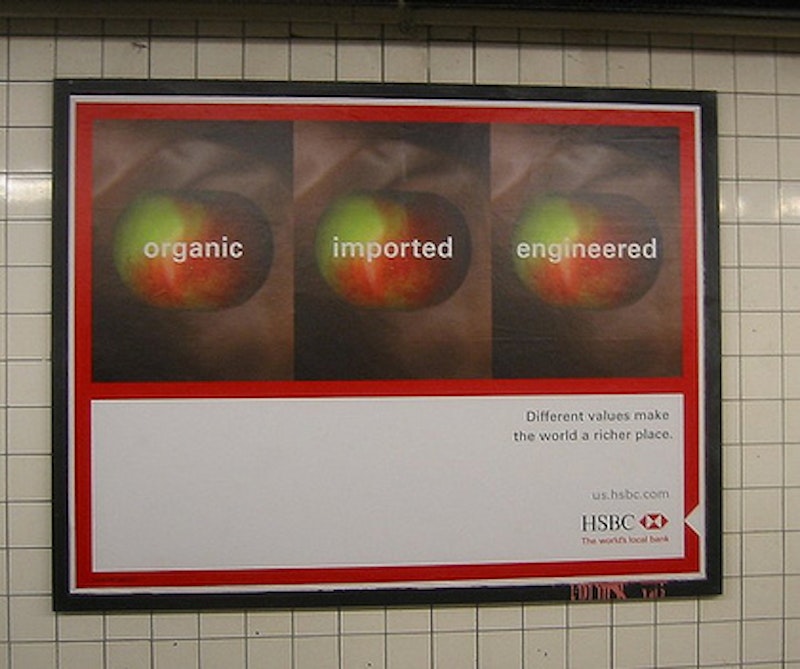 By now you’ve probably seen HSBC’s “Different Values” campaign, which takes copies of the same image and superimposes over each one a word that describes an interpretation of the image. Often, the interpretations contradict each other. As my train slowed to a halt last night, I noticed one of the new HSBC posters. It showed a plastic bride and groom atop a wedding cake, alternately labelled “fate,” “fear” and “fairytale.” The slogan for this campaign is “different values make the world a richer place.”

“Richer” has at least two meanings. The economy being what it is, no one is getting any richer in a financial sense, no matter how different their values. Anyway, that interpretation of the slogan is less thought-provoking than the alternative.

The other interpretation of “richer” is, of course, “more diverse,” or “more enjoyable.” To a certain extent, the slogan is true. Just as two heads are better than one, two worldviews (or more) are better than one. Thinking about a problem from multiple angles often yields the best solution, and the presence of multiple voices stops any one voice from becoming too loud. When people don’t think critically or question the way they view the world, they become narrow-minded and entrenched in their views. When organizations or countries silence dissent and don’t re-examine their policies, the results can be disastrous. In other words, thinking critically, as well as broadly, is critical.

I relish opportunities to interact with people who disagree with me. It can be frustrating, upsetting and also uncomfortable. After all, wouldn’t life be easier if everyone agreed with us, if no one ever beat us in a debate, and if no one ever forced us to explain our point of view? But among the most fascinating and eye-opening conversations I’ve ever had have been with people who don’t agree with me, people who question my values, and who challenge me to justify them.

But it is values, those inexplicable moral guidelines that often bring these conversations to a dead halt. Values: they’re the rules by which you’ve been raised and the unwritten laws by which you live your life. And although HSBC promotes differences as making the world a richer place, the truth is that when it comes to values, our differences divide us at the deepest and most unchangeable levels. This is because values, like our religious beliefs, are profoundly personal and play a vital a role in shaping who we are as people. And like our religious beliefs, our values are the things on which we cannot be expected to compromise.

Imagine that you’re sitting around a table with some friends, talking about something uncontroversial like, oh, I don’t know, abortion. One person says, “I think it’s an awful thing to have to do, but I still think that a woman should be able to choose what happens to her body.” A second person asks, “Even when that choice involves ending a life?”

Conversation closed. Those two people aren’t ever going to agree on this issue, and why? It’s because of values.

Person number one, trying to convince her friend that life doesn’t begin at conception, and therefore abortion doesn’t end a life, can talk science until she’s blue in the face. It won’t change her friend’s mind. The other person’s view tells her that a fetus is a life. So for her, abortion isn’t just about a woman’s right to choose the direction of her life. It’s about that woman choosing the direction (and in some cases, the termination), of another life. In this case, different values don’t make the world a richer place. They are making the world the kind of place in which both parties around that hypothetical table feel like they’re banging their heads against a brick wall.

For those of us who enjoy stimulating, belief-challenging discussion, this kind of stalemate is an infuriating, but hardly monumental problem. It might be disappointing to discover that there are some arguments that can’t be won, no matter how well or wittily we present our case. But when those arguments occur, we simply agree to disagree, thank each other for an interesting dialogue, and go on our merry way.

But what happens when our job is to do more than just have an interesting conversation? What happens when our job is to reach conclusions, and to decide which set of values is best for a large group of people? I’m talking, of course, about making policy. As a new administration begins, it’s important to think, and to think critically, about how to go about making policy on these issues. How do we find national answers to questions that, apart from being personal, are also perceived in totally different by the various parties involved? When one side views an action as a difficult but justifiable choice and the other side views it as murder, how do we even begin to make policy?

In 2004, 52 percent of Americans were pro-choice, and since America is a democracy, abortion remains legal in most states. As a pro-choice feminist, I don’t object to that in the slightest. But I try to imagine how it would feel to be in the other 48 percent of the population, how it would feel to see my government violating my core values at the demand of a slim majority. When I do that, I realize that the current state of things is not acceptable. I don’t know what a better solution would look like, but we need to find one.