A Goddess Forged in Fire

The long, rough arc of X'Hal, goddess and guinnea pig of The Omega Men. 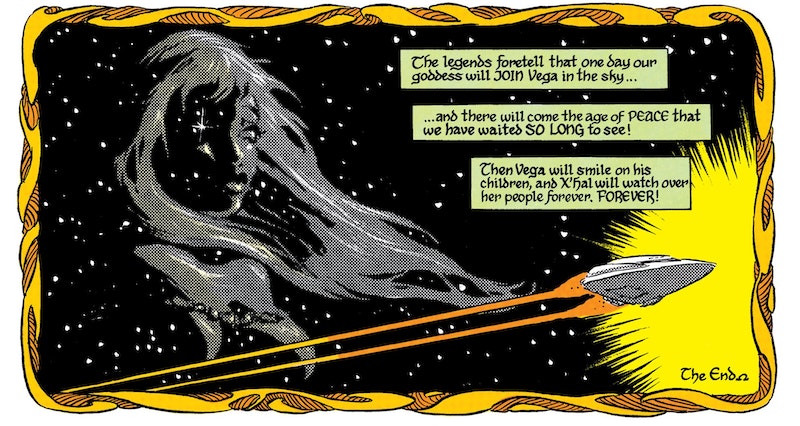 Before becoming holy a deity must preserve a sense of emotional security, the idea that immortal presence and safety are one and the same. X’Hal is an exception to this rule. The mercurial energy goddess was created by writer Marv Wolfman and artists George Perez and Romeo Tanghal. Her origin came to light in DC Comics’ New Teen Titans Annual  1 (1982). The goddess’ volatility and the unusual nature of the faith that grew around her were central plot points, but the wider emotional and psychological impacts of X’Hal were revealed mainly in a different 1980s DC series, The Omega Men.

The root of X’Hal’s difficult temperament comes from her connection to science. X’Hal began life as a mortal woman from the planet Okaara in the Vega star system. She became legendary for spearheading an uprising against the The Psion Empire, an advanced society of lizard people who enslave entire worlds and races for the purpose of scientific experimentation. Fascinated by her rebel spirit and committed to taking revenge against her insolence, the Psions kidnap X’Hal soon after launching a second, much more successful attack against Okaara. They torture and humiliate her into submission and then kill and re-animate her. The process alters X’Hal’s DNA causing her to become a volatile source of physical, mental, and spiritual energies. Inevitably her newfound power fuses with her iron will making her beyond the control of anyone or anything. Having already attained lofty status as a patriotic Vegan liberator, this public breakout from Psion control is then viewed as a rebellious miracle.

Thanks to Psion transgressions X’Hal becomes a revered goddess. Here themes from classic Marvel Comics rise to the fore; like the origin story of Marvel’s Black Power hero Luke Cage, torture and imprisonment create an anti-authoritarian icon. For several issues of Omega Men and in New Teen Titans Annual 1 X’Hal’s characterization remains predominantly benevolent. She appears as a shiny, glamorous, living supernova serendipitously working for good. A series of Psion bombings in NTTA 1 are thwarted by X’Hal’s perpetual power surge. In Omega Men 15 X’Hal’s son—the Omegan Auron—uses his genetic/spiritual link to the goddess to save the planet Euphorix from destruction.

By Omega Men 26 (under the guidance of writer Todd Klein and artist Shawn McManus) these super heroics are overshadowed as X’Hal slips into insanity, a reminder of her roots as a traumatized product of mad science. Her physical appearance becomes twisted and gloomy. No longer the radiant beauty from NTTA 1, her power-gorging ways turn her into a fiery, pock-marked, dirigible-dwarfing monster. Auron fares no better. He becomes a flying molten warrior with rippling muscles and a bloated ego matched only by his grotesque mother. Together X’Hal and son terrorize the universe destroying everything in sight. The religious unity created by the goddess is replaced by infectious dread.

In OM 35 the Omegan Primus/Artin crushes the rampage by scattering X’Hal’s physical form across the Vegan star system. The schizoid guerilla’s defensive strategy involves weaponizing an ancient Psion contraption previously used as a starship’s power source. The modest gizmo is called an Orlac device. It resembles a human heart crammed with tiny electric cables. It combines elements of complex engineering and mysterious energy conduction that are similar to the forces which gave X’Hal super powers. There’s poetic justice when the maniacal goddess is tranquilized by the same science that turned her into a hulking threat, but this isn’t what makes X’Hal remarkable.

From the moment of her resurrection she began to inhabit outer space where she rarely ever made direct personal contact with mortals. Consequently, most Vegans viewed her in the same way that Earth people view the Christian god. Long before Primus/Artin’s crafty attack, to Vegans X’Hal was everywhere in everything. Physically and conceptually the attack’s outcome gives the goddess a strange new omnipotence. By consciously asserting dominance over the immortal, Primus/Artin’s dematerialization of X’Hal is a form of blasphemy. Yet by abstaining from murder—by letting the goddess disperse as an endless living mass of scattered micro-particles—Primus/Artin helps her to become exactly what the Vegans need her to be. Invisibility brings X’Hal and her followers together forever.