Young At Heart, But With a Conservative Soul

It's a victory for political commentary in general if Ross Douthat becomes a more prominent conservative voice while at the Times. 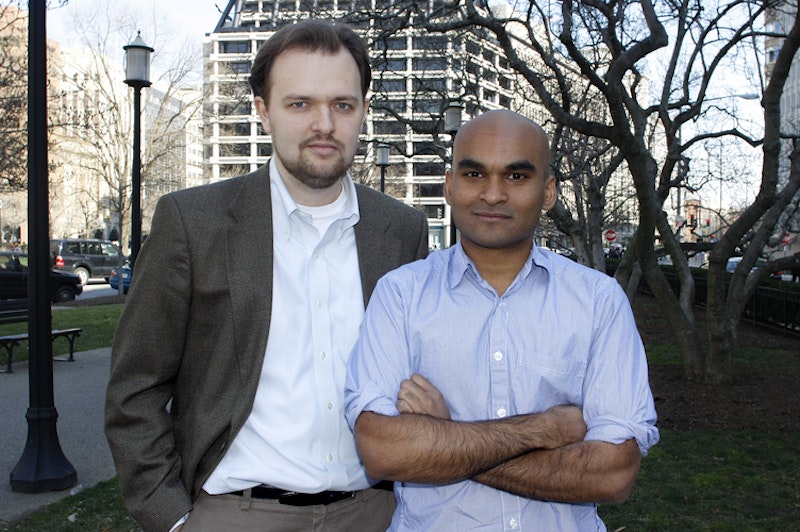 Douthat, left, with Reihan Salam, his cowriter of the book Grand New Party.

Yesterday I linked to a Campus Progress post that amassed a slew of block quotes from the college writing of on Ross Douthat, the 29-year-old incoming op-ed columnist for The New York Times. Several are a little embarrassing, some foolish, all a form of strong prose. In the comment thread of Splice's post I wrote,

While the post's authors take a snarky, reductive attitude with Douthat's early work, TM, I think the premise should be innocent enough. Take in the excerpts without the authors' commentary. It's good for the ego to be reminded of the crap you used to put your name to.

My coworker, Zach Kaufmann, felt it appropriate to then post a link to some of my college writing. A wheeze of a flame war ensued, and then died down. It was a little embarrassing forcing myself to paw through the mutterings of my youth (all of three years ago), and so empathized with Douthat-though I doubt he really cares if other people are snickering at his college writing; he is, after all, about to head over to the Times.

A more vicious thread was created in the wake of Brad DeLong's blog post quoting a rather awkward section of Douthat's book Privilege: Harvard and the Education of the Ruling Class, in which the author describes an almost-sex scene as un-sexily as possible. The commentators were ugly, deriding his sexuality and glowing with self-deluding condescension. It was a good reminder that power and positions are so often equated with personality, and for a naïf like Douthat to ascend the NYT's throne would seem a sin.

In a brief review of the same book, The New Yorker had this to say:

Douthat critiques his peers' sense of entitlement from the perspective of a cultural conservative, although his high moral tone is somewhat compromised by an eagerness to bolster this account of campus life with salacious anecdotes of debauchery, greed, and snobbery. Douthat skewers the political and sexual shenanigans of his classmates and provides a thoughtful analysis of the prevailing liberal politics of the campus. But his righteous indignation can seem misplaced, when so many of the injustices that exercise him are so petty. It's hard to get really upset about charges of button-stealing in a campus election.

Douthat is a young man. He is not yet 30 and yet has written a pair of books and tens of thousands of words of political and cultural commentary across the pages nearly every respectable news outlet. His college writing and the not-quite-sex descriptions are a good reminder, though, that he has a long way to go. This is a good thing. For all the bluff and bluster in that afore mentioned comment thread, you might be surprised to read through Douthat's cover story for The Atlantic, "Is pornography adultery?"

It takes the topic seriously, and parses the sides of the debate in such a way that would be impossible for a Maureen Dowd, Tucker Carlson, anyone at the WSJ or any network anchor to accomplish:

It's a great read through and through. A topic like this belongs in a young man's hands, pun not especially intended. You wouldn't know, from only this article, that Douthat's conservative religiousness informs his opinions of abortion and stem cell research, which of course is fertile ground for disagreement-i.e., posts from Mark Kleiman and Michael Kinsley.

I don't want to reconstruct the entire back and forth between Douthat and Kinsley over their positions on stem cell research (and issue of fertility clinics). Check out the posts for a thoughtful, if tense exchange. I personally don't have a lot of patience for them—my position is set. But for an avowed social conservative, Douthat has a razor sharp eye in picking apart the ethics from the politics.

From a piece in The New York Times:

An iron law of recent American politics dictates that any Republican setback at the polls will be quickly pinned on the pro-life movement. You might think that the Republican Party's 2008 debacle would be an exception to this rule. John McCain probably mentioned earmarks about a thousand times more often than he let the word "abortion" slip his lips. The Republican ticket's weak attempts to play the culture-war card - a Bill Ayers here, a Joe the Plumber there - had nothing whatsoever to do with Roe v. Wade. And why should abortion opponents, of all conservative factions, take the blame for the financial meltdown, or the bungled occupation of Iraq, or the handling of Hurricane Katrina?

But never mind. Pro-choice Republicans, in particular, know exactly whom to blame for their party's showing. As Christie Whitman, the former New Jersey governor and Bush administration E.P.A. chief, explained after the election, it lost because "the party was taken hostage by ‘social fundamentalists,' the people who base their votes on such social issues as abortion."

He goes on to argue, in terms that a patient liberal can digest without spewing bile. And I do mean to use hyperbole there. Remember whom Douthat is replacing. Bill Kristol's work for the Times will be best understood via George Packer's complete, utter and brutal evisceration of the man's useless oeuvre.

Douthat doesn't regurgitate Republican talking points a la Kristol or FOX News. He is, quite literally, a fresh face for an ideology, a movement and a political party that is in need of reform.

And the man knows how to write. This October op-ed in The Washington Post is near-perfect in construction:

If the global economy survives the autumn and our cable-TV companies are still in business come Christmas, Americans surfing the channels for classic Yuletide movies may finally figure out exactly whom they have to blame for the housing bubble and everything that has followed. Forget the predatory lenders, Wall Street sharks and their government enablers: It all started with George Bailey.
Yes, that George Bailey -- the hero of Frank Capra's "It's a Wonderful Life," the most popular man in Bedford Falls, the man so indispensable that he earned a private visitation from a guardian angel just to show him how dreadful a world without him would have been. It's easy to forget, so potent is the supernaturally charged final act of Capra's classic, that before he was visiting looking-glass worlds where he'd never been born or scampering through the snow and shouting "Merry Christmas!" till his lungs burst, Jimmy Stewart's George Bailey was actually a pretty savvy businessman. And it's even easier to forget the precise nature of his business: putting the downscale families of Bedford Falls into homes they couldn't quite afford to buy.
This is the substance of the great war between Bailey and Lionel Barrymore's Mr. Potter, the richest, meanest man in Bedford Falls. Potter is against easy credit and the suburban dream, against the rabble moving out of his tenements and buying homes, while the Bailey Building and Loan exists to make suburbia possible.

You can tell where the column is headed.

Douthat also comes from the stable of Atlantic bloggers, perhaps the best group of daily political commentators out there, from conservatives like Andrew Sullivan, Megan McArdle and Marc Ambinder to the singular liberal voice of Ta-Nehisi Coates. Some of them are friends, all colleagues, and if anything all have helped push the blogging medium to valid genre of political discourse. They think out loud, refining ideas and self-correcting, opening up their intellectual space for disagreement and debate.

Douthat represents a keener, younger edge to Brooksism. And that is what The New York Times desperately needs. Say what you want about David Brooks, the columnist is open to the other side's argument, and in being so has garnered a lot of access to the Obama administration. Both pundits offer a calmer form of debate profoundly lacking in the op-ed echo chamber, regardless of affiliation. (What's that I hear? Daily Kos? Please. The liberal rage expressed over there is not a shred different than the Bush-apologist crap shoveled on the pages of the WSJ and WaPo.)

A breath of fresh air this way comes. Here's to Douthat's burgeoning career, and the hope calmer voices, like his, prevail.