What if Barack Obama Were White?

It's clear that the recent surge in right-wing insanity is motivated by racial animosity. 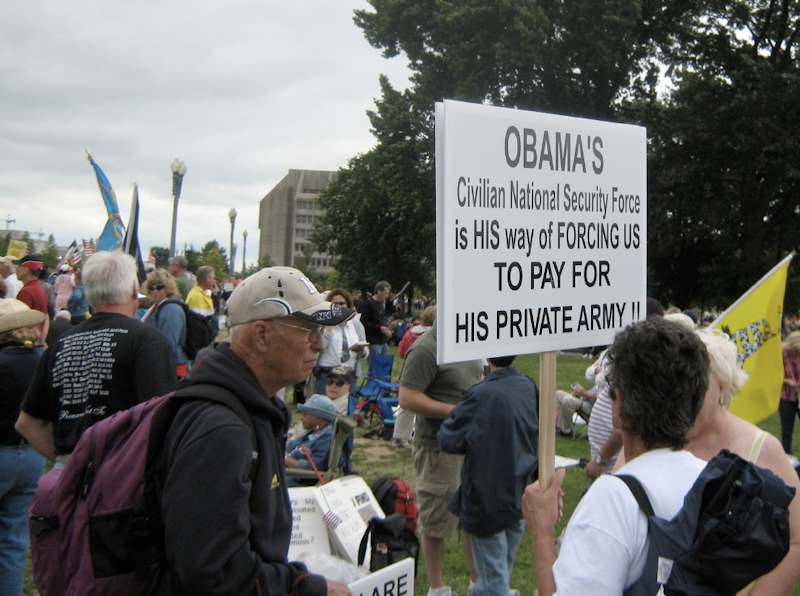 America's stupidity is on parade in all of its eccentric irony. The goofiness comes under the heading of free speech. The wingnuts and the full-mooners have taken control, or at least they've seized the noise machine and turned up the volume. So ask yourself this: Would the outbreak of lunacy be happening if President Barack Obama were white?

Demagoguery and freelance nonsense are nothing new in American politics. Nor is the coarsening of the civic discourse. Actually, they're much tamer these days than they were at the early stages of the nation. George Washington, Thomas Jefferson, Alexander Hamilton and Franklin Delano Roosevelt, to name a few, all felt the pointed end of the stiletto.

But mostly, demagoguery, or just plain ignorance, are cyclical and appear to manifest themselves with greater intensity during hard times. In the 1930s, at the height of the Great Depression, the anti-Semitic priest Father Charles Coughlin was among the first to use radio to reach mass audiences. He used the medium to spread his pro-Hitler, anti-Roosevelt bile under the heading of "Social Justice." Coughlin was eventually silenced and banished by his bishop.

In the 1950s, the alcohol-fueled Sen. Joseph McCarthy (R-WI) saw a communist in every State Department cubicle, and proceeded to divide the nation by setting neighbor-against-neighbor, even husbands against wives, until he was finally censured by the U.S. Senate. In the 1960s, Alabama Gov. George Wallace, a Democrat, campaigned for president on Maryland's Eastern shore with a populist-cum-segregationist message. He lost the state by 50,000 votes in 1968. Wallace enflamed American politics for nearly a decade until he was gunned down on a Laurel, MD, parking lot in 1972. The successor to Wallace's message was the Southern Strategy of Richard Nixon's campaign for president in 1968, which has delivered the Republican party to its wretched condition today—a regional party representing a few southern states and about 20 percent of the nation's population with hide-bound conservative legislators.

But the difference between then and now, as every political hobbyist knows, is the breadth of the global communications network and the speed at which information, right or wrong, travels. The microphone has been passed from Coughlin to Rush Limbaugh, the television camera from Walter Cronkite to Glenn Beck, Lou Dobbs and Sean Hannity and the Internet and all of its mutations to anyone and everyone. And the appeal of the Internet is the jollity of anonymous name-calling.

Beck, for example, described Obama as a "racist," and as a result dozens of sponsors cancelled advertising on his show. The one scalp he's collected is that of Van Jones, the White House green jobs aide who was forced to resign over incendiary remarks he's made over the years. Other than that, Beck prattles that the carvings at Rockefeller Center, where his office is located, represent communist symbols.

From there we get the ditzy Orly Taitz and the "Birthers," a loose confederation from another planet that believes that Obama is not a native-born American even though his birth certificate says he is. The birth certificate, they claim, is a fake. The "Birthers" even include a member of Congress from Georgia and who knows who else. Ask yourself again: Would this group exist if Obama were white? And let's not even get into the "truthers," the 9/11 conspiracy theorists, some of whom contend the United States government was behind the plot.

The "teabaggers" are another loopy fringe group. They oppose taxes and employ the "tea bag" as a symbol without realizing that the earlier rendition of the tea-dump in Boston Harbor was a protest against taxation by a foreign government, not our own. Comes next a Baptist preacher from Colorado who was posted on YouTube as sermonizing: "I pray for President Obama to die." The preacher objected to Obama's pro-choice position on abortion. Again, ask yourself: What if Obama weren't black?

And consider the uproar from the right when Michelle Obama was seen wearing shorts as she disembarked Air Force One for a tour of the Grand Canyon. There were numerous photos of Jackie Kennedy yachting in shorts. But that's okay. Kennedy was white. So is Michelle supposed to wear a ball gown on vacation to cover her ebony legs?

Another manifestation of the current wave of craziness is the resurgence of the gun nuts. Who, in any other era, would have believed that gunslingers and militiamen would show up at a presidential town hall meeting wearing sidearms and brandishing semi-automatic rifles? The rationale: The law allows it (in certain states). Nobody was seen packing heat when George W. Bush came to town to bamboozle the citizenry. The Secret Service has confirmed that threats against Obama's life are four times the normal number against a president.

The election of Obama and the proposal to reform health care is supposed to have reinvigorated the religious right, that amorphous collection of unconsecrated zealots that cuts across denominational lines, which was pronounced pretty much disheartened and dissipated after last November's Democratic romp. The religious right is mainly a fundraising machine to oppose the policies of Obama (and other Democrats) and fatten the moneybelts of its self-appointed leaders as well as to animate the cause. But instead of following the teachings of Christ and the Scriptures, the right flank has created a theology out of opposing abortion and same-sex marriage. And add for good measure, all things black.

But the most bizarre behavior of all the wack-a-do performances was the outrage over Obama's planned talk to America's school children. The claim by the right: Obama intended to indoctrinate the kids with his socialist agenda. The drive was spearheaded, in part, by the chairman of Florida's Republican party, Jim Greer, who urged a national school boycott of the speech. When Obama's speech turned out to be motivational and inspirational and totally devoid of politics, Greer accused Obama of switching speeches. When asked if he knew that for sure, Greer answered: "No."

And now for health care reform. This is Obama's signature issue, the very definition, and perhaps downfall, of his presidency. He has said that he intends to reform the system even if he's a one-term president because of it. The issue, from the flush-faced rage at town hall meetings to the GOP signals of opposition in the House chamber on Obama's speech night, has become an emotional matrix for every grudge and gripe in the American lexicon, from unemployment, to mortgage foreclosures, to taxes, the high price of gas, to over-the-edge religious fanaticism. And, yes, don't forget race.

Yet most rational people, including Obama, acknowledge that the entire medical care system is an elaborate shell game. To wit: Here in Maryland, for example, there are 780,000 residents, give or take a few hundred, who lack health insurance of any kind. Under Maryland law, no hospital can refuse a patient medical care because they are uninsured. According to the Maryland Hospital Association, there were 2.4 million emergency room visits to Maryland hospitals in the fiscal year ending June 30, 2009. Of those, about 500,000 patients had no insurance. Hospitals alone provided $287 million worth of what they call charity care in that same year, according to the MHA.

To cover the uncollected debt, the Maryland Hospital Cost Review Commission—a regulatory agency that is unique in the nation—added $900 million to the hospital rate structure this year, which, in turn is billed back to subscribers of health care plans. Put another way, a recent Johns Hopkins Hospital study concluded that every health care subscriber in Maryland pays $2300 off the top of their insurance bill just to cover the cost of uninsured individuals.

Extrapolate that nationally and you get the picture. If only Obama weren't black.

Frank A. DeFilippo, press secretary to former Gov. Marvin Mandel, has been writing about politics for decades as an award-winning Maryland State House and political reporter, White House correspondent for the Hearst News Service and as a columnist and contributor for several newspapers and magazines as well as a TV and radio commentator. DeFilippo has reported from six national political conventions.