The War On Terror, Domesticated 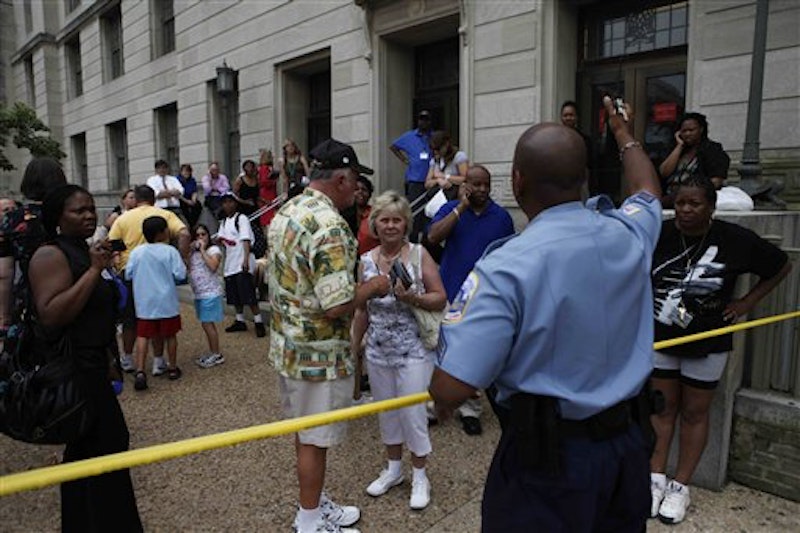 “The War on Terror is over.” I actually wrote those words—albeit a touch tounge-in-cheek—last August, and it’s funny because it seems almost anachronistic at this point. The War on Terror has never been anything more than a rhetorical device, and as the grammatically-minded among us pointed out, you can’t really declare war on an emotional state or a method of violence. But now, the “war” is over for real over because the Obama administration has apparently stopped using the term, rendering it a loaded motif of the past.

The impact of the last terrorist attack on U.S. soil no longer results in ratcheted-up security, weeks of 24-hour news coverage on loop, intense self-reflection, or the permeation of fear and mistrust. This is all the more surprising given that the last terrorist attack on U.S. soil happened last week. Whatever your definition of terrorism is, this act fits the bill. It was an act of violence meant to frighten and intimidate a civilian population on behalf of a political and an ideological belief (in this case, anti-Semitic white supremacy).

The attack’s failure to inspire fear, cause pandemonium, or last more than a week in the news cycle is a victory against terrorism and a testament to the strength of our national character. As far as I can discern, there weren’t even any journalists or members of the infotainment commentariat discussing our amazing national resolve in the wake of the incident, even though it was only a few weeks removed from a separate failed terrorist attack.

I mean, people weren’t even worked up! It was as if the entire nation buckled down and said “We’re not letting these wackos hijack our country and intimidate our people. We won’t let them win, and we will keep our lives going as if nothing happened at all!” It shows how much we’ve matured as a nation since the events of Sept. 11, 2001.

What an amazing moment. That is unless… unless… unless no one actually gave a fuck. And instead of overcoming their fear, most Americans didn’t care because they never felt targeted in the first place. And, honestly, that creeps me out a little bit.

First—to be crystal clear—there is no real comparison between the most recent terrorist plots and what transpired nearly eight years ago. One person has died in the stead of thousands, no monument has crumbled, and there are no horrifying images to accompany the attacks. A foreign threat is always scarier than a domestic one because a foreign threat feels so distant and uncontrollable and unknown.

Plus, domestic terrorists have the benefit of being easily explained away. They are cast as nutjob loners, crazies out of touch with reality (as if foreign terrorists are the paragon of mental well-being), even by their ideological brethren. The underrated, seemingly forgotten Arlington Road feels like the last time we had a discussion about domestic terrorism with ourselves, and that was a decade ago. Every act of violence by extremists in this country is not a “lone incident.” I agree with this post by The Atlantic’s Jeffrey Goldberg—the radical intolerance found in both the extremist far-right and homegrown extremist Islam need to be discussed and addressed in this country.

When you compare the rhetoric of the Bronx plotters and that of the man who murdered a military recruiter last month, they are strikingly similar. When you compare the Bronx plotters to James von Brunn, they share the same fanatical ideas about Jews. This violence is part of a larger picture and most of the country seems to think it doesn’t affect them. I’m Jewish, so theoretically, I’m the one that’s supposed to be scared (along with members of the military—but, like, they’re armed at almost all times). After all, the vitriol is directed at my people. Yet, the recent spat of extremist violence has claimed two lives (three if we rightfully include Dr. George Tiller) none of whom were Jewish. Extremist violence affects us all.

Yet, I can’t shake this feeling that people aren’t taking it seriously. I don’t know if it’s because the death count is too low or because the Bronx plotters were almost comically stupid or what. Maybe it’s because a small minority has been singled out as a target, a minority that may even seem distant or unheard of in the thousands of small towns around this country where people live their whole lives without meeting a Jewish person. Whatever it is, people need to realize that they are targets just the same as I am.

If you don’t feel like sleeping tonight, read this horrifying Salon article. Our government is tacitly allowing white supremacists into our armed forces. They are getting access to the best military training in the world, which they say they will use to start a revolution in this country, and the best weapons, some of which they have tried to steal. But because they look like your average American, albeit with some extra tattoos, this threat doesn’t appear to have been taken seriously. The presence of a familiar face combined with a need for soldiers has caused them to overlook their own fucking report.

There is not much you can do to combat these homegrown terrorists and hate-mongers, except treat them as if they were foreigners. Take threats seriously. Infiltrate, as was done in the Bronx case. Monitor the hate sites and the prison rings. Most of all, we need to stop thinking about these terrorists as exceptions or nutcases and start realizing the pattern: there has been too much violence already from a surprisingly similar group of mindsets, and we need to stop them.