The Village Voice is Written off 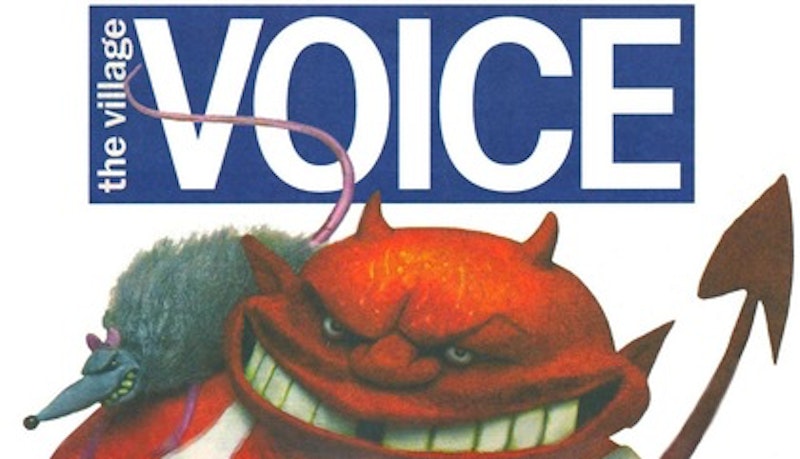 The last week of December poses a challenge for weekly magazines—that’s why there are so many “double” issues, although these days they’re more like “half” issues—since subscribers are inevitably occupied with the holidays and don’t do much reading. Nevertheless, it was quite curious to see Louis Menand’s flawed and perhaps unintentional obituary of The Village Voice in the Jan. 5 edition of The New Yorker, a publication that’s normally above larding its pages with such filler. Menand’s article, “It Took A Village: How the Voice Changed Journalism,” was, I suppose, a useful primer for people under the age of 35 who have no recollection of when the Voice was the country’s most storied weekly, but I doubt The New Yorker attracts many such readers.

As for the rest of us, Menand’s history of the Voice’s founding—as well as Greenwich Village’s cultural eccentricities and continual turnover of residents—and its first 15 years was an evergreen that could’ve been published at any time in the past two decades. There was virtually nothing new in the long essay, or couldn’t be found in the late Kevin McAuliffe’s superb 1978 book The Great American Newspaper: The Rise and Fall of the Village Voice, the definitive biography of the Voice that Menand, to his credit, does cite several times in the course of his rather dull exercise in hagiography.

Don’t get me wrong: I agree with Menand that the Voice was, for a period longer than most publications, utterly alive with diverse opinions, acute observations from idiosyncratic writers shunned by the era’s elite media, and arts criticism and splendid writing on pop culture ephemera that today can be read as a fairly reliable history of the late 1950s and 60s. I first started reading the Voice as a 10-year-old living on Long Island—the paper was founded in 1955, the year I was born—and its influence upon my own career as a publisher and editor of three weekly newspapers was profound.

In fact, it was the decline of the Voice into a largely homogenized, left-of-center paper in the early 1980s that led me to start a competitor in Manhattan, New York Press, in 1988, a weekly that at least for a short time gave the Voice a minor kick in the pants. (The Voice in 1988—then owned by multi-millionaire Leonard Stern, who had bought the title from Rupert Murdoch three years earlier for $55 million—was a cash cow, flush with advertisers and had a paid circulation of about 160,000, a number that dwindled precipitously in the mid-90s. It switched to free circulation in 1996.)

And while I agree with Menand that the Voice’s founding editor Dan Wolf was a far more influential figure than he’s given credit for—along with The Wall Street Journal’s longtime editorial page editor Robert Bartley, Wolf was, to me, one of the true giants of journalism in the second half of the 20th century—the notion that the Voice “changed” journalism is rather grandiose and exaggerated. Despite my own narrow fascination with and immersion in what was once called “alternative journalism,” a stronger case can be made for men like H.L. Mencken, Henry Luce, Harold Hayes, Tom Wolfe, Bob Woodward, Murdoch, Hugh Hefner and the young Jann Wenner for the distinction of transforming the ancient craft.

It’s ironic that last week the Voice laid off Nat Hentoff (this occurred after Menand’s paean was already in print), the 83-year-old civil libertarian and jazz expert who wrote for the paper since 1958, a “name” writer who for many was the sole reason for still picking up the paper or visiting website. In an all-too-frequent reminder of the newspaper industry’s turbulence, the flailing New York Times, on Dec. 31, reported the news of Hentoff’s departure, and described the Voice, in the first sentence, as “troubled.” Menand, an author and essayist who’s also a Harvard professor, mat be the last person among the intelligentsia who hasn’t received that bulletin, for in the course of his New Yorker essay he alludes just once to the dubious future of newspapers, whether daily or weekly.

But perhaps I’m mistakenly taking Menand at face value when he writes with such gusto about a culture, both journalistic and popular, that no longer exists. It could be that his article was the equivalent of any major newspaper that prepares obituaries for the famous—statesmen, celebrities, scientists and the like—who are in their dotage. For example, it’s a given that someone at The Washington Post has already written the pre-obits for notables such as Henry Kissinger, Yogi Berra, Ted Kennedy, Clint Eastwood and Gloria Steinem. When William F. Buckley Jr., who also “changed” journalism, as well as conservative politics, with his biweekly National Review, passed away last year, one click of a computer file brought up his canned obituary, in need of just the particulars of his death.

It’s difficult to discern Menand’s intentions. In the last paragraph of his piece, he writes: “Of course, [the Voice] will share the fate of every other print medium in the digital age, whatever fate that is… Until [the Voice’s] own success made it irresistible to buyers who imagined that they could do better with a business plan than its founders had done from desperation and instinct, it had the courage to live by its wits.” That sounds like a death notice, although Menand neglects to mention that during the tenure of owners Murdoch and Stern the weekly was much more profitable than under its founders Wolf and Ed Fancher. It’s possible that Menand isn’t even aware of the paper’s current proprietor—the embattled Phoenix-based chain Village Voice Media—which, in retrospect, was unwise in acquiring the Voice and its sister weeklies in 2005, a rare lapse in judgment on the part of Jim Larkin and Michael Lacey, VVM’s principal owners.

I’ve no idea of Menand’s reading habits, but it’s clear that weekly newspapers aren’t among the periodicals he favors. How else to explain this tremendous blunder, in explaining how the Voice in the 60s was the model for other “underground” weeklies across the country: “But, after 1970, the alternative press died out. This was partly because people stopped demonstrating and smoking dope, and started reading the New York Times…” Obviously, people didn’t stop smoking pot in the early 70s, but more egregiously, Menand is apparently unaware that radical “underground” papers like The Los Angeles Free Press and Berkeley Barb begat a new kind of weekly, papers like The Chicago Reader, Phoenix New Times and L.A. Weekly, which, until recently, were staples in their respective cities and not only produced excellent journalism but made a lot of money as well.

Menand also claims that the mainstream press, aping the weeklies, discovered “youth culture” in the early 70s and hired men and women who understood the prevailing popular culture. In fact, it was the slow learning curve of the daily newspapers that opened up a market for the second wave of weeklies, papers that provided extensive events listings, affordable advertisements for small and independent retailers, free classifieds and intelligent arts criticism. The daily newspapers, contrary to Menand’s assertion, never did get the “youth market” right and in city after city produced competing free papers that were laughable imitators of the weeklies.

Today, this is very nearly a moot discussion, as no print product is in very good shape. Still, one doesn’t expect such a sloppy article such as Menand’s from The New Yorker—perhaps the magazine’s fact-checkers were on vacation—and it certainly muddies the history of not only The Village Voice, but also the weeklies that it inspired.