The U.S.'s Torturous Legacy in Iraq

No one should be surprised that last week’s shoe-thrower claims to have been tortured while in captivity. 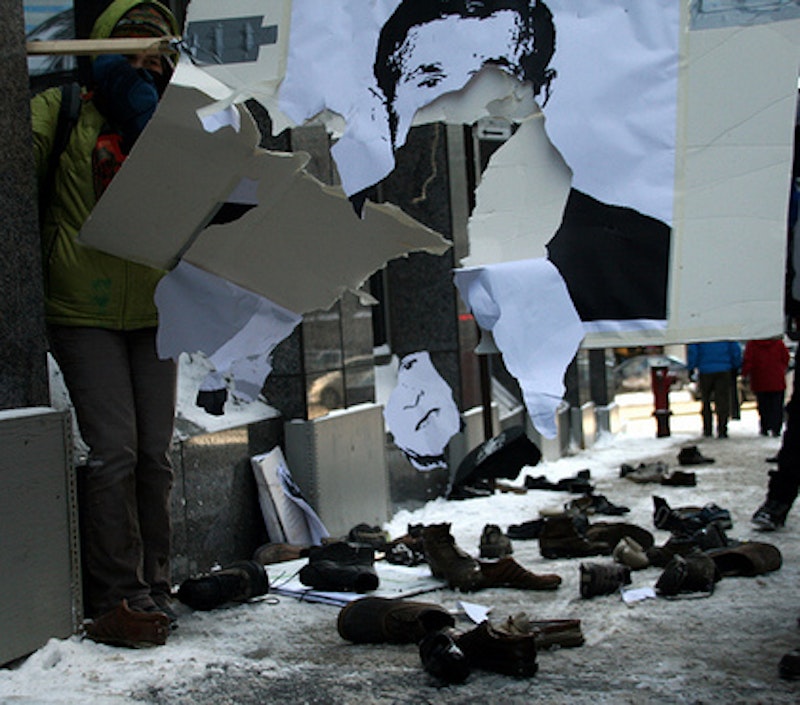 Muntadhir Al-Zaidi, the Egyptian shoe-throwing journalist being held in an Iraqi prison for throwing his shoes at President Bush during his recent visit to Iraq has, according to his brother, who recently visited him in prison, been tortured. As a result:

Uday al-Zaidi said his brother had said: “After the torture and the cold-water shower, I told them to bring me a blank sheet of paper and I would sign it, and they could write whatever they wanted. I am ready to say I am a terrorist or whatever you want.”

While tempting, we should not dismiss the repeated beatings of al-Zaidi as acts of lone interrogators. Torture has been a hallmark of the U.S.-led War on Terror since at least as early as 2002, when Guantanamo Bay opened. Detainees there are held in extreme isolation, without contact with outside family members or lawyers; blindfolded; subjected to “stress positions”; sleep-deprived; exposed to loud music and extreme temperatures. Torture, after all, is not simply the infliction of physical pain—it involves separating the victim from reality, denying their individuality and breaking them down completely in the hopes that they might admit to an alleged wrongdoing. Often, however, as in al-Zaidi’s case, the victim will be willing to say anything to make the torture might stop.

This is the point that people often miss about why governments (including ours) use torture. It’s not that we really believe we’re getting sound information. Those who are tortured are often willing to say anything at all, even confessing to crimes that they did not commit, in the hopes that the torture will cease. Governments then take those sham confessions and hold them up to “prove’ that the torture was effective and that a criminal had been outted. That’s what Hitler did; it’s what Stalin did; it’s what North Korea still does. And now, apparently, it’s what the U.S.-backed Iraqi government does.

And that, of course, is to say nothing of the semi-documented cases of the U.S.’s “extraordinary rendition” plan, in which American agents kidnap suspected terrorists from foreign countries and ship them to various countries around the world where US jurisdiction—and rules against torture—do not apply. Detainees are held indefinitely and have no recourse to lawyers or to the Red Cross. Many victims of this program claim to have been tortured, and in 2005 an Italian judged issued arrest warrants for 13 CIA agents relating to the alleged extraordinary rendition of Hassan Mustafa Osama Nasr from Italy to Egypt.

The U.S. brand of torture is not the result of poorly supervised low-level guards run amok. The Senate Armed Services committee recently published a report that notes that the abuse of prisoners at Abu Ghraib “was not simply the result of a few soldiers acting on their own,” but, according to The New York Times, “grew out of interrogation policies approved by Mr. Rumsfeld and other top officials.”

That Iraqi interrogators would beat a man, accused only of throwing his shoes, so severely that he allegedly was ready to admit to being a terrorist, is hardly surprising given the close association between American forces and their Iraqi counterparts. If Americans are willing to mistreat our own prisoners, why would we expect our Iraqi allies to treat theirs any differently?

In his haste to explain away the beating, Iraq’s Prime Minister Nouri al-Maliki alleged that the mastermind behind the shoe attack was a “person…known to us for slitting throats.” He declined to provide a name and did not elaborate any further. But even if the “confession” happened, what can we say of a government that accepts such a confession and holds it up as justification for its violence?

Torturing has never been about acquiring reliable information. It’s about cowing your opponents, real and/or imagined, into submission; and it’s about governments trying to legitimize oppressive tactics by conjuring fake confessions from battered inmates.

I hope, going forward, that the Obama administration can eliminate use of torture in its prosecution of the global War on Terror. I’m afraid that, in Iraq anyway, it might already be too late.